I had alluded to this at least once before, but isn’t it interesting how black metal seems to be the only genre that has been indelibly associated with a specific climate and time of year? This art form that had its roots in the thrash and death metal of the early 80s, got twisted into something more harsh and unforgiving by bands in such disparate locales as England and Brazil — but really was given the unique characteristics we associate with it today, when it had again been transformed in the hands of a bunch of Norwegians in the early 90s. Ever since then, thinking about black metal almost invariably conjures images of a “land of ice and snow”: some of the areas that have developed pockets of practitioners within the genre have included Norway and Sweden, the American Pacific northwest and midwest, Canada, New York and New England — and Louisiana.

No, you didn’t read that wrong. Today we’re discussing a pair of bands who are based in a state that is well-known for having hurricanes and Mardi Gras celebrations; Cajun and Creole culture and some of the biggest sludge metal bands in the world; and of course, for inventing Tabasco sauce. But one thing nobody associates with Louisiana is frigid, wintry weather. Nevertheless, these bands both manage to produce a convincingly bleak, black atmosphere, imbued with plenty of interesting twists like you’d expect to hear from many of their counterparts from further north: Barghest (Baton Rouge) and Withering Light (Hammond).

These two bands put together a split record — each contributing one song approximately four minutes long — which was released digitally back in October (a time when the average high temperature is “only” around 81 degrees in the southern part of the Pelican State). Shortly thereafter, a third track was added to the digital version, which effectively doubled the total length of the release. Since that time, I’ve listened to these three songs several dozen times — not just throughout what seemed to be the longest winter ever, but in the several tumultuous weeks that followed (bouncing between light jacket in the morning weather, to shutting off the furnace weather, back to heavy coat and HEY is that snow out the window?? weather, to light jacket weather again, and to OH MY GOD it’s so hot and humid I want to die weather, then back to comfortable spring-like temperatures once more — your guess is as good as mine how long this latest stretch will last; season changes here in southwestern PA are always such a delight!), so I can personally vouch for this being a brand of black metal that holds its own regardless of how cold or hot the climate may be.

Let’s start off with Barghest, even though theirs is the second of the three songs in the track listing (or essentially, the “side B” of the original pair of tunes). Many of you will be familiar with this band (whose name comes from a ghostly hound from English folklore) already — either from their 2012 split with False or their fantastic full-length from last summer, each of which had been released by Gilead Media.

Their portion of this split, entitled “Carrion”, is a new recording of an old song- like eight years old, or so I’ve heard. With punk-like ferocity and production values that hearken to the old lo-fi vibe that has long been one of the hallmarks of the genre, Barghest very well may be paying tribute to the swampy bayous for which their home state is famous. In any case, as the rasped vocals tear through the relentless barrage of cymbals and crestfallen guitar riffs, the overall impression is a sickly, bleak picture: one can easily imagine the image of the title, a rancid mass of barely recognizable bones and bits of fur, being wantonly ripped apart by some scavenger (perhaps the crow whose cawing makes an appearance at the song’s midpoint?) 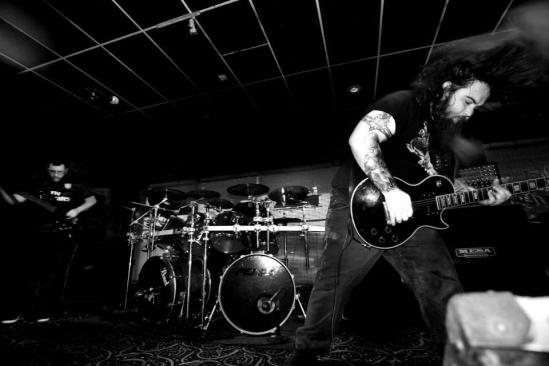 Bookending that track are the split’s A side, “Lantern”, and the digital-only cherry-on top, “Noose Hymn”, both courtesy of Withering Light. This band, perfectly named for its style if you ask me (and once again, by reading crap that I write, you tacitly ARE asking me), appears on record here for practically the first time in their three-year history (with the exception of one free single earlier in 2014), so you’re forgiven if, like me, you hadn’t already been familiar with these guys. However, if that’s the case, you probably will want to remedy that asap — starting with the 75% of the material on this record that they supplied — and then start getting excited for their debut LP, expected to be completed sometime later this year.

The first song opens with some almost-cheerful-sounding guitar chords — maybe not quite major-key, but there’s at least some extra 4ths or something thrown in there to give it a bit more of a harmonious feel — overtop a vaguely black-n-roll rhythm. This gives way to some more traditional-sounding blackened harshness, with suitably gruff vocals; to keep things interesting, we’re treated to some cool synopated parts as well as some soaring guitar leads both of which bring to mind some of my favorite things about Cormorant), before briefly returning to the intro motif (but this time with the kick-drum part doubled from the earlier tempo).

Then we come to the bonus track — much slower and darker than those that had come before, which is rather fitting considering its subject matter. The lyrics here — between those that literally carry the narrative (“ascend the staircase…”) and those that figuratively describe the feeling in such a situation (“like a viper’s kiss, slowly crippling you”) — very well could have accompanied Hector Berlioz‘ “March to the Scaffold” (although, as evidenced by the sounds representing a falling blade and a bouncing head near the end [around 4:05-4:12 in this recording] of this particular piece of music — metal as fuck, no? — the scaffold here is surmounted by a guillotine rather than the gallows mentioned in Withering Light‘s composition). Anyway, out of nowhere, about three minutes in, the bass (which up until this point had been offering up some pretty interesting counterpoints to the guitar parts) suddenly takes center stage as everyone else drops out briefly — developing into a bit of a follow-the-leader riff (bass only, then bass plus guitar) that is vaguely reminiscent of some sort of theme music from an old spy movie or something. An even more interesting shift occurs just after this, where the guitar part returns to a more classically “black metal” feel but the bass continues with a shuffling jazzy pattern — these two ideas alternate back and forth for a little bit, before the whole band really pumps the brakes, entering into some super-heavy low-tempo blackened doom territory. When this happens a second time (after a couple faster sections), the lyrics from the beginning of the song are revisited, even heavier and dripping with more of a sense of dread this time.

You can listen to these tracks at Bandcamp, and buy yourself a download (only $3!) there too. There have been some whispers recently about this split (just “Lantern” and “Carrion”) coming out as a 7″ soon, so stay tuned for that (but be sure to grab a copy in both versions, so that you don’t miss out on the masterpiece that is “Noose Hymn”!)