Hey — remember a few weeks ago when I wrote about a split record by Barren Womb from Norway and New Haven’s Grizzlor? Maybe you missed it because it was only a couple short paragraphs, buried among reviews of two Bardus albums. Whatever the case, in that article (which you can find right here), I pointed out how the two songs contributed by the Connecticutian band were nasty and punky but also just catchy enough to make one want to check out more of their stuff. Well I didn’t realize it at the time, but there wouldn’t be a long wait to be able to do just that — in fact, technically it was a negative amount of time, since that article was published almost a year after the split with Barren Womb was released, and in the meantime — about seven months later, but still a few months before I wrote the article — Grizzlor had already put out another 7″ record.

Today I’m going to discuss that record with you, and I’ll also throw in some words about a brand-new album — due out next Friday from Grimoire Records — by Rhin from Shepherdstown (a small town at the easternmost tip of West Virginia, near the border with Maryland and Virginia). As an added bonus for those readers who live near Philly, Brooklyn, or New Haven, these two bands will be performing in your city this weekend! Further details on those shows will be found at the end of the article. But first, let’s talk about some music …

Grizzlor‘s Cycloptic 7″ is made up of seven tracks, and every single one is under two minutes long. Each of these bursts of angst is every bit as gritty and nasty as the band’s previous release, and often even more so. None of the riffs are overly complicated — again, I’m inclined to reference a hardcore/punk basis for the music here, fast and angry and to-the-point. Also emphasising a hardcore influence is the sound of the yelled vocals; the pissed-off tone definitely brings to mind Mr. Mike IX Williams — but not exactly the vitriolic, nihilistic sound associated with Eyehategod; rather, the frustrated storytelling and ranting style found in Corrections House.

That delivery turns out to be the perfect vehicle for the attitude and overall message of Cycloptic: with titles like “Sundays are Stupid” and “I’m That Asshole,” these songs are full of mild hatred blended with resignation, a strong dose of futility, and a bit of ennui. These feelings are sometimes expressed in specific terms — like in “Winter Blows” which follows a sampled weather report with a dissertation on how much it sucks to be cold and miserable — and elsewhere aimed at a much broader target — for example the song “Life’s a Joke” which opines that “everything you do or say is a goddamn joke” or even the final track “Starship Mother Shit” which summarizes the whole of existence by essentially saying “Beam Me Up, Scotty” because this whole place sucks. 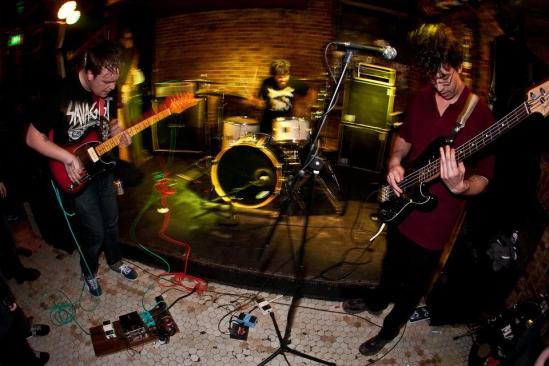 The Rhin album Passenger also contains seven tracks, but in this case all of them are greater than two minutes in length. Like the Grizzlor material, several of these songs — particularly the first few, like the Unsaneish “Unwell” — are noisy, fuzzy, fast-paced, and explosively punky. Angry and dark, it feels like it would be appropriate to call this a hardcore/stoner/fuzz/punk hybrid. It’s a funny thing, though, throwing that word “stoner” into the mix when something seems so aggressive, even though it’s so often used as a genre description with stuff along these lines. It’s like when they have a character who seems very agitated and confrontational on one of those poorly-written crime dramas on tv, and they imply that this individual is currently high on marijuana. Makes you wonder whether those writers had ever known anyone — had ever seen anyone, even — who had smoked weed. But anyway, let’s get back on track here …

About midway through the album — the fourth song “Snivlem” starts out slower, with a meanderingly driving bassline and then develops into a dirty, grungy, feedback-drenched downer anthem — the song structures start to become somewhat more varied, and other influences start creeping in. “Clay” continues in a similar vein, yelly and grungy, but then in the middle of the song this cool groovy instrumental section breaks down and then gradually builds back up again, steering into more of a post-grunge territory, sounding a bit like Filter and their mid-to-late-90s peers. In fact, closing track “Bad Timing,” both in its trippy, psychedelic, slightly-off-kilter first couple of minutes, as well as the heavier and more anthemic part that follows after the song kicks into a higher gear, even sort of resembles the vocal style of that band’s Richard Patrick.

Cycloptic is available to buy right now on 7″ vinyl or MP3 format here; the Passenger LP or cassette can be pre-ordered from Grimoire right here.