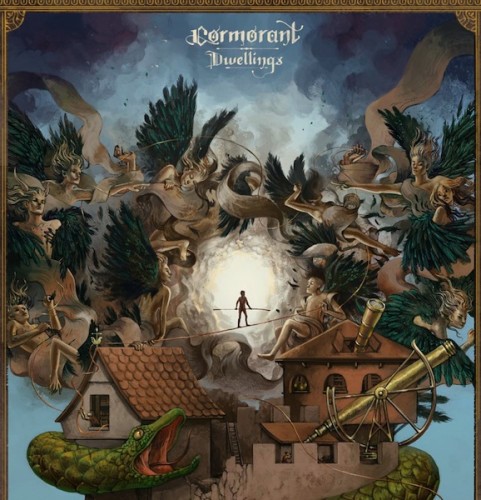 This is awesome news for anyone who, like myself, may have accidentally missed out on the deadline a couple months ago for pre-ordering the new album by Californian blackened progressive metal band Cormorant, Dwellings, due to be self-released on 6 December, 2011.

While we may now be out of luck in regards to some of the elements from their totally awesome packages that were being sold the first time around (a signed poster of the full album cover – one panel of which is visible above, but which can be seen in its full glory here; exclusive downloads of unreleased demo materials; inclusion of our names among the credits in the accompanying booklet; etc.), at least the meat of the previous offerings (digital download of the album, CD digipack, t-shirt or sweatshirt with the album artwork) are once again available to pre-order in various combinations.

If you’ve heard the band’s previous offerings – 2009 LP Metazoa or 2007 EP The Last Tree, then clearly you don’t need any more convincing that Dwellings is going to be a must-own.  No, all you need is a link to the preorder page, which is conveniently located here, at Bandcamp.

If, on the other hand, you are a newcomer to the Cormorant experience, well I’ve got a real treat in store for you to get yourself educated…

The band’s somewhat outdated bio (the story ends shortly before their album of two years ago was released) from their Facebook page describes their sound as a blend of “the black, death, thrash, doom, and folk metal sub-genres while still referencing the formative influences that make Cormorant’s music unique.”

I have no problem introducing a blues-based guitar solo into a Norwegian black metal piece if the song calls for it. Why worry about rules?

Drummer Brennan Kunkel expanded upon the blending of what would seem to be contrasting ideas into a cohesive whole:

You need a balance of brutality and beauty to fully appreciate both.  If I’m dropping blast-beats the whole album, it all ends up sounding the same, and it’s not scary or impressive anymore.

Sometimes you have to lull your listeners into a false sense of security.

But, better than any description of their sound that any of the band members, or I, could write, you can allow the music to speak for itself.  First of all, both of the band’s previous releases are currently available from Bandcamp; one as a free download:

…and the other as a pay-what-you-want download (but if you click through to the site, you can also buy a CD and/or t-shirt)

…and to really sweeten the deal, if after all of that you STILL are unconvinced you need to buy a copy of Dwellings, the whole she-bang is currently streaming here at NPR for your listening pleasure.

Now go get to listening, and then hit up that preorder link!  (Here it is again, for your convenience).