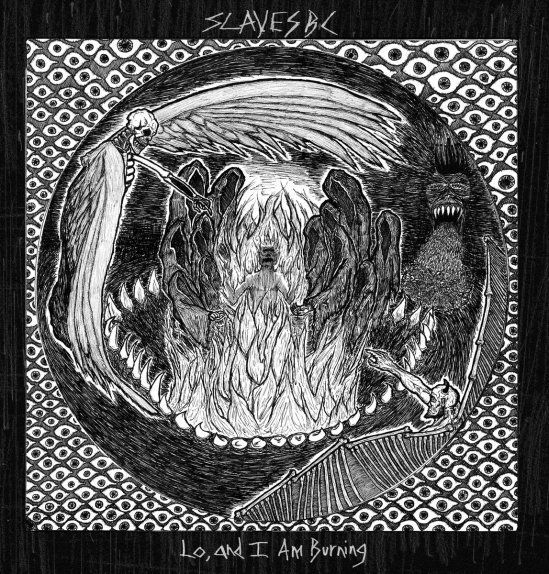 The new record from Pittsburgh’s blackened hardcore doom juggernaut Slaves BC officially hit the streets about a week and a half ago. Considering this writer’s lengthy history of covering the band, it’s pretty shameful that I haven’t gotten around to writing about this one much sooner. Especially in light of their last album All is Dust and I am Nothing landing so high on my list of 2016’s top releases. And yet, “The world is an ugly, ugly place. Virtually everything and everyone in it is awful.” I used that line in a different review just a few days ago, but that axiom is a terrific way to succinctly summarize why I haven’t managed to write more often over the past few months.

Coincidentally, it also describes Lo and I am Burning to a “T” (as well as the general underlying themes upon which the album is based). Two quick spoilers: first, Lo marks a huge step forward for a band that has essentially dropped all the other descriptors that used to follow “blackened”; and also, this is going to be a strong contender once again when year-end rolls around. Here, we’ll take a look at the album in slightly more detail, and that’ll be followed by the info about the band’s record release show — which will be coming up in just a couple weeks here in Pittsburgh, featuring Vile Creature (whom we’ve also discussed quite recently) and Imperial Triumphant (who you can expect to hear much more about on this site in the near future)!

END_OF_DOCUMENT_TOKEN_TO_BE_REPLACED 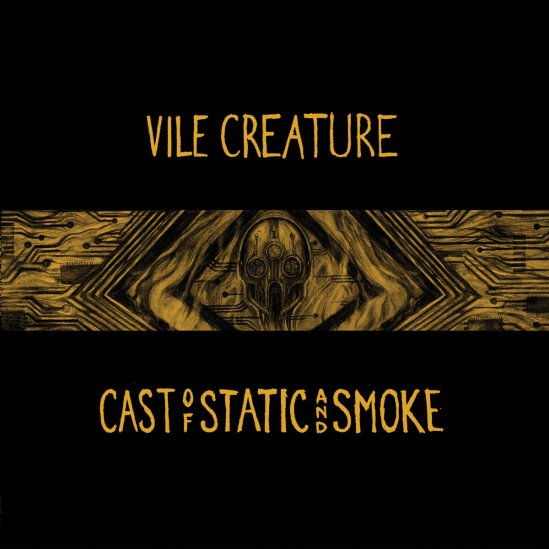 Today we’ve got another album review for you — and a worthy follow-up to yesterday’s, as this one also contains long, low-tempoed tracks filled with filthy noise and despair. Although it’s actually their second full-length, Cast of Static and Smoke is the first output I’ve heard from these self-described “two weird queer kids with lofty ambitions.” But from that very first listen, Vile Creature grabbed my attention and never let it go throughout four tracks spanning nearly three-quarters of an hour. Let’s dig right in, eh?

END_OF_DOCUMENT_TOKEN_TO_BE_REPLACED

The world is an ugly, ugly place. Virtually everything and everyone in it is awful. At least, that’s often how it feels. And at such times, it can be helpful to have something pleasant and soothing to comfort you. But it can also be helpful to experience something every bit as ugly and awful, like a giant mirror that reflects the misery and vileness, and just drown yourself in it. Denver’s Primitive Man are pretty far from serving the former purpose, but boy do they ever make up for it as the latter.

Presumably you’re already familiar with the utterly spirit-crushing noise this trio produces, but just in case you’ve missed out, here we covered a 2014 split record and their 2015 EP Home is Where the Hatred Is, and then over here we dealt with another split record from 2016. The Home EP found its way onto my list of 2015’s top releases, where it would later be joined by its successor Caustic in the list for 2017.

That Relapse-relased record that dropped this past October is what we’re addressing today. Read about it, then watch a couple videos (but not at work, or at school, or near any small children, or in public, or around your parents, or in church…) and then finally, down at the bottom of this post you’ll find an extensive list of upcoming shows all over North America, the United Kingdom (with a one-off expedition over to Israel in the middle) and then all over North America again!

END_OF_DOCUMENT_TOKEN_TO_BE_REPLACED 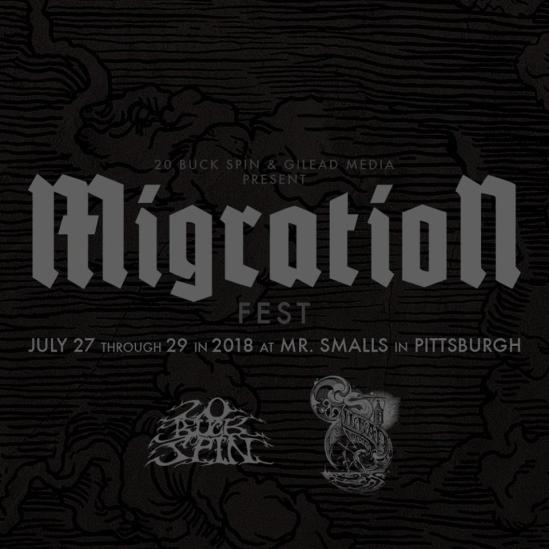 Back in December we told you that this year Gilead Media + 20 Buck Spin‘s extravaganza Migration Fest would be coming to Pittsburgh in July. At that time the majority of the line-up had been announced. Well, within the past week, the remaining holes in the schedule have been filled in, and tickets have gone on sale! There are some names here we’ve written about before, and several more that we plan to sometime in the near future. Stay tuned for that. But in the meantime, check out the complete updated list down below, and then grab your tickets before they all sell out!