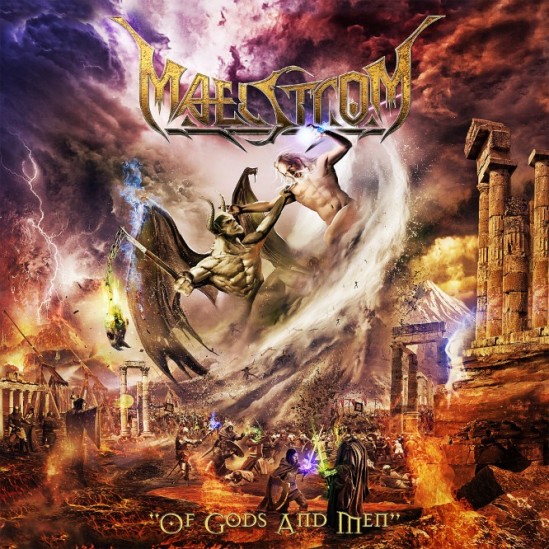 Hey, folks. Better make sure you’ve got yourselves strapped in, because we’re taking a trip in the “Way Back Machine.” Although Of Gods and Men, the debut full-length album of Long Beach (Nassau County NY)’s Maelstrom, was released mere days ago, this is a story that starts off much, much earlier than that.

Here at Valley of Steel I first became aware of this trio back in October 2012, when I checked out ThrashHead Magazine‘s second A Gallery of Rogues compilation. (As an aside, the magazine doesn’t appear to exist anymore but that 45-song collection is still free to download.)

At that time, one of the tracks that I pointed out as a highlight was “Arise” — which also appeared on the band’s EP It was Predestined, which was being re-released that same month by IME.

I hadn’t been aware of it at the time, but the mini-album had initially been released independently several years earlier (in 2008), by a newly-reformed Maelstrom. The group had called it quits fifteen years prior to that, after having produced a pair of demo tapes (in 1989 and 1991) that collectively featured the original recordings of the three songs that would later become It was Predestined.

The EP, out of print by now, had grabbed my attention back in 2012 just as much as that first song had done — and so when I recently learned that there would finally be a full-length record (32 years after the band was founded), well, that was certainly some exciting news I just had to share with you lucky readers.

END_OF_DOCUMENT_TOKEN_TO_BE_REPLACED 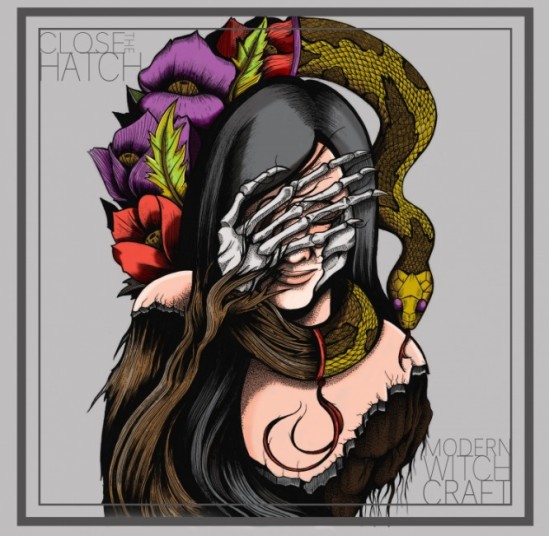 Good afternoon and happy Friday to all you wonderful people out there!

Day job insanity has really caught up with me this week; my apologies, but that’s why I missed out on writing anything here yesterday. Today isn’t much better — so I’ll have to make this quick — but I didn’t want another day to pass without sharing new music with you folks.

For your Memorial Day weekend perusal, here are a pair of albums that just came out today, from two bands residing on opposite ends of the country, but which are both at least somewhat doom-metal-adjacent. Hope you enjoy them!

END_OF_DOCUMENT_TOKEN_TO_BE_REPLACED 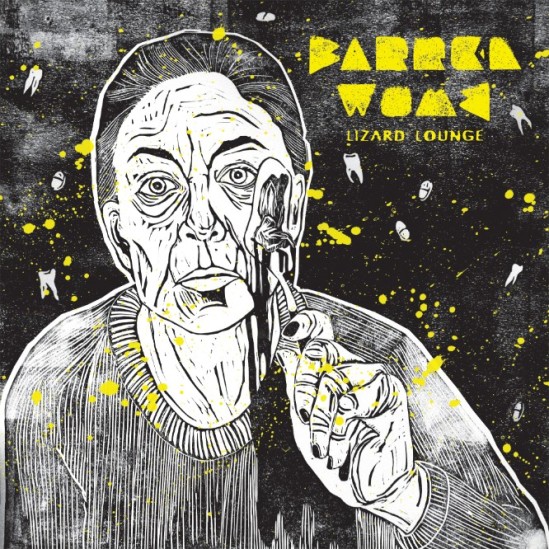 Hello, friends and casual acquaintences! Nice to see you all once again. And at this point we’ve successfully navigated our way through half of another week, which almost feels like cause for celebration, doesn’t it? These days, we kind of have to take what we can get.

Anyway. Obviously the reason you are here is because you are looking for more new music, and the reason I’m here is to share some with you. Several years ago in a larger article about several other albums, we had taken a quick glance at a split record between Grizzlor (from Connecticut) and Barren Womb (from Norway).

Right after that article was published, I became aware of a full-length album by the latter of those two, which had been released several months after the split. I enjoyed that record quite a bit, but as seems to happen far too often, somehow I never got around to writing about it and sort of lost track of the band.

But now — they’ve got another new record due out just two days from now, so it seems like a great opportunity to kill two birds off my to-do list with one stone, so to speak. Here we go!

END_OF_DOCUMENT_TOKEN_TO_BE_REPLACED

Good day, loyal readers. Hope you all are still doing well, trying your best to stay safe and sane.

Today I’ll be sharing something that very much falls outside the standard delineation of purpose for this website: not “metal,” nor “other heavy music,” and debatable whether this would even exactly qualify (under some of the more conservative definitions) as “music.”

Talking Book began nearly ten years ago when the owners of two record labels known for their diverse and eclectic international line-ups (Koolarrow Records‘ Billy Gould and Gigante Sound‘s Jared Blum) came together to collaborate on the album The Talking Book.

Somehow, that one must have escaped my attention when it was released back in 2011 — which is somewhat surprising, considering the fact that I literally signed up for Twitter in order to follow Mr. Gould back in like 2009 when rumors were running rampant about another of his musical projects possibly reuniting, and it was said that a certain bassist and founding member’s Twitter feed would be a reliable source of information about that.

Anyway, since at time the duo were joined by Gigante Sound co-conspirator Dominic Cramp, and many years later they finally got around to recording a follow-up — which Koolarrow released nearly three weeks ago.

END_OF_DOCUMENT_TOKEN_TO_BE_REPLACED 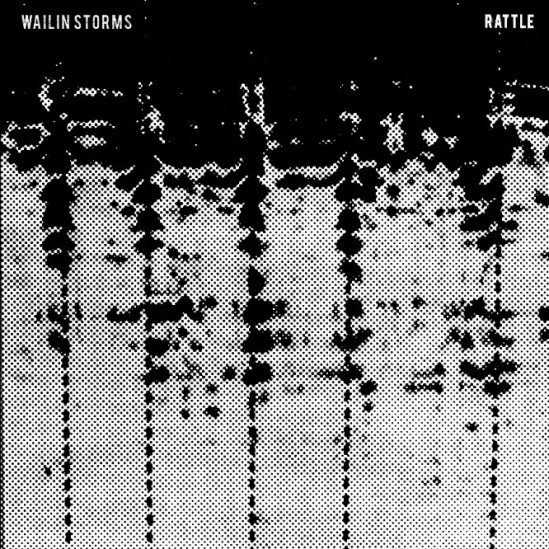 Good afternoon! In case you were wondering, I don’t ALWAYS write about stuff months (or even years) later; it just usually seems to work out that way. But sometimes I actually do get the chance to share something with you while it’s still brand new!

Today let’s check out one of each: a fantastic album by North Carolina’s Wailin Storms that I really dug quite a bit when it came to my attention half a decade ago (and has been sadly gathering dust in my gargantuan to-do list ever since) plus one that the band will be putting out later this week!

END_OF_DOCUMENT_TOKEN_TO_BE_REPLACED

Good afternoon! Hope everyone out there is doing their best to maintain a positive outlook on this gloomy mid-May Monday.

If not, perhaps it would help if you took a moment to listen to this album from earlier this year: you may remember Raphael Weinroth-Browne as the cello player who comprises one-third of Musk Ox and half of The Visit, both of whom we really enjoyed listening to when we had written about these groups’ previous output.

Well, Worlds Within is Mr. Weinroth-Browne‘s first solo full-length, and it nicely showcases the wide-ranging versatility his instrument (occasionally augmented by effects pedals) is capable of.

END_OF_DOCUMENT_TOKEN_TO_BE_REPLACED 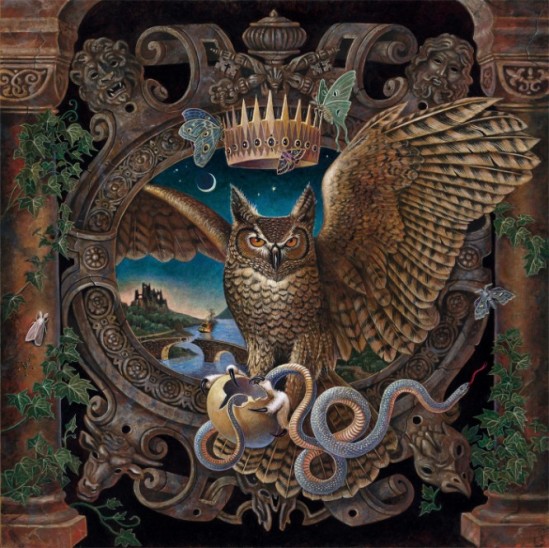 Well, seems like it’s about time to check in on what’s happening with our northern neighbors at Hypnotic Dirge. Here’s a new record they came out with within the past month — and if their history of quality releases wasn’t enough to recommend checking it out, surely that gorgeous artwork (produced by Benjamin A. Vierling) will draw you right in.

It turns out Hierophant Violent is the debut offering from a new ensemble from the San Francisco Bay area, consisting of members who’ve worked in various other local groups — such as Botanist, Lotus Thief, and Kayo Dot.