Hey! Remember last week when I told you about the new Kosher Komp compilation from Kosher Metal? The one that had a shit-ton of great songs on it, by a bunch of different bands, all for free? If not, go grab it now! Seriously. I’ll be waiting here when you get back.

Ok now, where were we… ton of great songs, bunch of different bands, right. One of those bands was the Inland Empire metal band Sangre, with their songs “The Great Tribulation” and “Forever I”. If you liked the blend of blackened prog-thrash presented in those two songs, then do I have some good news for you! 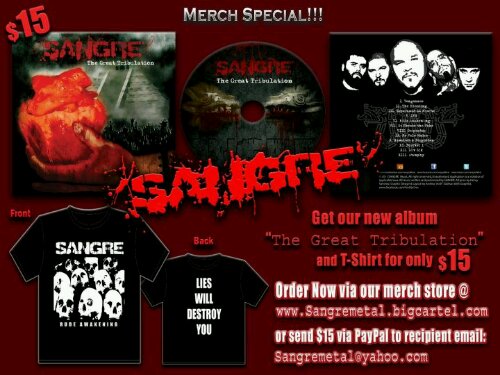 Recently, the band announced that they wanted as many people as possible to be given the opportunity to hear their music; to achieve this, yesterday morning they posted on Facebook that their entire 2011 album The Great Tribulation (which is where both of the songs featured on Kosher Komp came from) would be available to download for free from ReverbNation (one song at a time). Or, for those who prefer a physical CD copy of the album, that is ALSO available for free with purchase of a t-shirt from their online store.

I’ve already listened to the whole thing a few times, and this is pretty heavy stuff. Real thrashy throughout, but sometimes with black or death metal tendencies, other times displaying a bit of a progressive side, occasional clean vocals and acoustic bits, and the whole thing is liberally seasoned with some Latin flair. There isn’t a bad song in the bunch, but one of them in particular really stood out to me — and **UPDATE: I’ve embedded the video from the band’s official Youtube channel** below for you to hear it, just in case you still need more convincing that this is worth downloading.

“Me Vale Madre” (a Mexican colloquialism that roughly translates to “I Don’t Give a Fuck”) starts out with some of that great Spanish-flavored guitar, only to suddenly erupt into one hell of a barn-burner that’ll thrash your face to shreds. Later, though, the ethnic vibe gets reintroduced, turning into a sort of awesome salsa-metal hybrid — check it out…

**UPDATE 26 June 2012: It’s just been brought to my attention by vocalist Enrique (Henry) Sanchez that these guys now have another official video! This time it’s for the album’s title track “The Great Tribulation,” which is another one of the highlights from this disc. The video itself is basically just the band playing the song in a garage or somewhere, but it still looks (and sounds) pretty freakin’ awesome. The way the picture dissolves after the acoustic intro, just as the electric part is fading in, really seems to enhance that transition even more… check it out!