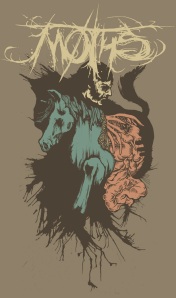 As a music blogwriter based in the Pittsburgh area, I feel like it’s my obligation to keep myself relatively informed in terms of what’s happening in the local scene, and then to spread this information to you, the loyal reader, whether you live near here or on the other side of the world. It’s a pretty big job, but I really do try to stay on top of things.

Sometimes I need a little bit of help, though. In one particular case, I had to discover a pretty amazing local band when their 2011 demo tape was featured on another (non-local) blog. That was The Number of the Blog, and I’d you link to the original post, but several months ago TNOTB went off to live on a farm somewhere with lots of land where it could run around with other blogs and be happy and free…

However, the band — Moths — is still alive and well; that two-track demo still features some excellent tech-metal drumming and guitarring as well as nicely-done death-metal vocalling, AND it’s still available for free download (stay tuned till the end of this post); and in fact, just yesterday they released a brand new song that you won’t want to miss…

Clocking in somewhere around the seven-minute mark, just like both songs on last year’s demo, “Horsebreaker” is a pretty formidible addition to the band’s catalogue. Almost entirely absent are the growly gutterals that graced the earlier material, to be mostly replaced by the nearly-hoarse hardcore-esque shouting that had formerly played a smaller supporting role. Admittedly, I was actually a little bit worried for most of the first minute into this new song: nowadays there is so much generic “dude half-shouting over top of real fast drumming and crazy guitar riffs that switch meter every few bars for no reason” music out there, and I just have a tough time getting into it; I was briefly afraid that this was going to turn out like that.

Those fears ended up being unfounded, though. Right after the first minute, a pretty cool guitar lead kicks in, and then another shortly afterward — things change direction often enough to stay engrossing, but not so frequently that it feels hyperactive and random. As a matter of fact, it seems like with each passing minute, the music gets more interesting…

Particularly when we come upon four minutes in — here, everything seems weighted down and stuck in slow motion, like the force of gravity just suddenly doubled. The tempo does pick up again, at least until about a minute from the end, where the band seems to turn in a much larger, more epic direction, for the rest of the way.

Check out the new song at Bandcamp (see the widget below — you can download it for free, or for whatever price you choose)… and start getting excited, because I hear there are plans for a limited-run cassette release as soon as next month… PLUS, as a sign of more good things to come, Moths are hoping to have a full-length album ready to go by this fall!

Also, if you haven’t gotten a copy of their Demo 2011 yet, here’s the free download for that one, as well:

One response to “Now Hear This: A Brand New Song by Moths (FREE Download!)”