Hey, Pittsburgh-area friends.  Here is your weekly digest of shows and events that are happening in town.  There are some good ones coming up over the next few days, so listen up.

As always, a reminder: I can only write about what I know about — so if you work for a local promotion company, a venue, or a band, please be sure to get in touch with me with anything you want to share. 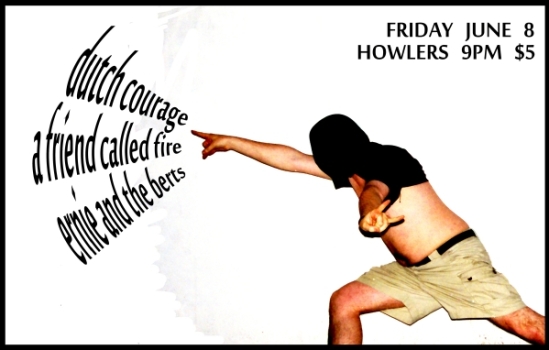 Dutch Courage, A Friend Called Fire, and Ernie and the Berts

Ernie and the Berts just put on a fantastic show on Tuesday night, but they’re heading out again tonight… I feel like I’m still recovering from being out so late in the middle of the week, but I guess the guys in the band are all ready to go! I haven’t heard either of the other two bands (yet) but there’s plenty more information to be found about this show at the EatB blog (here) or the Facebook event page (here)!

Sadgiqacea, Hive Lords, Invader, and Beneath the Remains

You may recall that we talked about Invader back when they released a CD back in March… Beneath the Remains are another great local band that we haven’t had occasion to discuss on this blog (yet, but I’m sure we will!). They’re being joined by two of our neighbors from across the state (Philadelphia), for what guarantees to be a very heavy Sunday evening!

Allure of the Earth Productions presents Dragged Into Sunlight

with Wolvhammer and Wrought Iron

Okay so this is Monday, and technically not part of the weekend, but this looks like a pretty brutal line-up of black metal, and I wanted to make sure to bring this to your attention early. Dragged into Sunlight (from the UK) and midwesterners Wolvhammer are becoming two of the biggest new names in black metal. Pittsburgh-based Wrought Iron have been described as “blackened grind”, and I’m embarrassed to admit this is the first I’ve heard of them. With a name like that, though, this definitely sounds like somebody that I need to start paying attention to!