Earlier this year, an anonymous, benevolent soul from Maryland (USA) proposed the launch of a new digital record label for charitable purposes. And hence, Food Desert Records was born. Named for the concept where more impoverished communities frequently lack easy access to affordable higher-quality, higher-nutrition foods, this new entity has set out to engage in activities that will raise awareness and generate mutual aid — not only for literal food deserts, but more broadly for any underprivileged or marginalized communities.

The label has cited their mission as “supporting charities that uplift and empower maligned communities,” further explaining that “Friends and allies are welcome; racists, fascists, homophobes, and transphobes are not. Together, through love and music, we will help to build a better world.” 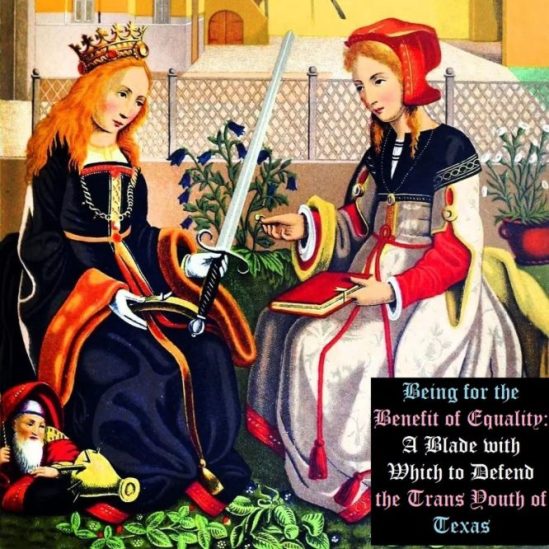 Various Artists – Being for the Benefit of Equality: A Blade with Which to Defend the Trans Youth of Texas (Food Desert Recordings, 04 July 2022)

This year on the fourth of July (Independence Day in the United States), the inaugural Food Desert release will be available. That date was chosen specifically in the hopes that “some degree of independence and freedom for the trans community in Texas” will be possible. The Being for the Benefit of Equality compilation will feature more than thirty songs, graciously donated by each participating artist so that the full proceeds from sales may go to Equality Texas.

In February 2022, Texas Governor Gr*g Ab**tt signed an executive directive ordering the Texas Department of Family and Protective Services to conduct child abuse investigations of parents who give medically-necessary gender-affirming care to their transgender children. This was the first in what has become a wave of anti-transgender laws passed by a multitude of southern states. The transgender community is among the most maligned communities in the United States of America, and many have been living in fear their entire lives. The increased attacks against the transgender community certainly hasn’t helped.

That’s where Equality Texas comes in. Equality Texas works to secure full equality for lesbian, gay, bisexual, transgender, and queer Texans through political action, education, community organizing, and collaboration. They envision a Texas where lesbian, gay, bisexual, transgender, and queer Texans and their families have full equality in the hearts and minds of our fellow Texans and in all areas of the law. And they need our help more than ever.

All proceeds from this album will be donated to Equality Texas every month to help them achieve their mission. Please visit www.equalitytexas.org to learn more about their organization and what they are doing for the transgender community of Texas.

Furthermore, Food Desert has decided to launch the pre-order of this compilation TODAY (17 June 2022) to coincide with Bandcamp’s official Juneteenth fundraiser. So today only, the percentage of sales that would normally be collected by Bandcamp will instead be donated to the NAACP Legal Defense Fund. For more information on this fundraising effort (which applies to all sales on their website today from midnight to midnight, Pacific time zone), please see this feature on Bandcamp Daily.

Being for the Benefit of Equality: A Blade with Which to Defend the Trans Youth of Texas is available for pre-order right now, right here.

Featured artists will include: