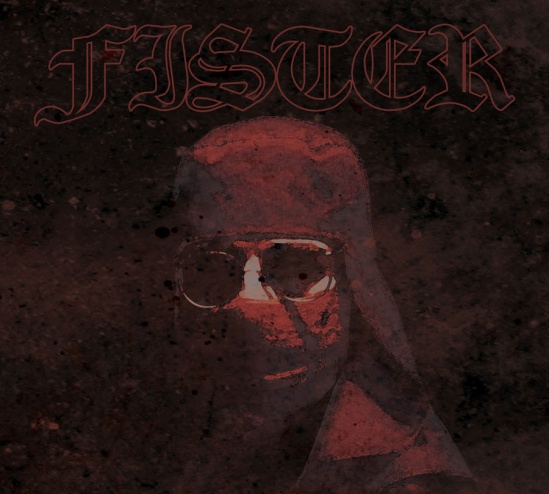 Lately, a close personal friend of this website, Mr. Jason Cantu (read more about him here, as part of my wife’s ongoing interview series), has been all atwitter about this sludge/doom band from Saint Louis called Fister. Now, I’ve always had a lot of respect for his judgement about things, because anytime he’s recommended something it’s always been a winner: he seems to really pay attention to what people listen to, and so if he says “You’ll like this,” chances are you will.

But you don’t just have to take my word for it. Jason’s opinions have just gained a whole new level of credibility, as he has recently joined the ranks of The Sludgelord as a contributing writer. So you know that’s no B.S., since that site is world-renowned as a leading authority on heavy music.

So anyway, Fister. The first time I heard of these guys was last year, when one of their songs was included on the Doommantia benefit comp. That song was very slow and heavy, raw and noisy. All things that I would later discover to be part of this band’s signature style.

Fast forward to the present day; Fister are currently in the midst of an excursion across the Midwest and the northeast, which includes a stop in Pittsburgh tonight! All the members of Cantu‘s band Slaves BC have been talking about how excited they are to be part of this show, so I figured it was about time for me to do some investigating.

As it turns out, Fister has quite a lot of material available on their Bandcamp page, so I decided to tackle their most recent album, Gemini (released earlier this year), which is their second full-length. Here’s what I discovered…

“If it’s too slow, you’re too young” — the band has used this as a tagline, and occasionally as part of their logo, but in a more general sense it seems to be their overall philosophy. I don’t know if it’s a law of nature or something, but it does seem to be a frequent occurrence that once people start to mature a bit, they realize there’s much more feelings to be felt by actually taking the time to stop and feel them, instead of treating everything like a race or a competition to see who can fit the most notes per second or whatever. This is especially true when those particular feelings are “gut-wrenchingly heavy” — the music definitely needs some space in order to develop that level of intensity.

Well, Fister certainly allows it to do just that: while I haven’t actually analyzed all these songs in great detail, after a few listens I’d estimate that there isn’t a tempo anywhere that’s greater than about 70 BPM (that’s “beats per minute” for you non-music nerds out there; in other words, just slightly faster than one beat per second). There was a point right around the middle of the second-to-last song (“Permanent Chemical Psychosis”) where it speeds up a little bit, but not very much. So basically, if you’re looking for slow and heavy-as-fuck, here you go.

First song “Antitheist” introduces the album with almost more feedback and amp noise in the spaces between notes than it has actual notes. This really sets the tone for what follows, as the rest of the songs tend to be similarly raw and abrasive. The vocals match the music well: harsh and raspy, highly distorted with a tinge of blackness around the edges. This is like Wizard Smoke on barbiturates.

Throughout this forty-seven minute opus, the only real stylistic departure comes in the title track, right in the center of these seven songs. With a minimalistic instrumentation primarily consisting of piano and double bass, and constructed in waltz time, the song nevertheless follows the same dirge-like tempo as the remainder of the album. Between the slowness, and the fact that the song is also punctuated by the same heavy guitars and harsh vocals that are so pervasive elsewhere on the record, I don’t imagine many people finding “Gemini” to be conducive to dancing.

You can hear the full album via Bandcamp, and grab a download of it if you wish.

The band’s Bigcartel store is currently undergoing some renovations (it appears), but hopefully physical albums will be available from them directly at tonight’s show (or any of their other tour dates, including Thursday in Columbus and Friday in Cincinnati).

As an added bonus… while I was doing research for this review, I discovered that a couple years ago, Fister had released a split record called And Their Masters Bled for Days with their fellow Saint Louisans, death-doom band The Lion’s Daughter — who coincidentally are also taking part in this current tour! You can listen to both sides of that record via the following Bandcamp widgets, and bringing this discussion nearly full-circle, you can also read more about the split (and find where to download it for free) over at The Sludgelord.

The Lion’s Daughter side:

Fister with The Lion’s Daughter, Slaves BC, and Bear Skull