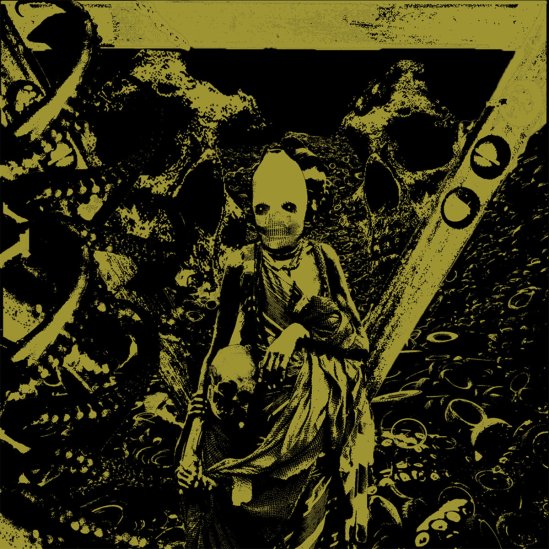 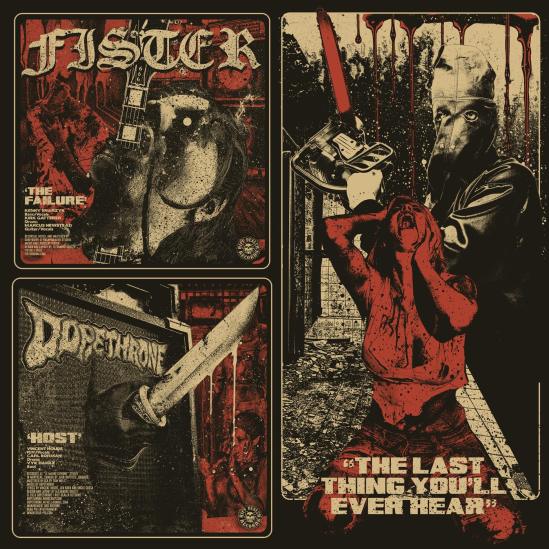 It’s Monday and I’m tired and crabby and I don’t really want to be here and I just want to punch everything and everyone right in the damn face. It probably wouldn’t be advisable to do so, because there’s a good chance I’d end up losing my job — and despite what you might think based on how much bitching and complaining I do, that would probably not be a good thing. So as per usual, I’m stuck keeping all that annoyance and rage bottled up inside, with no real outlet through which to channel it. The best I can do is try to calm my nerves by grabbing a pair of headphones and blocking the whole world out with something loud and angry and particularly ugly. In fact, looking ahead at the schedule for the rest of this week, #SpoilerAlert, there’s going to be a lot of angry and ugly going on. So stay tuned for that.

To start off the week, we’re going to visit with St. Louis ultra-doom trio Fister. It’s been nearly three years since I wrote about their Gemini album on the day they were coming here to Pittsburgh with their friends and neighbors The Lion’s Daughter. At that time I had mentioned that there was quite a bit of stuff in the Fister discography, including a split record with The Lion’s Daughter, and that I had chosen to listen to Gemini (and share it with you folks) simply because it had been their most recent release at the time. Well those guys have continued to be pretty active since then, both touring and recording, and I figured it’s about time we checked back with them.

In particular, I thought we could take some time to check out a couple more records that have come out over the past two months. (There’s much more out there on Bandcamp, if you’re curious, but for practical reasons I had to limit myself to two releases to discuss today.) The first will be a split 7″ with Teeth from California, and the other is a split with Dopethrone from Montréal. 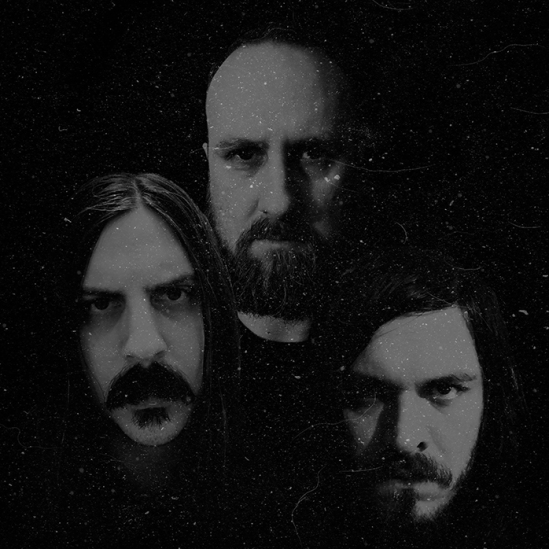 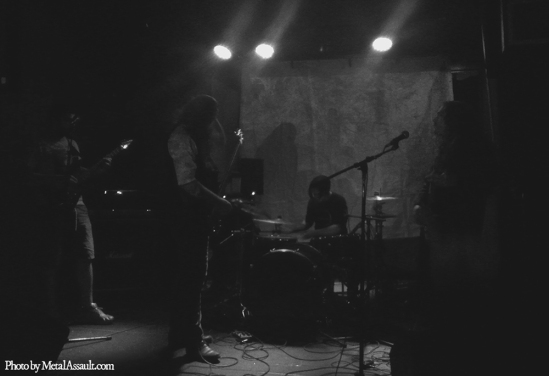 On the first split, Fister provides one song, a six-and-a-half-minute anthem to optimism titled “We All Die Tonight,” while the Teeth side contains two tracks totalling approximately the same length.

Side “A” fades in with loads of feedback; the track — like all of Fister‘s material — is incredibly heavy, deep, and slow. The mix is bass-heavy, featuring unadorned and sloooow unison riffs, with tortured vocals occurring more or less in unison with the riffs.

Gradually the arrangement increases somewhat in complexity — the drums and guitars both add in extra subdivisions to their notes to seemingly increase the perceived tempo. About halfway in, an unexpected twist enters: a single iteration of a clean, mellow strummed guitar part with plaintive-sounding bass in the background. Just as quickly, though, the distortion kicks back in and the drums return, during a sort of wistful guitar solo, before the vocals and the main riff from earlier both return to bring the track to its devastating conclusion.

The other two songs on this split, “Lament of the Spineless” and “To Lay Upon Blistered Thorns,” are a bit more varied, tempowise. While they do contain sections filled with heavy sludge and despair, some slower elements creating an atmosphere of darkness, we also find a fair amount of blastbeats and grinding bass interspersed throughout; fast-paced segments that propel forward with a great sense of urgency. Taken in combination with the thick, heavy sludge that accompanies it, the overall effect can sometimes seem almost overwhelming to listen to. 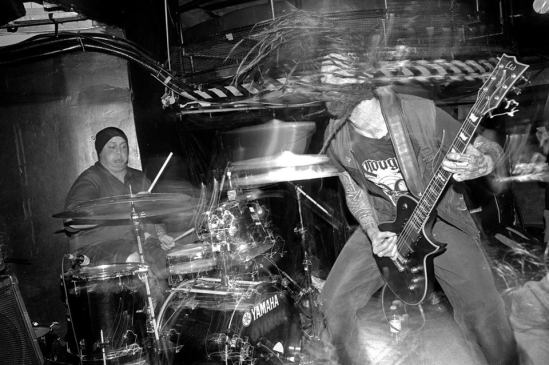 Searching through the archives here, I was surprised to note that I’ve never written about Dopethrone before, since I’ve enjoyed each of their first few albums. When they aren’t ruining Bill Withers songs, that is — no offense toward the band or anything, they clearly have their own distinctive sound and I definitely feel that it could work to put any number of cover songs into that style, but “Ain’t No Sunshine” (which they tackle on their Dark Foil album) was pretty damn near a perfect song in every way, from the vocals to the minimalistic arrangement, and is just one of those songs that nobody should ever try to recreate, no matter who they are. Anyway, despite the lack of coverage that band may have received on this site, they were certainly praised often enough at the altar of the (now, sadly, apparently deconsecrated) Church of the Riff website, if you care to poke around a little bit and check out more of their earlier work.

Back to the subject at hand, this new split features a single song by each band. Fister‘s contribution “The Failure” has some vocals that aren’t quite so deep as they were last time around (and especially not so much as the Teeth tracks), employing more screeching and howling. While the song starts out with sort of medium-slow guitars and drums, almost two minutes in, it slows down significantly and adds HUGE HUGE amounts of reverb and atmosphere. Especially in the vocals, reminding me a bit of Hivelords. Which is never a bad thing to be reminded of. The ending here is drawn-out, filled with long, tortuous howls and gut-punching unison stabs of bass/drums/guitar.

“Host” by Dopethrone starts off with a bit of a drum groove, and a rather brutal quote — “A dying race ruled by a dying emperor, imprisoned within themselves in a dying land” — sampled from the narrator of the surrealist-fantasy classic The Dark Crystal. Following that, the band’s characteristic heavy death-fuzz and acidic snarled vocals take over (which, on reflection, are coincidentally not too far off from the voices of the Skeksis, the scary lizard-bird things in the movie).

The Fister / Teeth split can be previewed using the Broken Limbs Bandcamp player below, and you can buy a copy of it here. The Fister / Dopethrone split is available to download for free from Riff Dealer here, or you can also grab it directly through either of the bands’ Bandcamp widgets below.