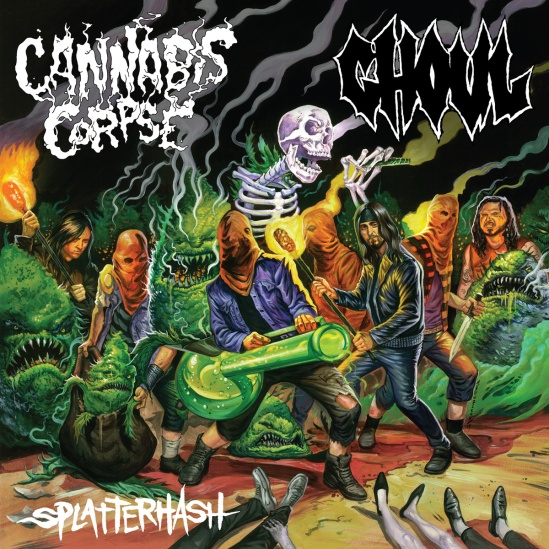 First, a pair of Tankcrimes alumni are featured on the cleverly-titled Splatterhash (which incorporates the title of Ghoul‘s 2006 album Splatterthrash — which also happens to be that band’s self-described genre name — with Cannabis Corpse‘s typical modus operandi of parodying other bands’ titles by changing them to marijuana references).

Fronted by Municipal Waste bassist Landphil Hall, Cannabis Corpse has been churning out weed-obsessed death metal for years. While their penchant for novelty-style parody song and album titles sometimes keeps folks from taking the band seriously, those who do give them a chance quickly learn that they excel at their adopted style (a loving tribute to the Floridian masters of the genre). Following their most recent full-length Beneath Grow Lights Thou Shalt Rise, which saw the band tackle songs based on Morbid Angel and Deicide titles, the new material contributed to Splatterhash indicates a return to paying tribute to the band’s namesake (and the source of their first few albums’ worth of titles).

Specifically, the two tracks (“The Inhalation Plague” and “Shatter Their Bongs”) derive their titles from Cannibal Corpse‘s 2009 album Evisceration Plague (the title track and “Shatter Their Bones”, respectively). While I don’t claim to be an expert on the discographies of either band, I believe this represents the latest Cannibal Corpe material ever used as inspiration by Cannabis Corpse, as well as the latter band’s first foray into titles from the former’s Corpsegrinder era. In any case, while both songs are very different from their namesake tracks — different riffs and structure, and (obviously) different lyrical content — as always, Cannabis Corpse do an excellent job at emulating the overall style, once again rewarding those listeners who manage to overlook the gimmickry with some high-quality death metal.

Very little is known by the general public about the masked madmen of Ghoul; they never seem inclined to share any personal information beyond their pseudonyms and the claim that they originate from a place called Creepsylvania. However, with their true identities hidden, that obliges us to instead focus on the music itself. Their side of Splatterhash also features two songs, ranging from the five-minute-plus “Inner Sanctum” to the under-two-minute “Spill Your Guts” (bringing the record to a total length somewhere around fifteen minutes).

Vocally, these feature a harsh, blackened-death style, while the music tends to hover somewhere in the middle of crossover and death-thrash, with the occasional nearly surf-style guitar lead thrown on top for good measure. While this particular blend of styles is a bit of a contrast with the songs on the flip side, the tracks here are rather enjoyable, and it wouldn’t be difficult to imagine that fans of either of these bands would probably also appreciate the other. The split is currently streaming at Bandcamp (see below); you may also purchase a download, CD (here), or 12″ vinyl (here; available in either silver/black or black/swamp green).

Exhumed is a band I’ve long considered an important part of my appreciation for the more extreme varieties of metal. Back in my early twenties, right around the demise of Napster, I had been starting to explore various genres that I hadn’t really had much exposure to previously. I just happened to stumble upon Relapse Records‘ Contaminated series of CD samplers, which got me hooked on a wide range of artists, including this particular Californian goregrind entity with tracks from their 1998 and 2000 albums (Gore Metal and Slaughtercult, respectively).

Anyway, here we are, well over a decade later, and Exhumed have contributed a quartet of tracks to our second split record. (By the way, despite having twice as many songs as Splatterhash, this one actually runs a little bit shorter overall, clocking in closer to twelve minutes.) I find it encouraging that the band has continued to stick with their trademark style, unlike certain of their peers who’ve made unfortunate transitions in more of a melodic direction. On the two new songs here, all the classic elements I loved all those years ago — the dueling growl/shout vocals, the breakneck paced songs, the top-notch guitar solos with more whammy bar divebombs than Kerry King‘s — are still present, and sound as good as ever. In addition, they throw in a couple of covers, giving the grindcore treatment to Minor Threat and Negative Approach, thereby paying homage to the hardcore/punk element that originally served as much of an influence to grind as thrash and death metal did.

If Exhumed represent a band with their toes just across the metal side of a punk/metal hybrid genre, Iron Reagan could probably be considered the opposite: their crossover nature clearly has plenty of influence from thrash as well as punk, but their performance style tends to lean ever-so-slightly more in a hardcore direction. Of course, the metal cred runs high with these guys too (Landphil happens to be a part of this band as well, with vocals by his Municipal Waste, mate Tony Foresta, as well as members of Darkest Hour, A.N.S., and a whole laundry list of others).

All four songs here are really well-done examples of classic socially-aware, angry tirades against various corrupt establishments and other societal ills. My favorite part, though, has to be the song title “Gave Up on Giving a Fuck”. Just like the previous record we discussed, I totally expect that there’s enough similarity between these bands to appeal to fans of either one, but also enough of a difference to keep things interesting for everyone.

The split can be streamed at Bandcamp (see below), or it’s also available on 12″ vinyl (here; in white or black/red).