Hey, guys and gals! Remember Fatality? I first introduced you to this cool Canadian thrash band last summer when they were holding a contest, but at the same time I wrote a few words about their 2011 T.F.E.S. EP. That three-song release is still available to download for free (I’ll toss the Bandcamp widget at the bottom of this post), and the title track (“Thrash Fuck Eat Sleep”) is still one of the catchiest pieces of thrash metal I’ve heard in ages.

Anyway, the guys have a brand new album out now — they released Psychonaut two months ago, and since then they’ve been jaunting all across the United States and Canada on what they’re calling the “Towards Disastour”. (It’s a play on words, because there’s a song on the new record called “Towards Disaster”. Funny, right? These guys are just full of hilarity — just check out vocalist Spencer Le Von‘s ongoing tour blog over at Dead Rhetoric, or his series of Backseat Podcasts, or the band’s blog which he occasionally updates “with fervent apathy”. Seriously, check that shit out.)

The Towards Disastour tour is coming to a close tonight — Wednesday 28 August 2013 — with a stop in Pittsburgh, PA. Readers who live nearby are highly encouraged to come on out to Howlers in Bloomfield tonight. The show will also feature local thrash/traditional heavy metal greats Vermithrax and the NWOBHM-flavored Lady Beast (see full details about the show here). If you need more convincing than that (or if you live somewhere far away and won’t be able to go see the band in person tonight), keep on reading and I’ll tell you a little more about the new album Psychonaut. 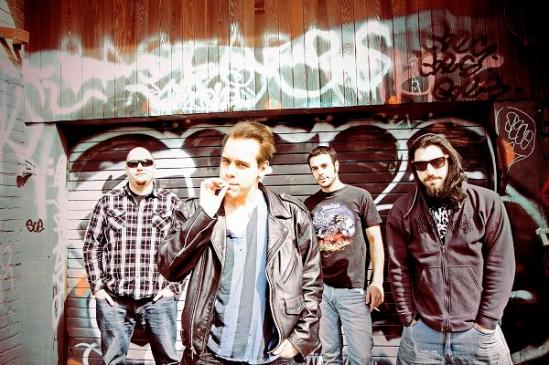 When I wrote about this band before, I drew a number of comparisons to several legendary thrash bands. I’d still say all of that is accurate — Spencer‘s voice is as unique and distinctive as an Araya or Mustaine, spending most of the time shouting, or sometimes singing but without a whole lot of regard to melody. Backing vocals, especially on shout-along choruses, still bring to mind folks like Exodus. Despite all the silliness that seems to be inherent in their communication with its fans, though, the music on Psychonaut shows that they can also take things serious, even verging on dark at times.

The eight songs on this album generally span between the thrash and speed metal genres — an overall sound not unlike what you might hear on Kill ’em All, for example. But other influences also pop up from time to time. In the title track, there are some nearly southern rock-sounding moments — especially the guitar solo which is full of slides and bends that sound lifted directly from Molly Hatchet.

One of the highlights of the band’s sound, in my opinion, is the bass parts — fortunately they stand out nicely in most of the songs (without getting lost behind the twin guitars, as is frequently the case with a lot of modern music), because they tend to add very interesting textures, in a very Ellefson-esque kind of way. Although one of my favorite parts on this whole album is a bass riff that happens almost a minute into the song “Thoughts Collide”, which totally brings to mind one of Billy Gould‘s best moments (see: midway through “Cuckoo for Caca” on the King for a Day album).

In short, anyone who is a fan of old-school (like, early-to-mid 80s) thrash and speed metal, who wants to hear fresh and new songs being crafted in a similar style, but while bringing enough to the table to keep it interesting — not just recycling and rehashing the same old stuff you’ve heard a thousand times — should really check out Fatality. And anyone who missed out on the first wave of these genres, but who perhaps may just be discovering it now via modern thrashers like Ramming Speed, here is another up-and-coming band for you to check out, who could nicely serve as a bridge for you to go on and discover some classic material.

You can sample Psychonaut here on Bandcamp (two of the tracks are available for your listening pleasure), and the album is also available there on CD.