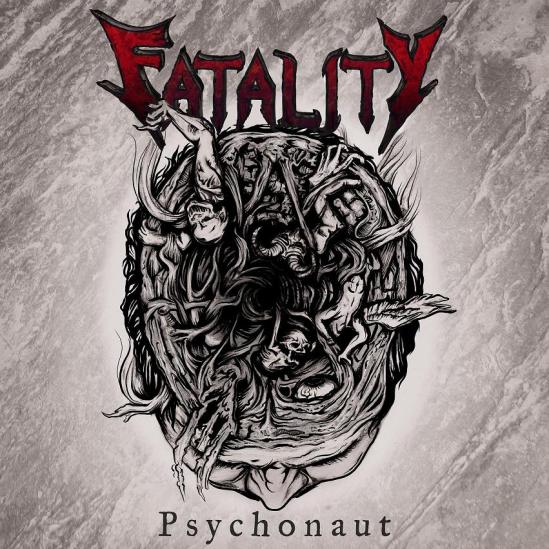 Hey, guys and gals! Remember Fatality? I first introduced you to this cool Canadian thrash band last summer when they were holding a contest, but at the same time I wrote a few words about their 2011 T.F.E.S. EP. That three-song release is still available to download for free (I’ll toss the Bandcamp widget at the bottom of this post), and the title track (“Thrash Fuck Eat Sleep”) is still one of the catchiest pieces of thrash metal I’ve heard in ages.

Anyway, the guys have a brand new album out now — they released Psychonaut two months ago, and since then they’ve been jaunting all across the United States and Canada on what they’re calling the “Towards Disastour”. (It’s a play on words, because there’s a song on the new record called “Towards Disaster”. Funny, right? These guys are just full of hilarity — just check out vocalist Spencer Le Von‘s ongoing tour blog over at Dead Rhetoric, or his series of Backseat Podcasts, or the band’s blog which he occasionally updates “with fervent apathy”. Seriously, check that shit out.)

The Towards Disastour tour is coming to a close tonight — Wednesday 28 August 2013 — with a stop in Pittsburgh, PA. Readers who live nearby are highly encouraged to come on out to Howlers in Bloomfield tonight. The show will also feature local thrash/traditional heavy metal greats Vermithrax and the NWOBHM-flavored Lady Beast (see full details about the show here). If you need more convincing than that (or if you live somewhere far away and won’t be able to go see the band in person tonight), keep on reading and I’ll tell you a little more about the new album Psychonaut.

END_OF_DOCUMENT_TOKEN_TO_BE_REPLACED

You may have noticed that I don’t normally publish album reviews before the official release dates. Part of the reason might be because I want to share things with you when they’re actually available for you to get your hands on them, because I know how short people’s attention spans can be sometimes — myself included! Sometimes when I read about something several months before it comes out, I might think to myself, “Oh that sounds great, I’ll have to check that out” and then I completely forget about it a few days later.

More than that, though, it’s mostly because I usually just don’t get around to it. I hear about loads of great music and I want to write about all of it, because I want to make sure the bands get the exposure they deserve, and I want to make sure YOU have every opportunity to hear about the new music you want. Besides that, I try to spend as much time as possible with something before I start writing — albums usually get numerous listens on several different days, so that I feel familiar enough with the material to be able to describe it adequately AND so that I can be sure I wasn’t hearing something wrong just because I was grumpy or preoccupied on a particular day.

Unfortunately, I don’t have an unlimited amount of time for writing, which means I’m perpetually running behind. I’ve still got a bunch of albums from 2011 I haven’t even listened to yet, not to mention how much stuff I haven’t had the chance to write about!

When I heard this album full of killer thrash music by Vancouver’s Titans Eve, I knew I would want to write about it and share it with you, but then when I found out that they have pre-order packages (either the digital or CD versions) where they are throwing in a FREE t-shirt, I decided I needed to bring this to your attention sooner rather than later! This Friday (the 13th of July) is the official release date, so hurry up and finish reading, then at the end of this post you’ll get the chance to hear the album for yourself, and I’ll give you all the links you need to take advantage of this special pre-order deal.

For my Canadian friends, I’ve also provided the dates for the band’s July/August tour of western Canada with Anvil, as well as a list of stops when they will be heading east across the rest of the country with Kill Devil Hill.