Happy Friday, readers! Just a few more hours left ’til quitting time, which means no more work until next week… You have no idea how nice it feels to say that. I think I’ll say it again: HAPPY FRIDAY!!

It has turned out to be kind of a dreary day, and of course it’s made all the more dreary simply from being at work. Feels like it’s about time for something to lighten the mood a bit, and I’ve found something perfect for that! If you’re as big of a Monty Python fan as I am, or if you’re as big of a thrash metal fan, or especially, if you’re heavily into both, you’ll definitely want to pay attention to this…

One of the most famous Monty Python’s Flying Circus segments of all time was the wildly popular “Ministry of Silly Walks” sketch. It seems this is exactly what came to mind when guitarists Spencer Le Von and Eytan Gordon of Canadian thrash quartet Fatality were really bored one night and tried to think of a way to amuse themselves. As Spencer (who is also the band’s vocalist, and writer of the band’s official blog) wrote in a blog post earlier this month:

…It took a while for me to realize how astonishingly important killing time is as a musician. It is a vital component of what we do. Whether it is mind bending travel time to a gig or waiting to perform, metal musicians have killing time down to a delicate science, and a band that laughs together stays together.

To better illustrate this point we have devised a CONTEST based on our latest “weekly challenge” video. The video involves Eytan and I acting like complete assholes in public, because that is what makes us laugh and that’s what we find funny.

For this video we decided to pay tribute to Monty Python and the Ministry of Silly Walks. In this clip you can see me and Eytan going for a swift jaunt in our local Metro to purchase some late night munchies.

For their contest, the band want you to take a video of the silliest walk you can come up with, and then submit the video to their Facebook page.

The person who submits the silliest video (as judged by the band themselves) will win a cool prize pack including the following:

This contest was first announced about two weeks ago — there was an update on the band’s Facebook page earlier this week stating that they’re still looking for submissions, but I haven’t heard any official word about a deadline. It seems like the contest is pretty informal, but you won’t want to miss out on these great prizes so you’d better get stepping… as silly as you can!

Oh, and just in case you aren’t already familiar with Fatality’s material, and you want to get a better idea of what you’d be winning, I’ve got some stuff here for you to hear — including several tracks you can download for FREE… 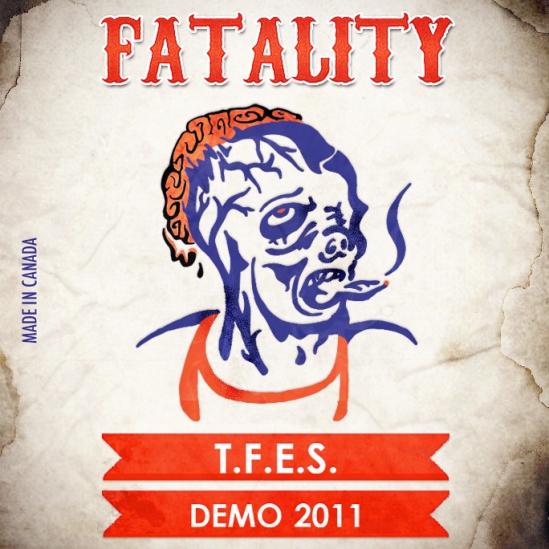 Fatality has been kicking around the Toronto area since sometime prior to the summer of 2008 (that’s the earliest time mentioned in their official bio anyway, when the band (Le Von, Gordon, and bassist Adam Zlotnik) hooked up with drummer Andrew Suarez). They later self-released a full-length album called Beers from the Grave near the end of 2009, which you can now purchase on CD or as a digital download from Bandcamp. Of course, you can also stream it from there, and if you only like half of the album you’re definitely in luck, because four out of the eight tracks are also available to download for free!

Anyway, after generating a bunch of buzz all over the metal press, the band followed this with a three-song demo last April, which can also be downloaded for free. These three songs — “Thrash Fuck Eat Sleep,” “Uppercut,” and “Hammerfist” — showcase the band’s ability to pay homage to the classic thrash bands of the 80s and early 90s (the twin-guitar assault often sounds like a fairly accurate Hanneman/King impersonation; the song structures and vocal delivery tend to bring to mind the story-telling styles of Suicidal Tendencies or Megadeth‘s “Sweating Bullets”; the choruses follow in the grand tradition of shout-along anthems by Anthrax or Exodus), while still sounding modern and relevant (each song sounds crisp and clean, with the drums and bass in particular standing out very audibly in the mix; they have achieved a very “heavy” sound without ever coming across as muddy).

You can listen to this demo, or download it, using the following Bandcamp widget:

About a year after this was released, the band announced a line-up change: on drums they have now reintroduced Spencer’s brother Mason Le Von, who was one of the original founding members.

Also, it seems, they have been working on some new material lately, which we will hopefully learn some more details about soon! In the meantime, they did put together a video preview of one new song, “Monstrous,” which can be viewed at Pure Grain Audio!