The Matador – Descent into the Maelstrom (Serotonin Productions, 21 April 2011). 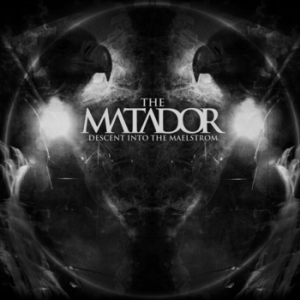 “It raged with such noise and impetuosity that the very stones of the houses on the coast fell to the ground.“

Much like the short story of the same name, these progressive-post-doom-metal Queenslanders’ EP takes the listener on a voyage that explores unknown depths of madness.  Also like the Poe narrative, there is no telling where the experience will end up, but what is certain is that you will not emerge from the other side unscathed or unchanged.

This review is somewhat atypical, in that I will be describing each of the songs in detail, rather than just giving some overall impressions of the entire album.  Ordinarily I wouldn’t do this, but for one thing, there are only five songs on this release; also, the passage of time through the tracks seems to represent a progression – an aural journey that represents the titular descent – and it felt like this was the best way to do justice to the material.

Keep reading to join me on this voyage, and along the way you’ll come across links where you can listen to and/or download a couple of the tracks…

“I. Kingdom of Glass”

We open with a little bit of intertwining riffs on the guitars and bass, dancing about but giving little away as far as the direction this journey may take us.  At this point, we could be witnessing an interlude from Tool‘s Lateralis, or possibly the intro to a Dysrhythmia song.  Then, suddenly, the drums enter, thunderous and echoing as though they were recorded in a massive chamber — and strangely reminiscent of the drums that lead into “Enter Sandman”, perhaps a form of foreshadowing as to the nightmare that could lay in wait.  Everything settles into a groove for a short time, with a bouncing, walking bassline that again has me thinking of Dysrhythmia or any of a series of similar instrumental experimental artists.  Then a huge wall of guitars drops on top of everything; an enormous crushing weight that utterly fills the ears with distortion and overdrive, feeling simultaneously opressive but also enveloping, like some of the heaviest moments of those great old shoegaze bands of the 1990’s.  Everything drops out except for a very minimal plinking on the guitar, which once again brings to mind Adam Jones of Tool.

Then out of nowhere, it all comes back – the thunderous drums, the crushing guitars, and the bouncing bass in between it all, but also (four minutes in, now) the vocals enter.  Rather than being lost amidst the weight of the wall of sound, the vocals push through as though the metaphoric wall were constructed of metaphoric newspaper rather than metaphoric bricks.  What we have here is an anguished cross between a yell and a howl, sounds that convey the feeling one might expect to find in a torture chamber, or the pits of hell, or possibly on a Rwake record.  The CD does not include lyrics, but at this point actual words themselves would be meaningless to convey the sense of pain and dispair that comes from the tone of voice here.

The second stage of the descent begins pretty much where the first left off: heavy, grinding guitars, pounding drums, and tortured shouting/singing.  Incorporated here is also a bit of atmosphere provided by wavery, echoey guitar sounds that soon take over as the rest of the music falls away.  In its place, we are now joined by soft voices, sounding tormented in a completely different way: ghostly, ethereal singing that could be coming from the choir of a church of the damned.  At the same time, in a strange way, the minor-key harmonies and haunting, wordless singing almost resembles the middle section of Chicago’s “Wishing You Were Here.”

The main vocals return, accompanied by a pummeling guitar assault, but now the shouting sounds less anguished than simply pissed-off, in the style of a Kirk Windstein (Crowbar) or Tad Doyle (Tad).  And as suddenly as the rage kicked in, even more abruptly everything goes silent.

The jarring end of the last track leads into a quiet, shuffling drum groove with a bit of echoey guitar dangling overhead, all of which would not have sounded out of place on one of Radiohead‘s earlier records — before they went all electronic and weird.  After a brief crescendo, the intensity suddenly skyrockets as the vocals enter; here they have abandoned the shouting in favor of what could better be described as screaming or shrieking.  This is not the mere expression of physical pain, but anguished cries that could only be the result of unbearable torment deep in one’s soul.  While the lead vocal part is still being expressed lyrically, it is surrounded (in the stereo spectrum) by backing vocals that are simply screams that are beyond the usage of words.

A brief reprieve comes in the form of a return to the song’s intro, here capped with some more ethereal choir-singing, only to give way once again to the pained shrieking through the end of the song, which this time seem even more anguished than before (as impossible as it may seem).

“IV. The Woman Clothed in the Sun with the Moon Under Her Feet”

Here again, we are lulled into a cautious feeling of calmness by the interplay of guitar and bass, with a bit of clean singing (that brings to mind Radiohead again, or maybe Sunny Day Real Estate‘s softer moments), and partially obscured by a reedy, moaning sustained tone that could perhaps be produced by an e-Bow(?).  Some subtle changes to the dynamics and the drum part keep the listener on edge, knowing that any moment the floor could drop away, and with it any tentative sense of security brought on by the slightly warmer sounds now being experienced.

Predictably, this is precisely what happens.  On top of driving, churning guitars and a furious drum part full of fills, comes the voice of a being whose soul has been ripped in half by demons.  As we go on, this feeling just grows stronger as more layers are piled on, including all the parts from earlier in the song, which no longer have any soothing effects whatsoever.

Opening with a rather tremoloey guitar that has a tone very similar to the beginning of Audioslave‘s “Like a Stone,” and with drums that would not have sounded out of place on that same album, this song doesn’t take very long to throw the intensity switch, bringing the heavy guitars and the now-familiar shrieky/screamy vocals.  Quickly moving back to the clean singing and sustained tones of the prior track’s beginning, it finally feels like we have reached the end of our journey at the lowest possible depth in the pits of despair, and looking around us, we see that perhaps it is not quite as terrible as we had feared.  Gently, the singing and music fade out, leaving a feeling of serenity and acceptance.

Of course, by now, we have experienced enough suffering and pain to be ever-wary and cognizant that such peaceful calmness is often both illusory and fleeting.  After a few seconds of silence, an all-out sonic war is launched upon the listener’s ears, bringing a final assault of anguish and brutality.  This attack is very succinct, lasting just long enough to ensure the impression it leaves will be a permanent one.  Then, at last, it all fades back to nothingness again.

Follow the links contained in the widgets above to listen to (or download) tracks 2 and 5 for free.

The band is currently in the process of recording a follow-up album, tentatively planned to be released in early 2012.