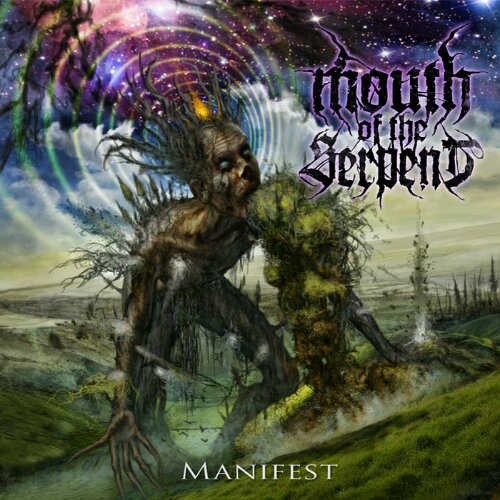 Mouth of the Serpent – Manifest (10 January 2012, Swimming with Sharks Records)

Good afternoon, Valley of Steel reader.  Or depending on where you live (or when you come across this post), good morning or good evening. If whatever time of day it happens to be is perhaps not so good for you, just bear with me, it’ll get better.  I’m going to introduce some more music to you, and I’ve got a feeling pretty soon everything will be just fine.

For starters, just look at that cover art up there!  Now that’s some cool shit, huh?  It was created by Tony Koehl, who has been responsible for quite a few other album covers (check out this gallery), probably the most high-profile of which was Black Dahlia Murder‘s 2009 album Deflorate (as seen here).

Anyway, back to this present work of art.  People say you shouldn’t judge what’s inside
a book or album or whatever, just based on the cover.  Good advice, but not very practical in real life — after all, isn’t that why there is a cover in the first place?  To give you an idea what you will expect from the contents, and to get you started in your decision whether you think you will like it or not?

Well in this case, the artwork definitely catches your eye, and that odd juxtaposition of themes could possibly confuse the viewer, but in a way that should leave you feeling curious about what lies within.  ARE you curious, Dear Reader?  I can’t quite tell what that giant swamp monster thing is doing, but it might be inhaling a tree — definitely it looks like it’s causing some sort of massive destruction.  The creature itself looks pretty grim and brutal, like you might expect to find on the cover of some pretty brutal death metal, right?  Then in the background, the scene is all outer-spacey and there’s like a transdimensional portal or something, exactly the sort of imagery that would be well-suited to some experimental tech-death music, wouldn’t you say?

I think you can probably guess what this is leading up to, and you’d be right: the material found on Manifest, the recently-released EP by Los Angeles’ Mouth of the Serpent, turns out to be an interesting amalgamation of all of the above — and much more! 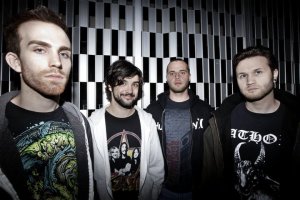 MOTS guitarist Andrew Rubin contacted me after he saw my recent review of The Great Tribulation by Sangre (whom he says they had been friends with for quite a while).  I’m assuming he felt that it was the most beautiful piece of prose he’d ever read, and that he was nearly moved to tears by the excellence of the writing.  Of course, I’m only guessing about what actually happened, and it’s possible I could be embellishing a little bit or even completely making this up.  In any case, he wrote to me, saying that he would greatly appreciate it if I could take the time to write about his band’s new release as well, so I am more than happy to oblige.  Especially when I’d already had some exposure to the music and already knew I was going to like it.

Just like in Sangre’s case, the first time I heard of this band was when their song “Psychosomatic Disorder” was included on a Kosher Metal collection, Kosher Komp Vol. 1.  If you somehow missed out on that, you can grab a free download right here.  This song is also available as part of the Swimming with Sharks Records sampler, which you can download for free from here.  If you’re really super lazy (or you don’t want to download anything) you can just listen to the song on Bandcamp, courtesy of Kosher Metal.

Then, earlier this month when Kosher Komp Vol. 2 was released, once again there was a Mouth of the Serpent song included — this time it was “Cisterna.”  Now you definitely should already have gotten this compilation, since I wrote a whole post about it when it was released, but you can download that one from here if for some reason you didn’t get it yet.  Once again, if you are too lazy to do the download thing, the song is available for your listening pleasure at Bandcamp.

As you can hear, both of those songs are pretty progressive-leaning, successfully walking along the border between brutal and technical death metal, two sub-subgenres that can often seem to be at odds with each other, although they are blended together quite adeptly in this case.  The blunt force of some of the riffing here, in conjunction with the striking precision of the drums and the guitar leads, brings to mind others who have crafted sounds borrowing from multiple strains of death metal; Dying Fetus is one prominent example.  That comparison also seems to arise from the dual-vocal attack used here, particularly in the sound of the deeper, more gutteral voice — the other vocal part is a bit more reminiscent (to me, anyway) of Exhumed, back when they had dual vocalists.  The big difference here, though, is that there is only a single vocalist credited on this album; major kudos to Max Reis if he is, indeed, the only one performing these parts.

Together, the two songs featured above make up roughly half the running time of this six-track package; “Entheogen,” which is sequenced immediately after “Cisterna,” follows in a fairly similar vein to its predecessor, although it tends to bring just a touch more brutality — and the vocals here briefly slip from gutteral to nearly “bree” territory a couple of times.  All of that would be fine, if that were all this band had to offer, but actually what you’ve heard so far is only half the story of this album.

Manifest opens with some cavernous atmospheric sounds, including some tribal-sounding percussion (courtesy of Rubin and fellow guitarist Justin Biddle, who each evidently serve double-duty here by also playing the djembe), in a brief track called “Caravan,” essentially the introduction into the one-two punch of “Cisterna” and “Entheogen.”  Then, we are treated to a bit of an interlude in the form of a two-part suite called “Siphoning.”  The first of these, “The Task,” returns to the atmospheric feeling of the intro, adding another sprinkling of ethnic percussion sounds (including a goat-hoof shaker) as well as some didgeridoo-esque throat singing (performed by vocalist Reis and, interestingly enough, cover artist Koehl – who also contributes some of the percussion parts).  This segues into the second part, “The Unmaker,” which heads in yet another direction, as this consists mostly of jazz-inspired experimental instrumental prog-metal.  Very interesting and well-performed, particularly in some of the vamps and fills provided by bassist Luis Echevarria, the track also incorporates some syncopated riffs that tie the material back to the death metal that comprises the rest of the record, prior to fading away after a mere two-and-a-half minutes.  That would be my only complaint: I would not have minded if the song had continued for another few minutes.  In fact, the overall length is the only downfall I can find in this entire release; these tracks are followed by “Psychosomatic Disorder” and then suddenly (and, I might add, somewhat unexpectedly) the EP is over.

Anyway, as a supplement to the songs that have been made available for streaming or downloading, the band also has a Youtube channel, where they recently put out an official live version of the closing track:

So anyway, I guess all that’s left would be to tell you how to get a copy of this EP for yourself, right?  As described in this press release, the band signed to Dallas-based label Swimming with Sharks Records (run by The Browning‘s drummer Noah Robertson) earlier this year, and in January they made Manifest available via their online merch store.  Take a look around; you’ll find some cool deals including one bundle that offers the CD along with a t-shirt and poster.  If you prefer, you can buy the digital download version

instead.  (Note: MOTS’s 2010 album Inception is available on CD in the merch store as well, or it can be downloaded from Bandcamp using the “name your price” option.)

2 responses to “Out Last Month: Mouth of the Serpent – Manifest”