Well, it’s time once again for the “Signmeto” Unsigned Band of the Week feature, that thing where I talk about a band who has written to me on the “Sign Me to Roadrunner Records” website, looking for reviews of their music.  I listen to it, write about it, and share it with you.  Ready?  Here we go.

That’s how Jack Antonio of The Jack Antonio Project identifies himself.  He goes on to describe this “comedy music” as being “raw and simplistic and almost ‘bad’ on purpose to capture your attention,” with “the humour of Frank Zappa, the bizarreness of Captain Beefheart, the simplicity in songwriting of Daniel Johnston, the leftist politics of Jello Biafra and the voice a mixture of Doctor John and Tom Waits.”

This project was formed last October, in Yellowknife, Northwest Territories, by a Canadian gentleman operating under the eponymic pseudonym.  During the intervening months, the concept has expanded from being a single singer/songwriter to working with a full backing band; at the end of February an EP was officially released, and is now available for purchase — stay tuned for further details on that, later in this review.

The three songs included on Jack’s Signmeto page do seem spread across that spectrum of growth: “The Moose is Loose” consists of only the man and his piano (plus a generous dose of animal noises), while “Sleeping Dogs Lie” adds a few layers of punk guitar chords and a drum machine (and a bit of dialogue between characters whose voices are pitch-shifted either ridiculously up or down), and finally, “I Need Help” benefits from the full band treatment.

Being comprised solely of a voice and a simple piano line, “Moose” follows in a long tradition of comedic music — recently employed in the stand-up acts of such performers as Zach Galifianakis, Demetri Martin, and countless others.  In the case of this particular song though, whatever humorous value might have existed gets overshadowed (at least in the ears of this listener) by the lazy rhyme scheme: the opening line (which gets repeated with each new stanza throughout) “The moose is loose, and so’s the goose” basically sets the stage for the remainder of the song, from a lyrical perspective, and I just find it difficult to place much value or emphasis on what is being said.  Unfortunately, for songs of this nature, there really isn’t much to grasp onto beyond the actual lyrical content, so to me it ends up falling flat.  Speaking of falling flat, there is a spot just before the end of the song where Jack strikes a wrong chord, to which his response (on tape) is “screw it!”  Whether this was an intentional flub for comic effect, or an actual mistake, it seems as though it could serve as a metaphoric indicator for how much care and effort went into the writing, performance, and recording processes.  It cannot be determined, simply by listening, whether this would be a fair assessment or not, but personally I do not believe that just because a style of music is not serious by nature, it couldn’t (or shouldn’t) be worthy of being respected or taken seriously.

Anyway, as I mentioned before, “Dogs” adds some gritty guitar parts layered on top of some starkly un-gritty drums.  I’ve never been a fan of synthesized drum parts, with very few exceptions; sometimes the robotic vibe can be lessened by burying the part beneath layers of other more interesting parts, but then you can run the risk of obscuring or muddying the other parts, especially the vocals.  This song seems to suffer a bit from this sort of malady, especially the previously mentioned pitch-shifted talking, which is tough to understand at times.  However, at the end of the song (after all the instruments have dropped out) it is crystal clear that Mr. Antonio is once again eating some chips, courtesy of some rather loud chewing sounds matching those which conclude the previous song.

Finally, “Help” — the last of the three songs on the website — has a tempo that seems a little on the slow side, and a bass part that sticks out too much in places, but nevertheless it does sound pretty good and is a welcome presence in the arrangement.  The drums here also sound way better — much realer.  Not perfect, which is definitely an improvement over bland and robotic.  Unfortunately, the guitar solo here is rather unpleasant — it adds nothing positive to the song, and has a particular “first take” feeling to it.

Overall, I’m of the opinion that a little more effort put into the writing of these songs would go a long way, and perhaps a few more run-throughs before committing to a “finished” recorded version.  As it stands currently, these tracks don’t do a whole lot for me, but I do see a great deal of potential in this project.  Also, from listening to the grapevine of reviewers associated with the Signmeto website, Jack Antonio’s alter ego Jack Canada seems very active and involved in the music community there, and (despite the initial impression upon listening to these songs) he does seem to take his art — and any criticism or reviews, positive or negative — very seriously.  One thing I have learned, like it or hate it, the Jack Antonio Project is definitely creating lots of buzz!  If nothing else, you should at least check it out and see what all the commotion is about… 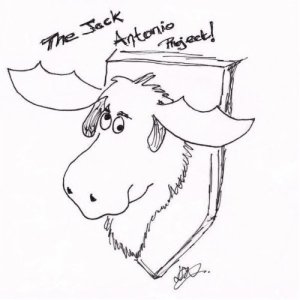 I hope you liked this post; please feel free to share your opinion (of the music, of the review, of me, whatever you feel like) in the comments below!  Until next week… if you happen to stumble across something you’d like to share (or if you are in a band and are trying to get your music heard), just write to me at my Signmeto “scout” page.  Thanks for reading!

2 responses to “The “Signmeto” Unsigned Band of the Week: The Jack Antonio Project”

Question: What is a double rainbow?