Do you remember back in the day when the word “industrial” as a descriptive term for music was actually meant literally?  Back before any snotty little kid with a drum machine could just dial up some digital distortion in Garageband, puke out some techno dance tracks onto his MacBook, and think he’s the next Trent Reznor?

Meet Tristan Shone, the San Diegan mechanical engineer who is otherwise known as Author & Punisher.  In case you hadn’t guessed, those little doodads and whatsits he’s holding in the photo above are not some newfangled kind of XBox controllers or something.  No, Tristan has manufactured himself a virtual army of mechanical and robotic devices whose sole purpose is to make a cacophony of industrial noises. Literally.

With a few releases already under his utility toolbelt, this one-man noise factory has got a brand new album Ursus Americanus slated to be released by Seventh Rule Recordings on 24 April, 2012.  However, as the kind folks at Catharsis PR have brought to my attention, you can have the opportunity to catch a sneak peek at a couple tracks from that record right now! 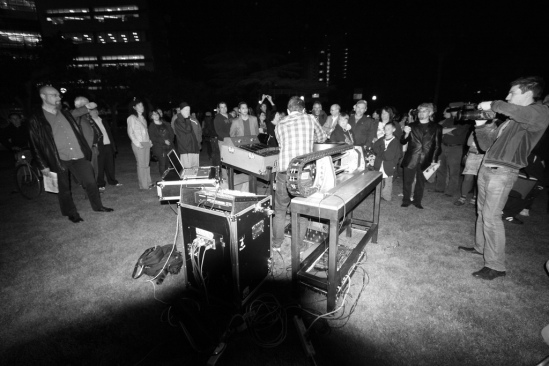 First of all, Decibel Magazine is currently offering an exclusive stream of the song “Terrorbird” at this location.  Built on top of a drum part that’s a bit reminiscent of a song like “Reptile” from The Downward Spiral, this track features layer upon layer of slamming, pulverizing, harsh noises drawn straight from a hellish nightmare wherein the listener somehow has been strapped to a slow-moving conveyor belt through an assembly line that culminates in a blast furnace.

In addition, the always-engrossing blog American Aftermath is not only streaming another exclusive track (“Flesh Ants” – which is somewhat more electronic and glitchy in nature, but very aptly titled, since the sound here is precisely what I would expect to hear inside my head during the process of being eaten alive by a horde of tiny, robotic insect creatures), but also features a fascinating interview with Mr. Shone himself.  For your listening and reading pleasure, step right this way.

If these small samples have left you as intrigued as I am, the artist’s official website will give you loads more information, including a video and write-up for Wired Magazine which focuses on the machines themselves, and plenty of other performance videos, recorded both live and in the studio.  Trust me, as interesting as these sounds are to listen to, nothing compares to getting to watch them being created. Maybe it’s just me, but I think it’s pretty incredible how someone can take things so mechanized and robotic and inhuman, but use them to produce a sound that’s so much more organic than most of the music being made these days.

Then, you can preorder Ursus Americanus on CD

, or you can always grab the MP3 downloads of the three previous Author & Punisher albums