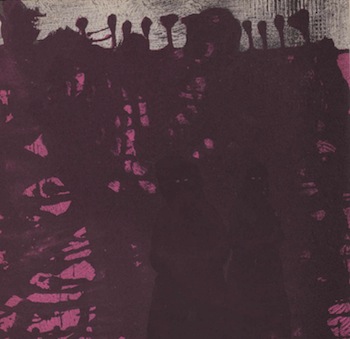 Okay, stop me if you’ve heard this one before.

The rest of his bandmates came back from wherever they’d been all day, and walked in to find a hellish nightmare: there lay his lifeless body, extinguished by his own hand while he’d been home alone.

It sounds like a tale from Until the Light Takes Us, I know, but this was the story of Tommy Atkins, bassist for Denton, Texas’s The Great Tyrant. Bandmates Daron Beck and Jon Teague reportedly discovered him in the bathroom. Having found their band reduced from a trio to a duo, they decided to continue on under a new name — in honor of the terrible scene they had come across, in which (they said) “the walls were pinkish black.”

With an origin such as this, it’s not at all surprising that the new musical project would seem inspired by and surrounded by death. Sometimes frightening, sometimes peaceful; sometimes horribly ugly, sometimes angelically beautiful; sometimes all of these at once. And dark. Such an intense darkness that it could almost blind anyone who gazes upon it.

Opening with swirly, flangey synths reminiscent of the opening of Alan Parsons‘ I Robot (maybe it’s just me, but that’s the first place my mind goes when I hear that sound), “Bodies in Tow” soon entirely engulfs the listener in a near-suffocating mass of distorted bass and pounding drums. The atmosphere of doom and gloom is made complete by the addition of chanty vocals that are reverbed to the point of near-intelligibility. More synth leads and theremin sounds are complemented by some gorgeous harmonious singing, lending a strong vibe of psychedelia to the doomy undercurrent. This combination remains a recurring theme throughout much of the album.

The heavy bass and drum rhythm section, along with the synth and theremin sounds, have the ability to instill feelings of serenity or of sheer panic; the tempo and volume tend to vary from song to song to fit with these different moods. However, whether it’s the frenzied shuffle of “Everything went Dark” or the broodingly slow groove of “Passerby,” there is an ever-present heaviness and an overwhelming sense of darkness abounds.

Atop a bed of intense anger, songs like “Fall Down” or “Tell Her I’m Dead” feature equally intense, yet often mournful, vocals. These feel introspective and distant, as though burdoned with the great weight of tragedy — every bit as dark and expressive as an Ian Curtis or Nick Cave.

The funereal, dirgey “Tastes Like Blood” seems to utterly personify grief in the most agonizing sense. Closing track “Against the Door,” in contrast, is deceptively up-tempo, but the dissonance and distortion in combination with the driving rhythm and the spacey synth leads are about as frightening and unsettling as hallucinating a legion of marching zombies during a bad acid trip in the middle of a rave.

I know that doesn’t make any sense, but while listening to this music it’s difficult to form coherent thoughts and put them into words. It’s as if the guys in Pinkish Black are trying to let the listener experience some of the chaos and confusion of emotions they must have felt when they walked in on … what they walked in on, that one day.

Released just eight days ago by Handmade Birds Records, the vinyl copies of this album have already sold out (as of last night), but you can still listen to the album and buy a digital copy through Bandcamp:

One response to “Out Last Week: Pinkish Black – Self-Titled”