Maybe it’s because of when I was born (after Star Wars but before The Empire Strikes Back) — I just barely missed out on the original genesis of both the punk and heavy metal movements; I was too young to get much exposure to either genre until the late 80s, and when I did start listening to some of the stuff in my pre-teen years and beyond, I didn’t really have any sense of the history behind either scene or the animosity that existed between them…

I don’t know what the explanation is, exactly, but I do know I’ve always had one foot on each side of the line, not really caring about definitions or labels or exactly what separates “punk” from “metal” — and in fact, I tend to gravitate towards stuff that has a little of both flavors (and attitudes) mixed in. I’ve never understood the mindset of people who seem to think they have to pick a side, and refuse to acknowledge anything that the other team has done. To me, if it sounds good, it sounds good — it doesn’t matter what you call it.

That’s why I don’t really get the attitude of the folks who maintain the Encyclopædia Metallum, who (from what I’ve heard) are very particular about genre classifications, and extremely selective about which bands they approve for inclusion in their archives. Almost entirely absent from that compendium of musical knowledge: anyone who would be considered more closely associated with the realms of hardcore or punk (including grindcore or crust) than what they consider “real” metal. Where exactly the line is drawn, though, isn’t always completely clear. For example, it seems Napalm Death qualified as exceptions to the rule, as did Motörhead, yet the Misfits seem to have been overlooked — despite being no less influential in the metal world than either of the others.

Anyway, I could go on rambling about this for the rest of the day (and I’d be glad to hear YOUR thoughts on the subject — just visit the comments section below, or hit the VoS Facebook page, whatever works for you), but I really came here just to share some new music with you. That would be the new EP by Strong Intention, Razorback Express — now available on 7″ vinyl through Patac Records!

Strong Intention formed in the mid-90s, in Frederick, Maryland — which is near the center of the state, but not too far from Baltimore or some of the hotbeds of stoner/sludge/doom metal across northern Virginia, while being just as local to the D.C.-area hardcore scene that (as I recall) was still pretty big at that time. And, for that matter, just a few hours down the road from NYC, one of the biggest breeding grounds for east coast hardcore.

So, it should come as no surprise that they sound like a mixture of these different influences. Much of the material here follows a pretty standard hardcore/grindcore style — two songs are just under a minute long, and another two are right around a minute and a half in length; everything sounds noisy and dirty, full of buzzy guitars and 40-meter-dash drumming, and featuring razor-sharp shouted vocals.

On the other hand, from time to time some more sludge-metal vibes tend to creep in — especially on the two longest songs here, the title track and “3rd Space Gorilla Generator” (two and a half minutes, and two minutes, respectively). Scaling back the tempo a bit and centering around thicker, murkier riffs, these songs nevertheless keep the grind attitude and grittiness. Even in one of the shortest songs here — the 55-second “Rat Factory” — the band demonstrates a wide range of dynamics by breaking down into some snail-paced doom chords, briefly, before returning to the previous energetic grindpunk for the finale.

Of course, it’s also possible some traces of sludginess may have come by association with the EP’s guest star. Vocalist Mike IX Williams of New Orleans sludge-metal tyrants Eyehategod makes an appearance here on the title track and “3rd Space” — as I mentioned, these two are also the most sludgey of the bunch, but Williams’ vocals have always hovered on the border between metal and hardcore anyway, so his contributions sound right at home among the nihilistic shouting that fills the remainder of the record.

You can listen to Razorblade Express here, and you can also purchase the download through Bandcamp…

…but I don’t know why you’d want to do that, when for just a buck more you can get your very own copy on black vinyl or colored vinyl!

…especially now that Patac Records has announced a 10% off sale for all orders this summer! (Just use coupon code “SCUMBAG” when checking out). 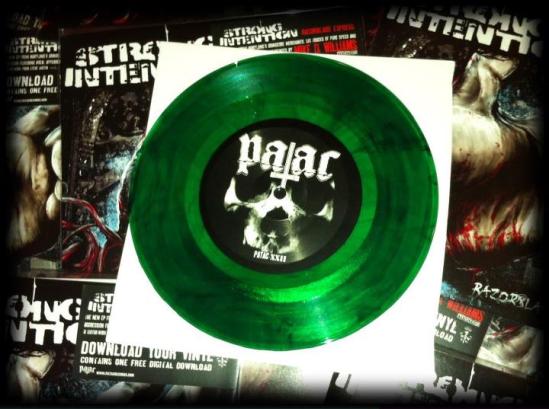