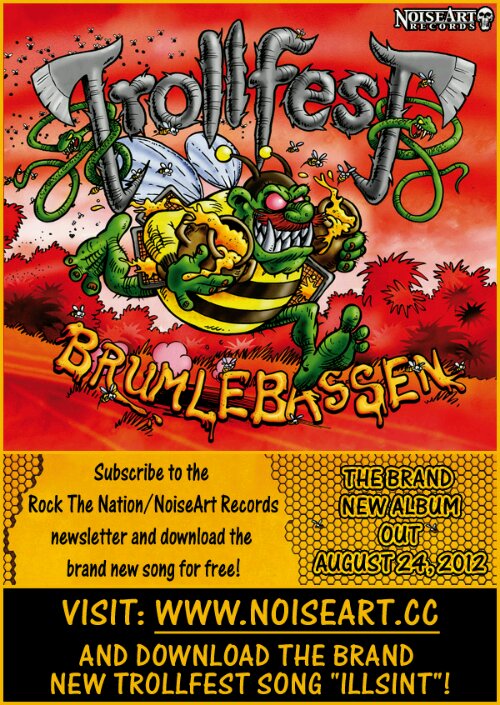 That’s right, everyone’s favoreite True Norwegian Balkan Metal band TrollfesT, in conjunction with their label NoiseArt Records, have made one of the songs from their upcoming album Brumlebassen available as a FREE MP3 download!

The song will be available for download for one week only, so hurry!  (Offer ends next Friday, 06 July).

“We’re always exited to debut a track from a new album, but we’re even more so this time because thanks to NoiseArt a track from Brumlebassen is not just being debuted, it’s being made available to everyone as a free MP3 download.  Make sure you go along to www.noiseart.cc right now, because it will only be available until the 6th July, and get your hands on “Illsint” – the hottest freebie in town. Enjoy!”

If the chance to download the song “Illsint“ isn’t enough excitement for you, here are MORE treats for your eyes and ears!

This first video is a behind-the-scenes look at the making of the song (which was excerpted from the full-length documentary on the making of the album — just one of the many cool extras that can be yours with purchase of the Brumlebassen digipack bundle!)

And next, here is a lyric video for the song:

Brumlebassen will be released on 24 August in both limited edition digipack format and gatefold vinyl.

In case you’ve missed any of my numerous recent updates about the band, you get better acquainted with these trolls than if you were a goat with an affinity for crossing bridges, just click here.