The Fat Dukes of Fuck – Honey from the Lips of an Angel (self-released, 25 September 2012)

Hey there, fellow music afficianados.  I don’t know if you noticed, but it feels like all of a sudden, there have been all kinds of huge releases over the past couple of weeks!  Not in the sense that they’re bands who’ll appear on the cover of major magazines, or will hit the mainstream radio airwaves or anything like that, but significant to me, because I’d been looking forward to them for a long, long time!

Well, in any case, there have been a few that I’ve been excited about, and I’ve been listening to them and I definitely plan on publishing reviews for some of those in the very near future.  Don’t worry, we’ll get there.

Today, though, I feel compelled to share something with you, which was not one of those highly anticipated albums. Not because there’s anything wrong with it, I don’t want to give you that impression — but simply due to the fact that I’d never heard of this band before their new album came out last week, so obviously I wouldn’t have been able to look forward to it!

Yeah, the Las Vegas-based group called The Fat Dukes of Fuck, and their brand-new album Honey from the Lips of an Angel caught me completely by surprise. But I have to be honest, as soon as I heard the band’s name, I felt overcome by curiosity, and immediately knew this was something I needed to check out… 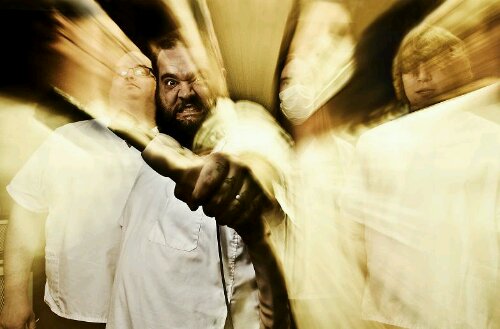 Just judging from the album’s outward appearance — including the cover art, with the angel from the title portrayed here as scantily-clad, barely-SFW, and holding a, uhh, bottle of honey in each hand in a rather suggestive manner; and of course, all those song titles (“The Mighty Bulge,” “Sorry About Your Dick,” “Oral Agenda,” etc.) — I guess it would be natural to assume you’re going to encounter some raunchy humor. And there, you will not be disappointed.

No, despite the fact that this album is primarily a neverending stream of dick jokes, you may be surprised to find that there’s also plenty of clever wordplay throughout — and songs that are catchier than most STDs, guaranteed to have you singing along after just one listen.

A hard-rocking tour de force filled with chunky, groovy guitar riffs (which sometimes stray into more metallic territory, such as the rather thrashy “Cigarette”), both musically AND lyrically, The Fat Dukes come across sounding every bit as macho and heterosexual as Scissor Sisters aren’t. But nevertheless, there are points all over this album that are just as likely to make you get up and shake your ass.

The falsetto backing vocals in the chorus of the opening track (the part where they say “Feel it!” in between the lines “Look at my bulge / don’t you want to feel it, girl?”) might have contributed to my brain conjuring up that specific band to compare (and contrast) with. But the goofy urgency of “Step Aside and Let That Fucker Dance” will almost certainly set your body in motion just as much as a song like “I Don’t Feel Like Dancing” would.

Each song on this album is full of unique character, and they’re all pretty catchy and memorable — so it’s hard to just pick out a couple highlights to discuss. But after you’re done reading (or before, if you’re really impatient), you can check them out for yourself using the Bandcamp player below. So I’d just like to briefly mention that my favorite part is actually the last song, which is the title track. A little slower, darker, and more brooding than those which precede it, this song is still packed with strong melodic hooks — but those are based on a huge seventies-style distorted organ riff that doubles the vocal and guitar lines. Just another example of how this album is full of pleasant surprises at every turn.

Check out Honey from the Lips of an Angel here, then you can head on over to the FDOF website to order a physical copy.