The first step is admitting it, right? So here goes… “Hello, my name is Mrs. VOS, and I am addicted to Solarburn.”  I have seen them numerous times, and will again soon; I had their CD in the CD changer in my car for a record 12 weeks straight, and for a long time it was the band that I would talk about every chance I got. It’s not as if I wish to be cured of my addiction or anything; in fact I’ve decided to just own it, and I am perfectly willing to help others get addicted too.

This pretty much is THE band for me, the band that opened up a whole new level of musical enjoyment in my life, and the band that I shamelessly promote every chance I get, quite like I am doing right now. Yes, if you haven’t seen them yet, you’re honestly missing (in my humble opinion) one of the BEST things about Pittsburgh! But you can fix that April 2nd when they open for Otep at the Altar Bar.

They are three of the nicest and most genuinely no-BS guys I have ever met in my life, and these dudes can shred like nobody’s business. So how did I just pick one of them for Person or Persons Unknown? As hard as it was (and honestly it WAS hard, because I am lucky enough to actually be friends with [guitarist] Mike [Stains], [drummer] Russ [Tompkins], and [bassist] Tony [Thomas]), I ended up choosing the person I connected with immediately in the beginning, at the first show at I ever saw Solarburn play — way back in August of last year. Immediately, I felt that Tony was more than just an awesome bass player, but that he also a had deep knowledge of music, which I respected and connected with. As you’ll see from this interview, that is definitely the case.

Hello Tony, and thank you for taking the time to do an interview with me for Person or Persons Unknown! As a huge fan (and I mean huge) of your band Solarburn, I have been wanting to talk to you about your musical influences for a long time.

I grew up in a house where my parents listened to everything from Marvin Gaye to The Ohio Players to Little Anthony and the Imperials to Robert Johnson to Frank Marino and Mahogany Rush to Black Sabbath to Roy Buchanan and back again. In a way, I feel like I am always looking for connections to the music I grew up with in a lot of what I listen to today (which is one of the reasons I love your band so much).

Did you also have someone (a relative or other important person in your life) who was influential in defining your diverse style, and do you still find yourself connecting back to the music you grew up with in what you listen to (and write and perform) today?

Many people were hugely influential in how I grew as a music lover and musician. I was blessed to have four older siblings who introduced me to Iron Maiden, Led Zeppelin, Frank Zappa and the Mothers, early Genesis, Queen, NIN, Tool, R.E.M. My best friend since the age of two ([and currently] singer of Old E Allstars) [had a] father [who] was a blues singer; we were always at his shows. He introduced us to a lot of Stax, Motown, and doo-wop. Otis Redding, Wilson Pickett, The Temptations. My father was a soul singer who gave me an early education in Parliament/Funkadelic, Curtis Mayfield, Prince.

So all that combined with growing up in the 80s and 90s made for lots of classic and golden era hip-hop as well. As a musician, I feel it’s my job to dissect and understand what I’m listening to. It isn’t enough for music to be mildly entertaining, it has to be challenging. Because of that, I listen to a lot of classical and jazz in my free time. Prince, Zappa and Funkadelic are huge staples as well.

I know that you also play bass for The Old E All-Stars, and it seems to me that keeping an underlying funkiness in everything is an important aspect to who you are as a musician. What funk or soul artists do you look to for inspiration, and how do you keep it fresh and apply that to Solarburn as a primarily rock/metal band?

Definitely George Clinton, Prince, Sly Stone. Funk is always fresh. It’s an attitude and lifestyle, the style of music is just one means of expression for funkiness. It’s who I am. Other than our volume and speed, I don’t even see us as a metal act. The genre and title is more for others looking in. We just try to make the best music we can, and continue to challenge ourselves.

You are definitely a bad-ass bass player (one of my personal favorites). Is there someone or something in particular that influenced you to choose that instrument? Also, is there any other instrument you play that people might not know about, or something you would like to learn in the future?

Haha, thank you very much! I started on sax, but it just didn’t stick. My best friend started playing guitar and it was a natural choice for me. I had no idea how much I would love it and that it would become my life. It’s the best decision I ever made. I play some guitar and a little mandolin. The only musical hurdle I haven’t achieved is to refine my voice and learn to sing the way my father did as I was growing up. He has a voice that would shake the neighborhood. I loved coming home from school and hearing him sing.

Besides being a musician, you’re a pretty diverse, free-thinking type of guy with an interesting sense of humor; what are some things you draw inspiration from or that are important to you, other than music?

I love history, so documentaries are huge to me. All types, military, religious, cultural. I especially love science on all levels. When it comes to books, I love music bios. I’m a bartender and bar manager; the bar I run (Eclipse Lounge) has no TVs and no jukebox, we select the music and we are the entertainment for customers, so it’s important for me to be well versed in many subjects and be able to hold a conversation on any level. Because of that, I find inspiration in anything and everything. I love breaking rules. Any chance to do things differently is inspiring to me. 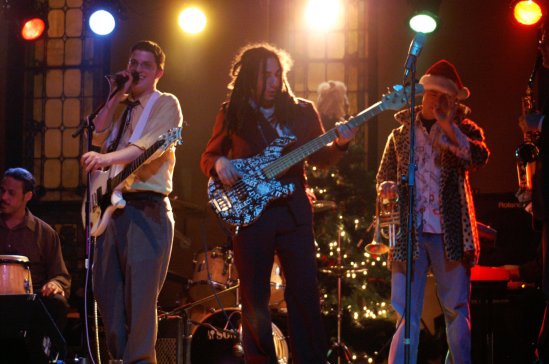 On April 2nd, you are set to play with Otep at the Altar Bar. I heard that this will be your first time playing at that venue, but it seems like you guys in Solarburn are generally open to playing in just about any setting with anyone. If you had your choice, who would YOU like to see your band play shows with in the future?

The people I want to play with are the ones that will blow us off the stage. I love that challenge and competition. Gov’t Mule, Prince, the bands that just can’t be touched are who I dream about playing with. I would love to have to hold my own around that level of greatness and experience.

Can you describe your musical style in six words or less?

Again, Solarburn will be performing at the Altar Bar on Tuesday, April 2nd, along with Otep, One Eyed Doll, Picture Me Broken, and Long Time Divided. More details on that show (presented by Drusky Entertainment) can be found here.

All three band members (Tony, Mike, and Russ) will have advance no-service-charge tickets for that show, which they are selling cheaper than you will find through the venue or the promoter! For more information, contact them on Facebook or via the official Solarburn email address, thescumbag(at)gmail(dot)com.