Well folks, the last weekend in May is upon us, which means that most of my peers in the music-writing industry (and many of my other metal-loving friends as well) have made their annual pilgrimage to Baltimore for the year’s largest metal festival (outside of Europe, of course), Maryland Deathfest. Once again, a number of huge names jumped out at me from the announced schedule (Hooded Menace! Crowbar! Fucking Candlemass!!), but also once again, various factors have conspired against me being able to attend.

But — whatever, I’m not just going to sit around all weekend and whine about it. I’ve got plenty of good music to keep me company, and I fully intend to listen to all of it. All of the musics. For starters, although I will not be seeing Californian sludge band Seven Sisters of Sleep performing at the MDF kick-off show tonight (Thursday, 22 May 2014), I can always stuff their second full-length Opium Morals (which happened to rank among my favorite albums of 2013) into my ears. And while I’m at it, I can share it with you readers (who, I assume, are reading this because you also not at the festival in Maryland right now). So here goes. 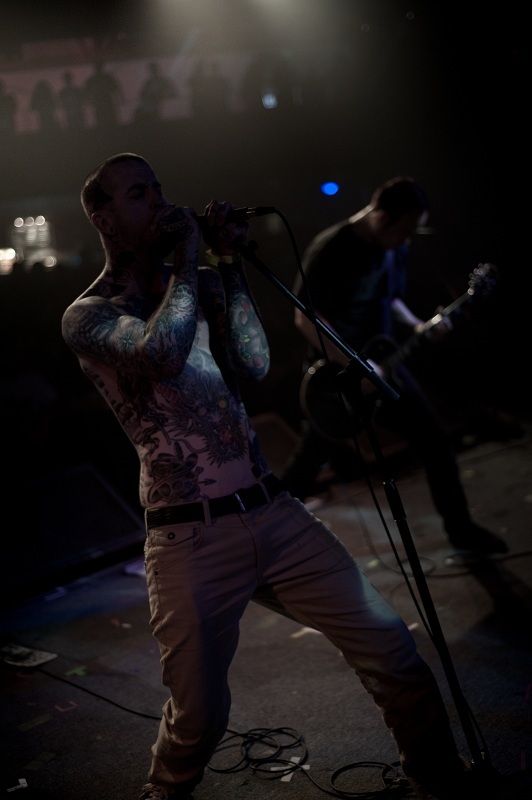 Having graduated from the Eyehategod school of classic sludge-metal, Seven Sisters of Sleep tend not to deviate much from the time-tested formula of murky down-tuned riffs chugging along, alternating with the occasional double-tempo bits, setting the foundation for hardcore-inspired shouting-through-a-distorted-megaphone style vocals. This no-frills approach is like a breath of fresh air when compared to some of the over-processed, overwrought, artificially colored and flavored nonsense that happens far too often nowadays.

The band’s raw grittiness is on full display in such songs as “Sunday Mass Grave” and “Reaper Christ,” each of which open with some quick bursts of blasting, followed by a series of throw-your-fist-in-the-air slowdown sections (which are often joined by vocals of the ferocious death-roar variety). On the other hand, one of the album’s earlier tracks “The Flock” starts out already fairly slow, with a devastating churning and grinding riff for about the first minute or so, but then slows down even further, simply smothering everything in its wake, the whole rest of the way.

Since the quality level stays so consistent throughout, it’d be hard to pick out an actual standout or favorite track here, but I did especially take notice of the second song “Moths,” with a lengthy introduction that’s slower and a bit more atmosphere; this provides plenty of contrast for when the song actually kicks into gear about two minutes in, with a pounding riff that just constantly pummels you right in the chest. Another highlight is “White Braid” that features a cool repeated guitar pseudo-melody that the rest of the song builds around (at varying speeds, of course).

Essentially, the message that seems to emanate from this album is, “Here’s ten songs, nothing fancy, and they’re all relentlessly heavy as fuck. Deal with it.”

A389 has been kind enough to provide us with a full-album YouTube stream:

If you prefer, you can also preview or download the album on Bandcamp right here.

Buy Opium Morals on CD here, or on vinyl here.