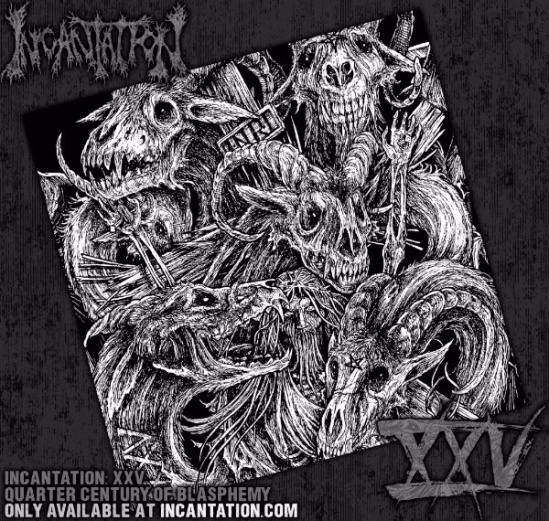 Way back in 1989 — about twenty-seven years ago — death metal was just beginning to grow out of its infancy. The genre had recently splintered off from thrash, with bands falling over each other trying to sound heavier, faster, more sinister, and more extreme than anything that had come before. But by this time, the “death metal” sound was already starting to expand; similar to the way thrash had been evolving and further distancing itself further from its hardcore punk roots, newer death metal bands were starting to add a greater technicality or progressiveness to the music, a wider range of tempos and dynamics, as well as beginning to incorporate various other influences. One of the newer bands to emerge around that time was Incantation, who employed the typical death metal aesthetic, while often sticking with more of a mid-to-lower tempo — allowing the intricate guitar solos and riffs to shine through more clearly than in those bands who chose to join the neverending maximum speed arms race.

Living in Johnstown, Pennsylvania — a place I myself have visited before; pretty much its only claim to fame is the fact that they had a big flood once, as evidenced by the fact that one of the few things to do there is to tour the Johnstown Flood Museum — naturally the band would spend a lot of their time traveling and touring. While undergoing numerous different line-up changes and using countless live musicians throughout the past couple of decades, Incantation has been all over the world multiple times. But early in their career they became aligned most closely with pioneering New York death metal bands like Suffocation, and especially Mortician (with whom they’ve actually shared or swapped members during a time or two in their joint histories).

From their debut album on Relapse Records, Onward to Golgotha, through later releases on Candlelight and their own label Ibex Moon, and finally through albums this decade on Listenable Records, including their latest, 2014’s Dirges of Elysium, the band has continued to push the envelope creatively, while garnering critical praise as well as a rabid international following. And now, after a quarter century of material, Incantation have put together a retrospective package that includes highlights from all over that lengthy career. This vinyl-only release (which is only available directly from the band) includes all new, never-before-released recordings: one completely new song and a few re-recorded gems from their earlier days, plus a number of live versions that are exclusive to this package. The new compilation, titled XXV is now being offered for sale to fans, including a few package deals with merch you also won’t find anywhere else …

The XXV retrospective is currently available on vinyl in black or white, and so are packages that include shirts (in several designs/styles and two color choices) or fleece blankets featuring the album cover design!

The following video will give you a sneak preview of the new recordings, with commentary from John McEntee (the band’s sole remaining founding member, guitarist, and lead vocalist since about 2004) and Kyle Severn (who has been the drummer for the majority of the band’s existence) …

You can find plenty more information about the XXV collection here, or just head straight to the band’s store to order one of these packages here.