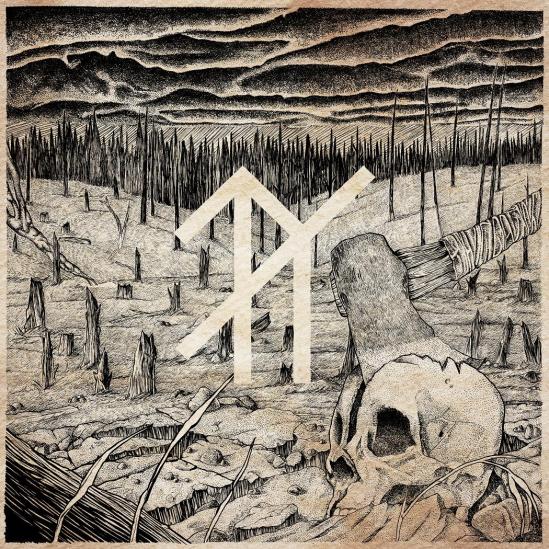 Hey folks! Just a quick heads-up: Madison, Wisconsin blackened doom band Bereft will be appearing in Pittsburgh tonight (05 April 2017) at Howlers! Also appearing will be Aseethe from Iowa and Cant from Pittsburgh, presented by Winterforge Productions — you can click here for all the details about that. But first, who the hell are Bereft? Well, I’m glad you asked. Step right this way …

Bereft have just released their debut full-length Lands a few days ago, via Prosthetic Records. But prior to that (nearly three years prior), they had another record out, Lost Ages, through Silent Pendulum Records. Let’s take a quick look at both of those, shall we?

Now the first thing you may notice is that, despite the fact that Lands is being marketed as the band’s first full-length, it actually only contains four tracks compared with Lost Ages‘ five. But the earlier release runs approximately half an hour in length (which I guess some could consider an EP?), a full sixteen minutes shorter than the new one.

And anyway, the first song on Lost Ages (which happens to be the title track) features about two minutes (of its eight minutes overall) worth of very long and slow crescendoing before the actual song itself kicks in. AND another of the tracks, “The Secret Fate of All Life,” is basically a two-and-a-half-minute interlude filled with atmospheric synths and laden with samples of Matthew McConaughey‘s character from True Detective sharing his rosy philosophy about mankind.

Throughout the other songs on the 2014 record the tone is generally just as bleak and full of despair as those spoken words, but delivered in varying forms somewhere between blackened hardcore and blackened doom. Often the arrangement is very dark and dense, with numerous layers stacked together — whether these are heavy doom chords or frantic black metal excursions — but on occasion many of the elements will suddenly drop away leaving a rather stark emptiness, emphasizing the density of the material even more strikingly.

The majority of the vocals here are likewise despairing, blackened shrieks and post-hardcore-style screams, but adding even more levels of depth to the presentment, here and there we find the accompaniment of some clean vocals as well. In the background of closing track “For Nothing,” for example, and providing even more contrast in the second song “Unwelcome” the harsh screaming is actually set against a Gregorian-style choir of vocals, that should certainly appeal to fans of Bell Witch.

Fast-forwarding a few years, the recent Prosthetic issue finds the band continuing its exploration of crushing monolithic doom — no introduction or prelude this time around, opener “We Wept” pummelling the listener relentlessly and instantaneously. These lengthier compositions (the shortest of which still exceeds the longest track from the album’s predecessor by nearly a minute) are filled with suitably Brobdingnagian tones, though with more room to spread out within each song, there is also a bit more of a melodic sensibility introduced here.

The same could be said about Lands‘ vocals: we find the incorporation of a bit more melodic clean singing — from “We Wept” through the latter part of “In Filth” and especially during the ambient and reverby opening of the final track “Waning Light.” But otherwise, most of this material features a duelling pair of voices, one generally more of the hardcore-doom variety, while the other tends to be more of a funeral-doom-death roar. Hopping from slow ultra-doom to a wicked black metal pace and back, incorporating the hoarse-hardcore-shouts, searing howls, and the deep gutteral roars, and threading a solemn and soulful melody throughout, this album could place the band squarely in the middle of a neighborhood occupied by Pallbearer at one end and Ahab at the other.

Grab your copy of Lost Ages here, and Lands here. Unless you’re able to pick up some merch directly from the band at tonight’s show — or if you happen to catch them at one of their other upcoming stops, which I’ll include for your convenience in the comment section. In either case, both of these records are highly recommended!