In a coincidence that ranks up there with both Baker’s chocolate and German’s chocolate cake, the bandoneon was named for the man who had invented it in the mid-nineteenth century, German music instrument dealer Heinrich Band. The concertina-style instrument was used to accompany religious and popular music of that time, spreading into eastern Europe where some had adopted it into their traditional folk styles — but the bandoneon’s popularity really took off when it reached Argentina, where it quickly became an integral part of tango music.

The complex instrument, which like other concertinas (but unlike its cousin the accordion) is designed to play different tones depending on whether the bellows are being squeezed inward or pulled outward in conjunction with various combinations of the thirty-three left-hand and thirty-eight right-hand buttons, became rather scarce after production had ceased near the end of World War II. But with a recent return to manufacturing in Germany — and especially in the past few years when domestic models are now being made for the first time ever in Argentina — it appears that the bandoneon and the tango music with which it is most closely associated may both be experiencing something of a resurgence in popularity.

Argentinian bandoneonist, teacher, and composer Amijai Ben Shalev had the idea to incorporate the instrument into the context of progressive metal, and so gathered together fellow porteños Marcos de Cristobal (guitar), Matias Brandauer (bass), and Marcos Edwards (drums), forming Bandolirium in 2016. As a taste of how this unique style would fit within the structure of metal music, the band released their rendition of “Por Quien Doblan las Campanas” (or “For Whom the Bells Toll”) in an instrumental arrangement, where the bandoneon sometimes slips into the background playing chords along with the rhythm guitar parts, but elsewhere produces a tango-flavored melody in the place of the vocals from the original song. Feel free to check out this recording right here, then continue reading as we address the group’s self-titled debut record which they’ve put out about a month and a half ago … 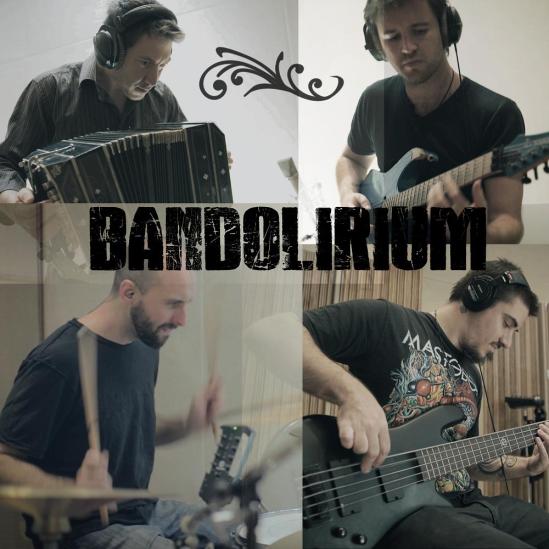 “Por Quien Doblan las Campanas” appears at the end of the Bandolirium album as a bonus track, following eight original songs, but I wanted to get that out of the way first — to acknowledge that it’s there and to let you hear it, but then to move along to the rest of the album. Because if this band would only be known for covering a Metallica song with the addition of a bandoneon and some tango elements, there is the risk of being identified as a novelty act (much in the same way Weird Al has been famous for adding accordion and adapting popular songs into polka arrangements). And that would be unfortunate, because Ben Shalev (who graduated from El Conservatorio Superior de Música “Manuel de Falla” and currently teaches at two different conservatories in Buenos Aires) and the rest of the band are serious musicians, who have created some serious compositions — just using an uncommon orchestration in the process.

Unlike many instrumental prog-metal or prog-rock bands, especially when principally led by one of the instrumentalists who is responsible for most or all of the music, Bandolirium is far more of a band effort than a solo project — the bandoneon sometimes is used for backing chords in unison with the guitar and/or bass; sometimes for quick runs that harmonize guitar and/or bass; sometimes the bandoneon and guitar take turns trading off lead phrases; often all instruments will join together in syncopated, riffs in harmony or unison; occasionally we’ll have a guitar solo with the bandoneon doing background chords, then perhaps later they’ll swap foreground and background parts. In many ways, the combination of bandoneon and guitar and bass parts is deployed similar to the way dual guitar parts are often used, either in harmony or unison or set against each other in a countermelody; other times one of the lead instruments will step out in front while the rest of the band holds down a sort of prog-thrash rhythm section groove, with the lead parts taking turns similar to how a jazz ensemble would operate.

While the whole album does fit the description of “prog-tango metal” with various tempo and direction shifts in true progressive fashion, two tracks that form the centerpiece — “La Milonga del Demonico (Parte I and Parte II)” (“The Milonga of the Demon,” where a ‘milonga’ is a place where people are dancing the tango) — really emphasize the “tango” half of the equation. The first part features a more traditional-sounding lead melody (although still with a hard-rock/metal backing beat); the bandoneon part often hits a few dischordant intervals that create a nice amount of musical tension. The second part comes in with a more lively, more spritely feeling; very much like the sound people normally associate with tango dance music, except here backed with drums and heavily distorted guitars …

Listen to the rest of the Bandolirium album using the Bandcamp player below, then grab yourself a copy here.