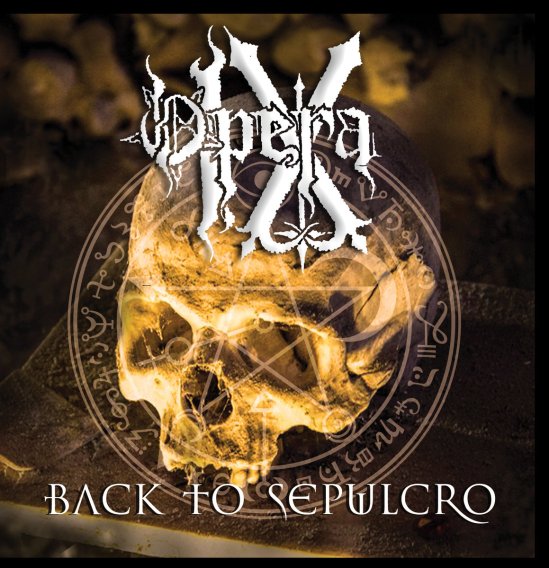 This year marks three full decades since guitarist Ossian started Opera IX in Biella (Piedmont region, in the foothills of the Italian Alps). The band has put out an extensive discography in thirty years, and undergone numerous line-up changes, as they gradually morphed into the titans of occult black metal they would become known as.

One major shake-up occurred back in 2014 with a wholesale replacement of the entire band (other than its founder), including the departure of bassist Vlad who had been around since very early on, and vocalist of the previous decade-plus M. the Bard (who sadly departed permanently late last year).

With a brand-new ensemble — including M:A Fog (drums), Alessandro Muscio (keyboard), Scùrs (bass) and Abigail Dianaria (vocals) — in tow, Ossian proceeded to put together an album (in late 2015) that featured brand-new recordings of several songs from Opera IX albums past.

In today’s post we’ll check out Back to Sepulcro — as well as discussing what the band has been up to since that time. (Spoiler alert: a new album anticipated later this year, plus an appearance at MDF later this month!)

The album’s title stems from the fact that some of the material here dates all the way back to “Sepulcro,” a 15+ epic from the band’s first album Call of the Wood (1995). The song has everything one could ask for: acoustic guitar, pipe organ, and church bells; riffs ranging from deep-heavy-slow to turbo-tremolo; a commanding guitar solo; very evil-sounding deep growled vocals; and tons of sinister organ parts (including perhaps a bit of Bach influence here and there.

Other re-recordings include “The Oak” from 1998’s Sacro Culto (starting off at a much furiouser tempo, like blacker-than-black metal, followed by huge crushing riffs, turning into more of a blackened death-groove); “Act I, The First Seal” from 2000’s Symphoniae Mysteriorum in Laudem Tenebrarum (with its dark and eerie intro leading into mid-to-full tempo blackened death, sprinkled with devious carnivalesque organ fills); and “Maleventum” from the 2002 album of the same name (ranging from a wicked whirlwind of madness to a fast-paced death march, here with mystical pagan melodies combined with fierce death-growls).

Building upon these new versions of older songs, the band also presents two new tracks: “Consacration” (showing a somewhat more orchestral side, along with some more acoustic elements, and a touch of gothic spoken-word, before bursting into an amalgam of the whirlwind- and carnival-sounding bits from earlier, and capped with particularly vicious snarls; and finally “The Cross (Outro)” (four minutes of eerieness, with trancey-chanty-choir singing set against a variety of spooky sound effects).

Find Back to Sepulcro for streaming or downloading here. The CD version is available here (shipping included).

Sometime last year, it was announced that the band would be making an appearance here in the U.S. at Maryland Death Fest (taking place Memorial Day weekend as always, this year it runs from the 24th through 27th of May). And then more recently there were whispers of starting to work on a new Opera IX record with their current line-up (except now with Charon on bass).

And that’s where our story would end, except that we’ve recently learned some new pieces of information. First, the vocalist of the Back to Sepulcro album suddenly announced her departure in early February, saying “As Abigail Dianaria, I officially announce my detachment from the musical path with Opera IX, especially for personal divergences. Moreover my musical path led me through another way, I’ll continue to sing with another name and I’ll go on, across this new route. Last of all I wish to Ossian and His Opera IX all the best!”

The emphasis on leaving “as Abigail” and intending to “continue to sing with another name” can be interpreted as the reader wishes. But shortly thereafter, it was revealed that vocal duties would henceforth be handled by Dipsas Dianaria. The planned appearance in Baltimore next week is continuing as orignally scheduled, and apparently the group’s NEW new line-up are soldiering on with work on the upcoming record (due later in 2018 via Dusktone).

So far we’ve learned that The Gospel will be “a concept album focused on the Italian myth of ‘Aradia and the Gospel of the Witches’ written by Charles Godfrey Leland, containing what he believed was the religious text of a group of pagan witches in Tuscany, documenting their beliefs and rituals.” Furthermore, the album’s cover art has been revealed (see it right here). Naturally, more information will be passed along as we receive it — but in the meantime go listen to Back to Sepulcro and grab your MDF tickets if you don’t have them already!