Hey folks! I’d like to share a quick little anecdote with you, then it’s time to talk about some more music. Deal?

Ok. So several months ago, this band called Attalla from Wisconsin wrote to me to let me know they’d released an album last year, and to see if I’d be interested in reviewing it. I then downloaded it and added it to my library of stuff to check out — but it just kind of sat there for a little while. I can’t exactly say what it was that kept me from listening to the album right away, but I feel like something about the band’s name brought up some sort of negative imagery on some subconscious level. (And frankly, that’s really a shame, because — at least from what I learned by watching Bill and Ted’s Excellent Adventure — the storied emperor seems to have been quite the bad-ass, and his name should certainly evoke similarly awe-inspiring thoughts.

In any case, I ultimately overcame whatever mental roadblock had been there (the word “attalla”, I would later discover, actually derives from the Cherokee word for “mountain”) and hit PLAY on the band’s self-titled LP. And I’m really glad that I did. I wasn’t just ‘pleasantly surprised’ at what I heard; rather, the album turned out to be pretty great. I guess the lesson to be learned here was, not only should you not judge a book by its cover, but you also shouldn’t judge a book by its title being vaguely similar to another book’s title. Particularly if you’ve already pre-judged that other book to be terrible based on ITS cover. Okay, moving on.

END_OF_DOCUMENT_TOKEN_TO_BE_REPLACED 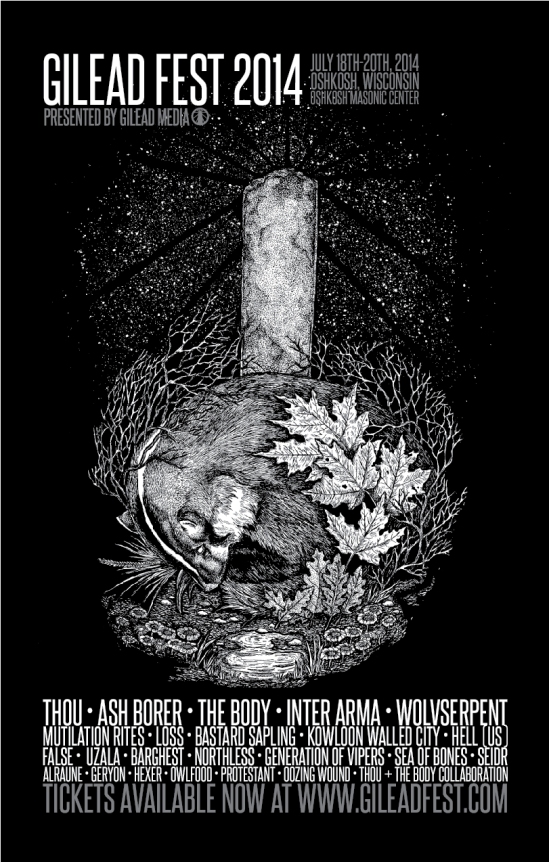 Wisconsin. America’s dairyland. The Badger State. Home of the Packers. And next weekend, the site of one of the summer’s biggest showcases of filthy, ugly, underground metal.

Gilead Media has made quite a name for itself, mostly by issuing highly sought after vinyl versions of some of the best names in bleak, black noise. And for three days (18-20 July), a huge collection of those will be converging on the city of Oshkosh. I know several people who are making the trip out there, and every year I wish I could too because they always have an incredible “no filler” line-up. This year is no exception, and I’ve got all the details for you below.

But many of the bands playing at the fest have also arranged a series of shows in various other cities on the dates before and after next weekend. Several of these will be hitting Pittsburgh over the next week or so, and chances are some of them may be coming near where you live too. I’ve got details of those tours too (at least, I’ve tried to make this as comprehensive as possible). So check it out.

END_OF_DOCUMENT_TOKEN_TO_BE_REPLACED

Question: What is a double rainbow?