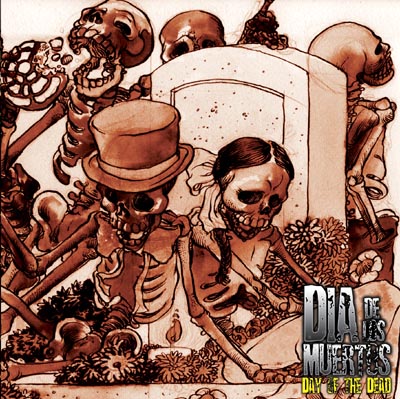 Well, Dia de los Muertos (the holiday) has come and gone, so I may be a little tardy making this announcement, but if you haven’t yet taken advantage of this opportunity, it’s still available!  So jump on it!

Dia de los Muertos (the band) announced a few days ago that they had put Dia de los Muertos (their 2005 EP) on their website for free download.  I just got around to grabbing it this morning, myself, and haven’t gotten around to listening yet, but just based on their album Satánico Dramático, which was released earlier this year, I’d strongly urge you to follow the link at the bottom of this post!

These Los Angeleno purveyors of death-thrash have incorporated a distinctively Latin-flavored groove into their metal sound, complete with Spanish lyrics and occasional classical guitar intros or outros.  Their sudamericano-style take on a classic thrashy death metal formula makes for quite an enjoyable listen; you may find yourself wishing every day were the Day of the Dead.