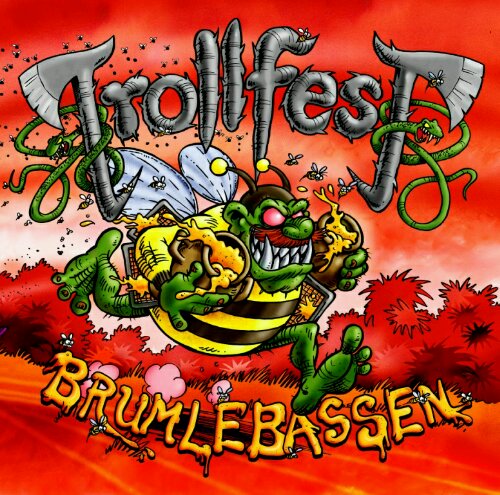 Good morning!  Tuesday’s post about the release of a new TrollfesT song attracted a lot of attention, which is great — I’m excited to hear some new music out of these guys, and I’m glad to see so many other people feel the same way.

Well, guess what!  Since then, I’ve stumbled upon a whole treasure trove of new information — including the track listing and the story behind the new album Brumlebassen (due in August from Noise Art Records) plus the cover art (see above)!  Additionally, there’s been a bit of a line-up change in the works which was just made official in advance of the band’s performance at Inferno Festival (which is taking place later today in Oslo).

So!  First things first, here is how the band describes the concept for their upcoming fifth album:

Like all TrollfesT’s albums, Brumlebassen tells a story about one of the characters that inhabit the fantastical universe created by the band.  This time the story is about Brumlebassen the Bee Keeper, whose task it is to care for the bees and brew the Honey Mead that is much loved by the Trolls.  Brumlebassen adores his bees so much that he would secretly like to become one of them himself and he is therefore depicted wearing a bee costume!

I don’t know about you, but to me a story about a troll who wants to be a bee sounds awesomely hilarious.  I can’t wait.

The tracks will be as follows:

In other news, the band has also announced that some personal commitments that conflicted with their extensive touring schedule have led to the departure of guitarist Per Spelemann (real name Per-Olav Wiik).  At the same time, they have also revealed that his permanent replacement will be St. Beinhard (real name Tor Einar Rogn).  Before confirming his new status, Beinhard has undergone “a lengthy and rigorous test drive” involving their last three shows.  Having proven his guitar and vocal skills (and, perhaps just as important, that he’s “a good drinker in the good old fashioned TrollfesT way”), the new guitarist was welcomed into the band by being presented with an official diploma and a bottle of champagne (pictured above).

St. Beinhard’s first official performance as a member of TrollfesT will be taking place in just a few hours (the band are scheduled to take the stage at Inferno Festival at about 18.15 this evening , local time), followed immediately by their tour of Europe with Korpiklaani (see dates, below).

Also joining the band for their Inferno performance today will be a special group of guest musicians known as The Devil’s Dangleberries (fun fact: this was the name originally considered before the band chose TrollfesT). As I understand it, these additional players are a collection of friends and former bandmates, including the farewell appearance of Per Spelemann.

A tour blog will be available at this location.