Here’s the latest info on Ohio’s Warriors of Metal Festival, which is being held on the 29th-30th of June this year (which is, coincidentally, the same weekend as the birthday of a certain metal blog writer/editor!) in Pataskala, Ohio (just east of Columbus). Tickets are on sale now at this location; $50 for both days or $30 for either Friday or Saturday ($40 for both or $25 each if you buy your tickets in a four-pack, and youth tickets are also discounted).

This open-air festival is now in its fifth year, and this year’s headliners include two legends of American heavy metal: Wichita’s Manilla Road and Helstar from Houston, Texas! Plus, there will be a pre-show in Columbus on Thursday night, the details of which can be found here.

UPDATE, 15 MAY 2012: I’ve just learned that the 2012 Promo Video for Warriors Of Metal Fest V Open Air has been released. The video was produced by the vocalist & guitarist of the Brazilian Thrash Metal band Machinage.

WOM Fest IV Open Air veteran Veronica Freeman of Benedictum contacted Warriors of Metal, Inc. last night with the following statement: “Benedictum will not be able to attend the WOM Festival this year. We do so regret this and want everyone to know how much we love and support Datis and his efforts and every sponsor and fan that helps to make this festival happen. Our schedule will need to remain open at that time to facilitate work on the new album and work around some tight scheduling. We wish each and every band an amazing time and each and every fan throw your fists in the air in support of this event!! Love to everyone.”

While we are saddened by this turn of events, we do understand Benedictum’s tight scheduling issues, wish them well and hope for a great 4th album from them. We are, therefore, privileged to announce that former Metal Blade and Atlantic Records recording artists Banshee (currently with Snowblind Productions) will replace Benedictum on our line-up this year. Banshee has come back together after 21 years to record their 4th album called Mindslave which is slated to be released within the next couple of months.

This will be Banshee’s very first Open Air Metalfest appearance since the release of their new album and it is interesting to note that vocalist George Call (ex-Omen) of Aska and Violent Storm will now be attending his 4th consecutive year at Warriors of Metal Fest Open Air for his 5th performance at our Fest with 3 different bands!!!

We welcome George back among our metal family as he fronts the late-80s power metallers Banshee, [and] we would like to thank Chuck Hopkins for giving us this opportunity to showcase his band at our Metalfest this year.

** Update 13 June 2012 – also via Clawhammer PR, there has been another substitution in Saturday’s line-up:

“One week ago, my brother, guitarist Jeff Scott, severely injured his right knee in a work-related accident; we tried to rehearse yesterday, but it clearly is more serious than we thought, so after seeing a specialist this morning, we regret as a band that we have to cancel all live shows planned for the near future, we appreciate all the hard work you and your organization have done,we hope the festival is a great success, this is a huge blow to the band, as we have a new album out June 12, hopefully with time the knee can be rehabilitated, as there is no band without Jeff, best of luck to all involved, we hope hope to return next year…”

We at Warriors of Metal, Inc. hope for a speedy recovery for Jeff Scott and the opportunity to showcase Forte at a later date. But for this year the festival lineup has been readjusted by the addition of the Rhode Island heavy metal band Enchanter, signed to Germany’s Pure Steel Records. We look forward to hosting Enchanter and witness[ing] all the cool new material they have been working on lately.

*** Update 22 June 2012 – once again, courtesy Clawhammer PR, here’s info about yet another substitution to the line-up:

Kansas City, Missouri, progressive power metal band Ancient Creation has had to cancel their appearance that this year’s Warriors Of Metal Fest V Open Air. According to lead vocalist, Steve Bentley, complications arising from the pregnancy of lead guitarist, Peter Nisenkier‘s wife who needs to be induced on June 29th (the first day of the festival) will effectively take the band out of the action with one of their most important members needing to be home. Bentley states: “Peter is pretty broken about having to cancel. We deeply apoligize and are sadened because we were really looking forward to [playing at the Warriors Of Metal Fest V Open Air] but [at this point] we have no choice.” We at WOM, Inc. wish Peter and his wife well and hope there are no undue compilations for the birth of their child.

Replacing Ancient Creation will be the melodic heavy metal band, Brazen Angel from Atlanta, Georgia. Brazen Angel fully impressed the Warriors Of Metal Fest organizers with their great music and high energy performance at last year’s Pathfinder Metalfest III and were invited to get on our event’s waiting list or as a prospective band for the WOM Fest VI Open Air in 2013. They had already arranged a mini-tour worth of performances on their way to Ohio to attend our festival this year as a band to support our efforts and so they made this selection an easy one for us. Band leader and gutarist Chris Cannon states: “Brazen Angel is thrilled to be spreading our melodic metal wings to the great state of Ohio, especially as the first representative from Georgia’s scene. As a part-time band that normally only takes opportunities to play for our loyal, devoted Atlanta brethren, we will be sure to make the most of this opportunity to bring some melodic, sweet-tea infused, southern born heavy metal to the fest! Don’t miss our set, we will be on our A Game! Metal For Eternity!”

PLUS!! All attendees to the WOM Fest will receive a free copy of a two-CD compilation, featuring tracks from 36 different bands (including most of the performers listed above)! 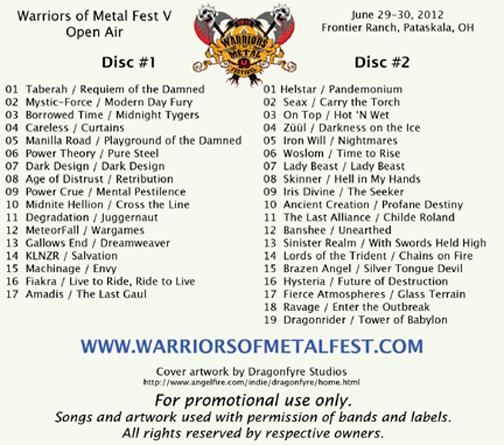 UPDATE, 15 MAY 2012: And finally, new information has also surfaced about the charitable efforts associated with this year’s festival:

Since Warriors of Metal, Inc. is a registered non-profit organization in the state of Ohio and we are dedicated to education and proliferation of Metal music as well as charitable service to our greater Metal family and community, we would like to announce that for this year’s charity project we will be collecting money at the festival to donate to our Metal brother, Brian Bond who plays in the Thursday, June 28th Pre-Fest Showcase band KLNZR. Brian recently lost his home to a fire and although everybody in the family is fine, they did lose some pets in the process of trying to escape the blaze. Brian and his family are in temporary housing now and we will be making a collection during the Fest to help them out.

Additionally, our friend, Fabio Delibo of the Brazilian Thrash Metal band, Machinage, has stated “We from Machinage are very saddened to hear about Brian Bond’s home having been destroyed in a fire, and since we can’t help just by our hands, we are willing to try to collect as much money as we can in all the gigs we are going to play in our month long US Tour this summer in order to help Brian and his family.” The 2012 Machinage US Tour starts at Worcester, Massachusetts, goes as far north as Burlington, Vermont, as far south as New Orleans, Louisiana, and as far west as Kansas City, Missouri. We at Warriors of Metal, Inc. applaud Machinage’s pledge and shall do our best to help them raise even more money for the Bond family and this worthy cause during our 5th year anniversary show this summer.