Hello, readers.  To be honest with you, as much as I’ve bitched and moaned about the workdays dragging by, I really can’t believe it’s already Monday again!  This weekend went by far too quickly, but not only that, it hardly feels like last Monday was a whole week ago.  I’m guessing this is because school is just about wrapping up for this semester (only one more week to go!) and I’m trying to make sure everything is caught up and turned in before the deadline, and so it is starting to feel like days are slipping away from me.  But enough about that, like I said, it’s Monday, and you all know what that means!  It’s time for the “Signmeto” Unsigned Band of the Week!  As you know, this is the thing where I go to the “Sign Me to Roadrunner Records” website and check out the messages that bands have written to me asking for a review of their music.  Then I grab one of those bands, listen to the songs they’ve got posted, then I write about them here so YOU can discover some awesome new music.

Today I’m looking at a solo artist from Dorchester, in the southern part of England, whose name is Jamie Parker.  He says the three songs currently included on his Signmeto page are just demo tracks that will soon be re-recorded with a new full band line-up, but they sound pretty fully realized to me.  I like where things seem to be going with this project so far, and if you like your stoner rock on the heavier end of the spectrum, then you’ll probably dig it as well. 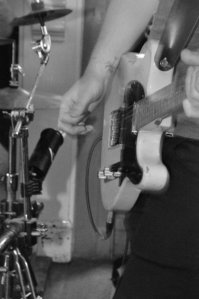 The first song here is called “Locked in Your Room,” and right off the bat the heavy riffs that switch back and forth between different rhythms and time signatures, plus the unison vocals that enter soon after, bring to my mind a strong Queens of the Stone Age comparison.  Admittedly, I’m not all that familiar with that band — with the exception of a couple songs they’ve had on different editions of the Guitar Hero video games, plus that song they played on Saturday Night Live where Will Farrell came out playing the cowbell in his outfit from the “Don’t Fear the Reaper” sketch.  But, from the little bit I do know about that band, I’d say they do have pretty decent, well-written stuff, and so any parallels I make here are meant in a totally complimentary way.

Next, a song called “Turn Away” starts out pretty soft and mellow, with plenty of minor chords, and again those almost-deadpanned unison vocals.  This goes on for a short time before the drums jump in and the song totally starts rocking — I know tons of bands have used contrasting dynamics like this, but I always like it when it’s done well.  The low-energy, minimalistic stuff at the beginning of the song, and the way the vocals and guitar have that just-almost-but-not-quite-all-the-way-out-of-tune quality to them makes me think of some similarly-structured songs by the band Dig.

At nearly six minutes in duration, by far the longest track included here is “Anything Else (What’s Left).”  Opening up with some bouncing rhythms that again evoke thoughts of QotSA, but after about two minutes in, things take a far more progressive leap, incorporating some echoey slide guitar parts hovering over top of a repetitive arpeggio that almost reminds me of the one underneath the guitar solo toward the end of “Don’t Fear the Reaper” (by some incredible coincidence!); this goes through a few different twists and turns, with the lead guitar part coming across as almost acid-psychedelic for a short time, before fading away into nowhere.

That’s all he’s got on here, but if you dig what you’ve heard so far, check out Jamie’s Soundcloud (see link below), because there are more tracks there!