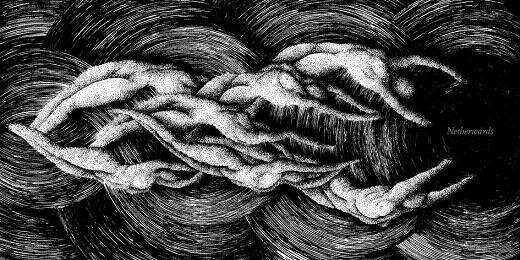 First of all, the band name itself refers to a person who suffers from anhedonia, which is a psychological disorder in which the pleasure sensors in the brain get all screwy, resulting in an individual who no longer gets any enjoyment out of pleasurable activities. As you can imagine, this is a condition that’s closely related to clinical depression, as well as schiziophrenia and many other emotional disorders. Basically, we’re talking about a near-total absence of any joy here.

Just like any other funeral doom, this is not music for the impatient. In fact, it takes well over a full minute just for the distant rumbling sound that opens the album to become fully audible. But once it does, just like when you see slowly-gathering dark clouds, you can immediately feel that a heavy storm is on its way. Then, when it does start coming down, this is no typical April shower; it’s with the full force of a monsoon. Nor is this the type of downpour where it seems the sky has simply split open and dropped everything it had in a single instant, only to clear up and allow the sun to emerge mere moments later. No, heavy and oppressive though it may be, this is a much slower and more drawn-out onslaught, as described in the Bradbury story “The Long Rain”:

The rain continued. It was a hard rain, a perpetual rain, a sweating and steaming rain; it was a mizzle, a downpour, a fountain, a whipping at the eyes, an undertow at the ankles; it was a rain to drown all rains and the memory of rains. It came by the pound and the ton, it hacked at the jungle and cut the trees like scissors and shaved the grass and tunneled the soil and molted the bushes. It shrank men’s hands into the hands of wrinkled apes; it rained a solid glassy rain, and it never stopped.

Later in that same story, one of the characters — which, by the way, were people who were suffering the imagined atmospheric conditions on Venus — compared the unceasing storm with a form of Chinese water torture, more for its similarity in the psychological effect it had on those who had to endure it, than for a parallel between the actual techniques. They say in the Chinese water torture, it isn’t the actual water dripping on your head that’s the problem; rather, it’s the interval between the drops. Apparently you slowly drive yourself crazy waiting for the next one to come. In contrast, the torrents of rain on Venus (in the story, anyway) are enough to dull the senses and drive people to insanity through the constant sound as well as the way the physical drops incessently hammer away at your body.

Well, over the course of its four tracks (averaging about ten minutes apiece), Netherwards sonically approximates both of these forms of torment: the nonstop onslaught of pulverizing doom/death riffing with the accompanying bassy growl, interspersed with dirgey funeral doom slowness and an agonized howl of pure madness. In other words, the best of both worlds!

Here’s a little preview of the album: listen to the opening track, “Saturnine,” via Soundcloud (courtesy of Axes to Grind)!
http://w.soundcloud.com/player/?url=http://api.soundcloud.com/tracks/43725852&show_artwork=true&secret_token=s-pGeFh

Then, read an interview with Anhedonist, and listen to an exclusive stream of track two, “Estrangement,” here via Brooklyn Vegan.

Finally, grab the Netherwards CD from Dark Descent here, or for those who prefer, download the album from Amazon here