Hi there.  It’s been a few weeks since I’ve done one of these “What To Do In Pittsburgh” features, but there are a couple interesting events coming up this Saturday (12 May) that I’d like to bring to your attention.  For the record, if you work for a local promotion company, a venue, or a band, I can only write about the shows that I know about!  So get in touch with me if you’ve got something you want to share. 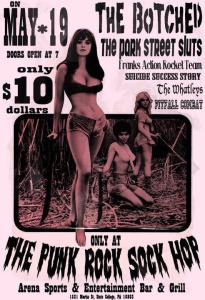 First off, how crazy is this, I’m going to tell you about an event that is neither in Pittsburgh, nor this weekend!  The annual party known as The Punk Rock Sock Hop will be taking place next Saturday (19 May) at the Arena Sports & Entertainment Bar & Grill in State College.  That’s only a couple hours outside of town — not a bad drive to catch a great show, I’ve done it plenty of times — and it’ll feature some great local talent.  A spendid time is guaranteed for all.

I’ll be going into more detail about this event in a post next week, but if you think you might be interested in going, you might want to start investigating it now, because they’ve put together a little game where you can win free tickets!

All you need to do is to post this image (that’s the poster that’s shown here) on Facebook three times between now and this Saturday (12 May), making sure that you tag the Thepunkrock Sockhop Facebook profile each time you share it.  Also, if you plan on participating, be sure to leave a comment on the Facebook event page about the contest so that they know you’ll be sharing/tagging the photo.  Two winners will receive one free admission ticket apiece, and one grand prize winner will get a pair of tickets for free!  The winners will be announced on Facebook, but also revealed at the Atomic Pre-Hop, which is a pre-Sock Hop party happening this Saturday (12 May)! 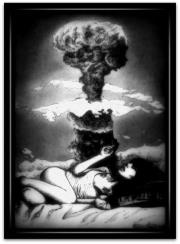 … which, naturally, brings us to the discussion of The Atomic Pre-Hop! 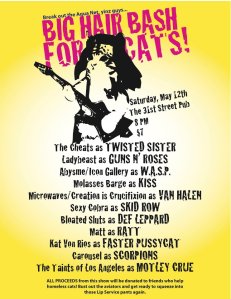 The Big Hair Bash for Cats!

21+ only, $7 cover, all proceeds will be donated to help homeless cats in the Pittsburgh area!

Now, don’t let me hear anybody say they don’t have anything to do!

One response to “Upcoming Shows: What To Do In Pittsburgh This Weekend (12 May 2012)”