If you spend any amount of time poking around this blog (and I highly encourage you to do so!), you’ll quickly notice that I have a fairly broad range of musical taste. Most of the stuff that I listen to would be classified under some metal genre or other, although not all of it. Everything else would usually fall into one or more categories of punk, hardcore, hard rock, or pretty much anything that’s heavy, but once again, you still couldn’t fit all that I listen to in such neat little boxes. Even just looking at the metal music, you’d find me all over the spectrum there as well, touching upon (at least to some degree) practically every subgenre ever invented.

However, one recurring theme you might discover, is that I’ve always had a certain affinity towards the sludgey, the grimey, the filthy, and in particular, the mind-numbingly slow. If it sounds like it was recorded with an hourglass instead of a metronome, chances are I’ll be all over it like zombies attacking a MENSA convention.

So naturally, when I first discovered Oxfordshire’s Undersmile (courtesy of American Aftermath including one of their songs on last summer’s Summer of Sludge compilation), I instantly fell in love, because they just totally hit all the right buttons for me.

Late last year when I heard the news that they were in the process of recording their debut full-length album, I was delighted, and later, when more details and some preview tracks started to emerge, I got even more excited.

Did you ever have something you were anticipating so much that you almost felt nervous about whether it would ultimately live up to the hype? Even if it turns out to be really really good, could it possibly be as good as you were expecting? Or even worse, what if the thing you were so convinced was going to be amazing — and that you’ve been telling everyone around you how amazing you think it’ll be — turns out to be terrible? Of course, you wouldn’t be looking forward to something that much without having some prior knowledge or some sort of basis on which to establish those expectations, so there’s a very small chance that it would, in fact, be awful — but there’s still that remote possibility. Isn’t that just nerve-wracking?

Well now that I’ve gotten my copy of Undersmile’s Narwhal and listened to it a few times, I’ve discovered that I didn’t even know the meaning of the words “terrible” or “awful”… 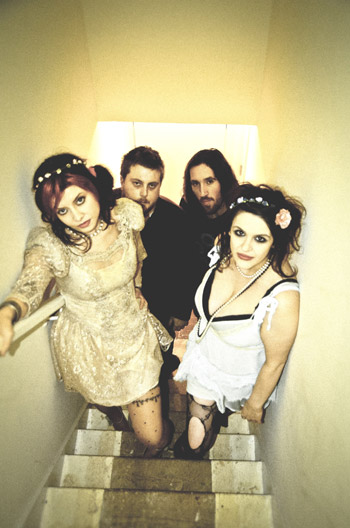 In the English language, both “terrible” and “awful” have come to be associated with the idea of being “extremely bad” — in fact, that’s the first definition given for each word by the dictionary I consulted. Nevertheless, “terrible” originally signified “inspiring terror, awe, or great fear”; likewise, “awful” used to be more associated with “inspiring fear, dreadful.” However, the original meaning of that word was “impressive, inspiring awe” — quite a long way from its current connotation. Somewhere along the line, “awesome” had replaced “awful” in common usage, despite the fact that they had started out as synonyms; nowadays “awful” usually refers to something that’s just bad, while “awesome” also has evolved somewhat — instead of strictly describing something worthy of awe and admiration, “awesome” is more often used as a replacement for “good.”

For that reason, I find myself struggling for the words to describe this album. Since “awesome” has gotten to be so overused that it no longer has the effect it once did, and since “terrible” and “awful” have both come to imply something different, I need to find a different way to communicate how I really feel about what I am hearing. In its entirety (which is absolutely the best way to appreciate this particular work of art), Narwhal is definitely impressive, both awe-inspiring and dreadful.

Thinking about this reminds me of something I learned when I was very young: the word “dinosaur” came from the Greek for “terrible lizard” — and in that context, “terrible” is clearly intended in its original meaning, rather than the more contemporary definition. So I decided to play with Google Translate for a while. I discovered that if you break apart the Greek word δεινόσαυρος (“dinosaur”) into its components δεινό and σαυρος, this phrase translates to “evil lizard,” although the word δεινό by itself means “formidable” in English.

At that point, I pretty much just gave up.

If you’ve heard either of the band’s prior releases — their first EP or the more recent split with Caretaker (both of which are also available on Bandcamp, by the way) — then you’ll have some small idea what to expect: crunchy guitars, feedback, misery, rumbly bass, minimal drumming, dreary vocals that nearly sound entirely lifeless.

Yes, you’ll find all of that here, but it’s all been amplified to an exponentially higher degree. The guitar and bass riffs stomp all over your ears like some atomically-enhanced “evil lizard” strolling down the streets of your city.

The drumming is very thunderous, yet very deliberately done. One of my favorite parts of the album would be the intro and outro to “Qaanaaq” (which is named for a small settlement in northern Greenland, where, by the way, the native population often hunt narwhals). The song starts out quite haltingly, with the guitars and vocals following the rhythms on the drums, all of it punctuated frequently by sudden silences. Perhaps taking a cue from its palindromic title, the song’s ending mirrors its beginning, but throughout the duration in between, the whole band comes across sounding very oppressive and all-encompassing (like an arctic winter, or perhaps representative of the ocean so frequently referred to in the lyrics).

It’s difficult to pick out highlights from the ten tracks included here (which vary greatly in length: four long songs, ranging between 12-16 minutes; three medium, between about 6-8 minutes; and three brief snippets of interlude or outro, around two minutes apiece) — as I said before, this album is definitely better appreciated as a whole. But I understand that committing yourself to wading through its entire 82 minutes can be quite an undertaking. So for your benefit, I will note a few of the more memorable passages, in case you are looking for samples to help decide whether to invest in this album or not.

I’ve already mentioned “Qaanaaq,” and if you saw my last post about this album you may have already heard “Lockjaw” (which was being streamed by The Sleeping Shaman) and “Verdigris” (which is streamable or downloadable as part of the Grip of Delusion Radio compilation I had written about).

The opening of “Verdigris” shows an interesting side of the band’s dual frontwomen (guitarists Hel Sterne and Taz Corona-Brown): they frequently use a fairly deadpan vocal delivery, practically expressionless, and dissonant and aharmonious when the two combine; however, in this particular moment they seem almost melodic. Additionally, these surprising hints of pleasant-sounding harmony creep into a few other moments throughout the album: thrice near the middle of “Milk” one of the ladies is singing a particular note but then bends ever-so-slightly to a different pitch, producing what almost seems like a (heretofore unheard of) major-key interval.

Furthermore, there is a sort of lovely harmony that occurs about a quarter of the way through “Myra” — and then again somewhere past the three-quarter mark — although both times this leads straight into expressions of incredible suffering and anguish. (The second time this happens, the screams are so blood-curdling, it’s likely to make one wonder whether they had been induced by actual physical pain.

The vocal parts — discordant and aharmonious though they may be — often give the impression of having a third or fourth part added in, making me wonder whether the gentlemen of the band (bassist Olly Corona-Brown and drummer Tom McKibbin) might have contributed some uncredited additional vocals in certain places, or if the others were perhaps just overdubbed. In any case, the layers of voices often can build to the point where they threaten to overwhelm the listener with fright — such as some of the instances of yelling that take place in “Mandrill,” particularly right at the end of the song.

Which brings me back to my original point: Narwhal could absolutely be considered a terrible, awful, and awesome album — but regardless of what you want to call it, it’s quite an impressive and imposing work that deserves, and demands, your attention.

Listen to the album via this Bandcamp widget, where you can also purchase a digital download, but you might also wish to consider picking up the CD if for no other reason than the incredible artwork (see the Undersmile or Future Noise webstores, below).