So tomorrow is the day when we’ll be making the trek west to Ohio, because Agalloch‘s tour will be hitting Cleveland. (Read all the details of that tour right here. I’ve been pretty excited about this for a while — I may only have discovered the band within the past few years, but quickly I found their style of vast, atmosphere-infused black/folk metal to be right up my alley. I enjoyed all the songs I’d heard (on Pandora or wherever) from their earlier albums like The Mantle and Ashes Against the Grain, so I thought I had a general idea of what this band was about, and I thought I knew basically what to expect from the upcoming show.

But no, honestly I don’t think anything could have prepared me for what happened when — partly out of curiosity, partly to get familiar with some of their newer stuff — I headed over to the Agalloch Bandcamp page and hit PLAY on their recently-released album The Serpent & the Sphere. I found myself instantly blown away by what I was hearing, a reaction that continued throughout the next fifty-nine minutes or so, through the conclusion of all nine tracks. I decided right then, even though this year isn’t even halfway over yet, that I find it unlikely I’ll hear anything better than this in 2014.

I hadn’t even really planned on writing this, but this was just one of those rare occasions where something caught my attention and spoke to me so much, I felt like I had to make sure other people knew about this record too. 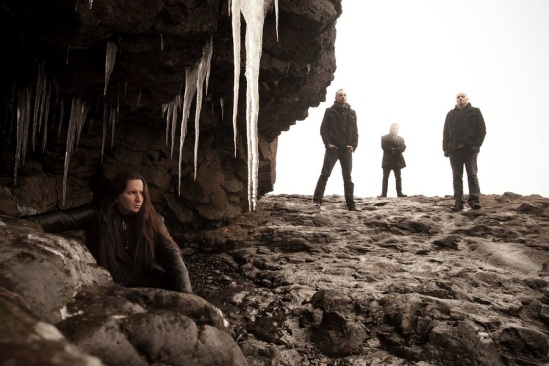 “The serpent” in this album’s title refers to the constellation Serpens, which is actually made up of two separate groups of stars (Serpens Caput and Serpens Cauda, “serpent head” and “serpent tail” respectively). Its middle is obscured from view by another constellation, Ophiuchus (“the serpent-bearer”) which is depicted as a person grasping the snake in both hands as it wraps itself around his waist.

In the right (head) side of the constellation is its brightest star, officially Alpha Serpentis, but more commonly known as Unukalhai (from the Arabic for “serpent’s neck”), or Cor Serpentis (“heart of the serpent”). Also of interest, within the left (tail) side is the Eagle Nebula, a star-producing region most famous for being the source of the Hubble Telescope image known as “Pillars of Creation.”

Which brings us back to Agalloch and The Serpent & the Sphere. While the huge gas columns of stellar matter in the nebula are a pretty awesome sight, and the formation of new stars out of space dust is a rather lofty concept to wrap one’s head around, the music found here strives to represent something even greater: the opening track is called “Birth and Death of the Pillars of Creation” — thus implying that here we have the sonic imagery of not just the creation of stars themselves, but stepping back to a grander scale, the creation and eventual demise of the system where all of those stars come from.

Exceeding ten minutes in length, over half of which goes by before any vocals begin, “Birth and Death” does indeed manage to portray something of the epic scale its title promises. After setting a foundation of suspense with a minute or so of guitar notes that very gradually build in intensity, some huge chords and thunderous drums appear out of nowhere. That enormous drum sound — as though it was recorded in a Colosseum-sized studio — is one of the more impressive parts of this album; it’s also especially striking in a galloping wardrum-like part in the latter half of “Dark Matter Gods” (and a similar style repeated into the intro and outro of “Celestial Effigy”), as well as the last few minutes of the penultimate track “Plateau of the Ages.”

Besides the drum sound, this album includes an immense number of layers, between the guitars and bass, acoustic and classical guitars, harsh-whisper vocals, and occasional background of choir vocals. The sum of all these parts is nothing short of impressive — and in fact, on first listen I was so taken with the epic nature of the sound achieved here as well as the clarity of the individual parts, I found myself wondering who had mixed this material. That isn’t really something I usually would be too concerned with, but here I had to recognize a job well done; it turns out, the recording and mixing were both done by “producer / engine ear” Billy Anderson.

Even the songs here that are in a more traditional black metal style (e.g. “The Astral Dialogue,” “Celestial Effigy”) are infused with tons of atmosphere; “Dark Matter Gods” starts out sounding like ethereal post-metal (including a cool, though brief, heartbeat-sounding drum part in the introduction) and then developing into more of a blackgazey wall of sound; and “Vales Beyond Dimension” demonstrates an epic “dark metal” (for lack of a better term) style.

These tracks are interspersed with a trio of three-minute classical guitar interludes — which were composed and performed by Musk Ox‘s Nathanaël Larochette — “Serpens Caput” and “Serpens Cauda” at either end of the album feature the guitarist accompanied by the sound of winds across a vast open plain, while “Cor Serpentis (the Sphere)” nearer the center of the album consists of guitar only.

In my opinion, the real highlights of this album — although it’s pretty amazing from top to bottom — are the two longest tracks, “Birth and Death” and the 12+ minute instrumental “Plateau” (which each appear before the first and last interlude). Structurally fascinating, and with endless layers of sounds — including the acoustic guitars and choirs and huge reverby drums I mentioned earlier — I don’t actually feel that writing about these songs could do them any real justice. But again, overall this looks like a serious contender for album of the year honors, and I’d highly recommend you check it out.

You can hear The Serpent & the Sphere at Bandcamp (below); buy it here.