Hello out there, and Happy Monday everyone! My original plan was for this review to be published last Friday, but that was the 4th of July, aka Independence Day, which is the American holiday commemorating the time when some folks who lived here decided to send a letter to England saying they wanted to get a divorce. And I realized that it would be very un-patriotic of me to finish writing this on that date. Not because it’s about a British band, but because it would have involved actually doing something productive on a day off from work. In this country, we take our leisure time very seriously. But now it’s Monday and time to jump right back in. So here’s Beholden to Nothing and No One, a massive 80+ minute collection of post-metal/ambient music (spanning two CDs) by Leodensian band Sunwølf. 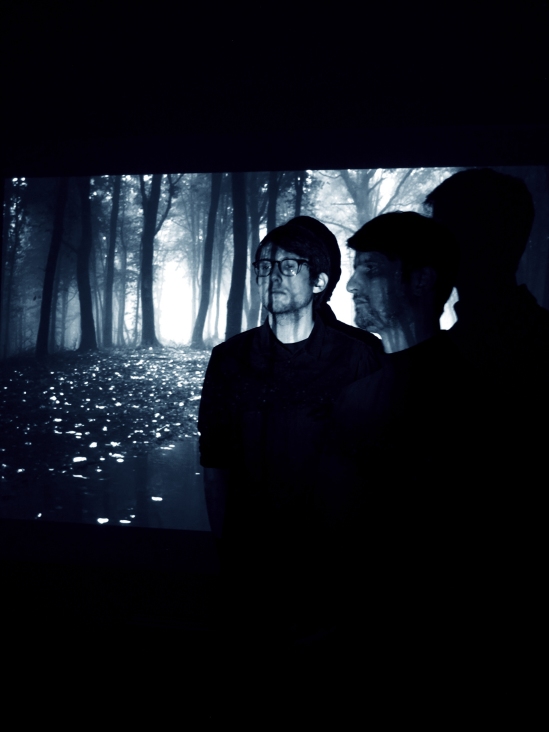 The first disc (or, the first eight of these fourteen tracks, if one is dealing with the digital version) features some rather moody, ambient material that spans from post-metal to sludge to shoegaze. The influence of bands like Neurosis and Isis is clear, particularly in the meandering structures of songs like the title track (which starts out rather minimally with a single clean guitar part and a touch of synths lending a bit of atmosphere, leading into a bluesy full band part — still fairly slow and minimal — which ultimately evolves into a thicker, multi-layered shoegazey sound); and also in the pair of tracks that bookend this first half of the album: “In the Darkened River I Found the Silence Loom” (whose moody post-metal sound builds slowly over its 7+ minutes — continually flirting with the idea of exploding into a heavy, distorted sludgefest but never quite hitting that plateau before it suddenly and unexpectedly dies away) and “Heathen’s Rest” (which builds even more slowly, starting from an ultra-minimal guitar intro that lasts almost the whole first three minutes, then adding some very minimal drumming as well; while the guitar does increase in complexity and intensity a bit, it also gets somewhat more melodic — slow, smooth, and mellow are the primary moods here, but this one does eventually reach a point of cranking up the heaviness, over the course of about the final 3-1/2 minutes).

In addition to Neurosis/Isis comparisons (most of the in-between songs feature plenty of distortion; slow, sludgy, chuggy riffs; heavy drumming; and gruff, bellowed vocals in the style of The Melvins or Harvey Milk), Sunwølf also incorporate a variety of other elements that may appeal to fans of some of those bands’ close friends, like Amber Asylum (for example in the strings — a viola or two, it sounds like — incorporated into the opening track, as well as the female vocals featured in this and the last song) or 27 (particularly in the minimalist arrangement of the guitar and drum parts in songs like “The Widow’s Oil”) And while we’re at it, “Thrown Into a Nameless Time” is another interesting highlight with its slow, low-pitched, distorty, bendy notes, but also particularly for its use of a sort of deadpan harmonized singing style (reminding me of Undersmile, except with all male vocals).

The second set of songs here are clearly done by the same band and unquestionably fit nicely on the same album — the dark, atmospheric mood is very similar from the first half to this one — but here they have abandoned all semblance of metal (post- or otherwise), leaving only the gloomy ambience in its place. Also largely absent here are vocals (excluding a bit of spoken word that makes an appearance on the first track “Twelve Sunne” and some monastic chant-singing throughout “Lotus Island”) or drums (not counting the occasional cymbal roll or the jazzy bit of hi-hat that accompanies the guitar-trumpet-saxophone trio of “Symptoms of Dearth”), leaving primarily bassy synth-pads, reverby guitars, and subtle hints of feedback and other random noise elements to formulate these dreamy soundscapes. Plus a soft, minor-key piano part that comprises the ethereal, understated closing track “Of Darknesse” — which after a few minutes just fades away into the mist like a candle extinguished once it has melted away to nothingness.

You can have the opportunity to immerse yourself in both halves of Beholden to Nothing and No One by using the Bandcamp widget (below). Then, you can buy it here, or order the limited edition CD version here.