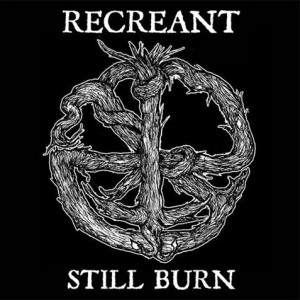 Until sometime last summer, there used to be a house out in the Lawrenceville neighborhood of Pittsburgh. Well, actually I suppose the house is still there. But previously it had been the home of a couple friends, who (at the time) had been members of a few local bands including Cerebral Apophysis and Old Man of the Mountain. This little urban bungalow was referred to as the Gopher Hole, and it was here (specifically, in one small room which adjoined the kitchen) that a great many DIY shows were held, which featured a huge assortment of local and nationally touring bands.

At one such event, back in April 2013, my wife and I had dropped by to see local hardcore sensation Meth Quarry, and we also got to check out the grindy-screamy bass/drums duo Shiff. Later that evening a band from Florida, whom I’d never heard before, called Recreant was supposed to play, but unfortunately we had a prior engagement and had to leave the show early. While we were there, though, we briefly met some of the members of the touring band, who seemed like really nice people. Half based on that, half based the fact that it had some really sweet artwork, we decided to buy a copy of the record they had for sale. The idea was, it’s nice to help out bands on tour — especially when they’re playing a free DIY show — and if it wasn’t very good, well, we know enough people who collect vinyl and surely we could find a good home for it.

Well. The next day I took that LP with its Crass-inspired logo out of the sleeve (it turns out, it was housed in a recycled old album cover which had been turned outside-in, re-glued, and with the band’s artwork screenprinted on the new blank front), and decided to give it a spin. As I recall, it took less than twenty seconds to realize there would be no need to worry about finding someone else to adopt the record: this was some pretty incredible stuff. (You can check it out right here.)

So anyway, fast forward a bit, and now earlier this month, the band has just put out another record — this one through the Halo of Flies label. It’s awesome, too. They’re on the road again, in the middle of a huge cross-country tour. For months I’ve been looking forward to their return to Pittsburgh (which will be tomorrow night!), but I’ve got the full list of remaining dates here. I’ll share them with you after I talk a little bit more about the new album Still Burn. 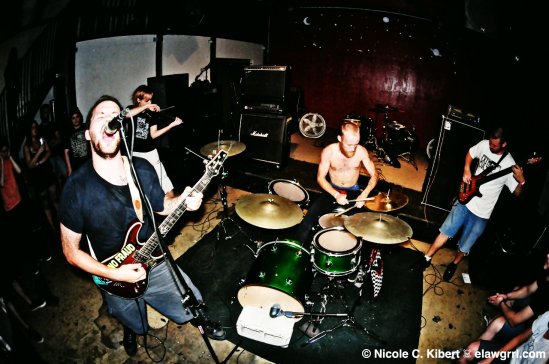 Like its self-titled predecessor, this new record is a beautiful example of expertly executed atmospheric post-hardcore/crust (particularly in the opening track “The Spectacle” and throughout much of “Silent Plague, Secret Trauma”) — with plenty of lovely, mournful minor-key violin countermelodies adding extra texture and flavor. They’ve added another vocalist since then, but the screamed — powerviolence-esque — vocals have not lost a bit of the anger and vitriol that was present before.

Nor have the band’s lyrics become any less politically-charged, or their messages any less activistic. Whereas the previous album seemed to be primarily involved with speaking out against the evils inherent in modern organized religion (which also fit with its title), there is no mistaking the fact that this latest release centers around rape and sexual assault, and in particular that it focuses on the widespread existence of apologeticism and the all-too-frequent occurrence of everyone seeming to systemically turn a blind eye.

In addition to messages included on the band’s social media sites, the lyrics to this album are very clear — from references to specific events (such as in “United States of Steubenville” and “Still Burn (for Aisha Ibrahim Duhulow)“) to general descriptions of traumatic occurrences and condemnations of society’s lack of response to them, and condemnations of society itself, with its emphasis on false expectations for body image, and plenty more.

But I’ll let you peruse those lyrics yourself; the band puts its message out there much more eloquently than I could paraphrase it here. And delivered in such a scathing tone, set against such fragile, almost dulcet tones. I’d highly suggest you go check out Still Burn at Bandcamp (see below) and then grab a copy of the record from the band when they come to a city near you (see list further below)! If you’re too impatient to wait (or if you live somewhere else), you can always buy from Halo of Flies instead.