A lot of times when I write about a band, you may have noticed I will include some kind of anecdote about how I first heard about them — whether I’d seen them perform live at some point, or sometimes it’s someone I get introduced to through another website or another band. But the vast majority of the stuff I have here to write about came to me as the result of being contacted by either the band themselves, or their record label, or the PR person who represents the band or label. I get a TON of stuff emailed to me — seriously — and it can sometimes be a bit taxing to sort through it all. But in the end it’s completely worth it, because I’ve discovered some amazing stuff this way that might not have come to my attention otherwise. In fact, some of the bands I would consider to be among my favorites to listen to (not even exaggerating) were ones I had never heard of until I’d been contacted by their label or PR company.

For this reason, I make it a point to listen to absolutely everything that anyone sends me. Because there’s no way of knowing whether something might end up surprising me and being awesome. In fact, I go into every new album with as little knowledge as possible, and with the hopes that it’ll be something that completely blows me away. Of course, this leaves me feeling pretty disappointed much of the time, but occasionally I come across some real gems. When I do, that’s when I generally will go back to the original email (and then Facebook or Bandcamp or the band’s own website, wherever they have some sort of online presence) to learn more about the band — such as where they’re from and a whatever history I can learn about them.

This is sort of what happened when I first heard Black Tar Prophet‘s new album Deafen, which came out earlier this year. When I started listening, I knew nothing about the band other than their name, but before I reached the end of the first song, I was already rushing back to find that email, to see where these guys were located — and not just from curiosity. This time, I needed to know how close to here (Pittsburgh) they lived, so I could gauge the chances of them ever playing in this area. Once I found out they were from relatively nearby (Tennessee, which is just three states away, or about 8-9 hours driving), I immediately started considering the possibility that they could someday be on tour somewhere in this direction, and furthermore I decided that if this happened, I needed to get them a show here in town, and that my own band Last should open for them.

Well… I’m very excited to tell you that in just a couple of weeks, both of those things will be coming true! This instrumental heavy sludge/noise duo will be hitting the road in October, and I’ll include all the details about that right after I’ve told you some more about this album that had piqued my interest so much when I first heard it… 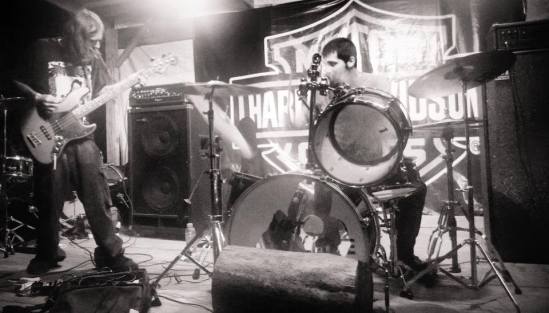 Beginning and ending on the same sustained, distorted bass note (although in the final seconds of the album this dissipates into a harmonic hum), Deafen is thirty-some minutes of relentless crunch, sludge, crackle, and fuzz — courtesy of Greg Swinehart‘s bass — accompanied (and, to some degree, corralled into some semblance of order) by the pounding and crashing of drummer Erik Dever. This near-continuous wall of doomy noise is broken into nine tracks, ranging from the second and second-to-last (“Judgement Whore” and “Let the Cold Winds Blow”), which are each under two minutes long, to the epic central song “Back on the Nod” which breaks the nine-minute mark. Actually — although this was probably purely coincidental — it’s interesting to note that the album is constructed almost palindromically in terms of track length: the first and last (“Dethroned” and “Condemned”) are each a little over four minutes long; the other four tracks (numbers 3, 4, 6, and 7) sandwiched between the two shortest and the longest all fall into the 2-4 minute range. Okay, maybe I lied, it isn’t really that interesting, but I just thought I’d share that observation.

Anyway, regardless of length, all nine songs are stuffed full of devastating down-tuned, down-tempo riffs; the kind that trudge slowly along (as if marching through hot black tar, natch), and then suddenly hit the brakes for an even slower section where every fuzz-laden note is accented like a punch to the chest. This is especially noticeable in the centerpiece “Back on the Nod,” which goes trucking along nicely for the first six minutes or so, until the song just slips off the edge into something like a bottomless chasm of ultra-doom, gradually sinking deeper into thick sludginess.

With song titles highly appropriate to the overall sound of the album (including “Bottom Feeder,” “Ring of Buzzards,” and, of course, “Stoned to Death”), Deafen is sure to appeal to fans of all things fuzzed-out, trippy, and “slow and low.” The pitch seems to waver ever-so-slightly in and out of tune throughout much of the album, reminiscent of the effect of listening to a worn old cassette tape — this collage of sound could be the perfect accompaniment to an altered state of mind, or perhaps a very good approximation of such a condition.

Listen to this crushing slab of doom at Bandcamp (below), and then buy a copy from the band when they come to a city near you (details further below) if possible, or just go here.