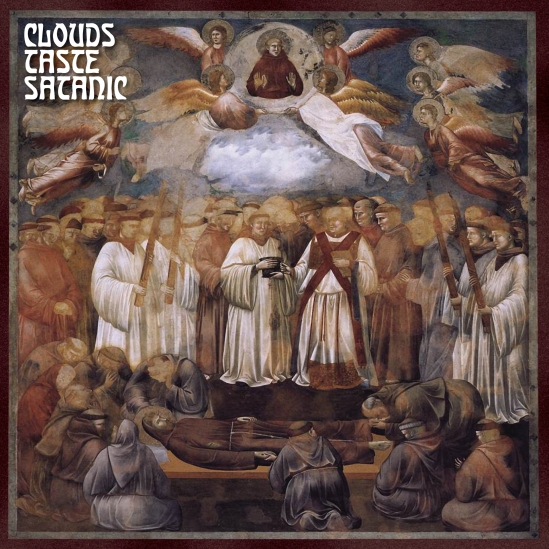 Clouds Taste Satanic – To Sleep Beyond the Earth (Kinda Like Music, 01 May 2014) 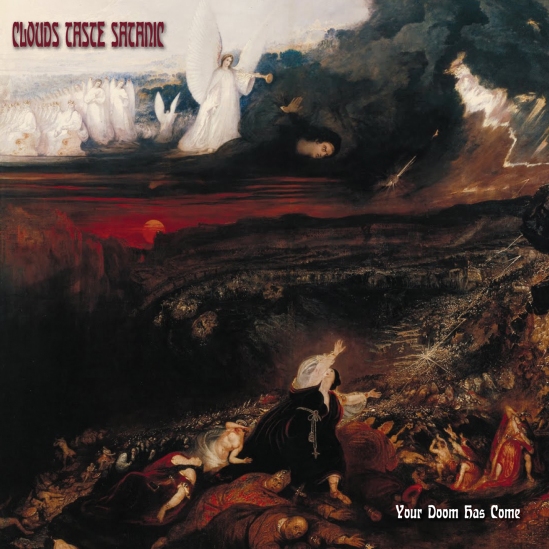 Well as I had predicted, I didn’t manage to get any writing done yesterday. I still don’t know if I’m fully recovered from the night before last, but in any case, here we are. I will just say this: it was totally a surreal experience, and if you happen to live near any of this tour‘s few remaining stops, or if either of these bands should come anywhere near you in the future, DO NOT miss the opportunity. Seriously.

So anyway, speaking of things that are surreal, today I’d like to talk to you about a pair of albums that have been released over the past two years by my all-time favorite band-whose-name-was-adapted-from-the-title-of-my-second-all-time-favorite-Flaming-Lips-album, namely, Brooklynite instrumental doom ensemble Clouds Taste Satanic.

It’s no coincidence that this band’s debut album To Sleep Beyond the Earth includes two other bands’ names in the title. Like the former’s monumental hour-long swan song, this album is filled with a single piece of music made up of repeated riffs and slowly developing themes; like the latter’s best material, there are no words to get in the way here, just introspective and transportive music.

Theoretically divided into four different sections, though actually physically divided into two (each of which are approximately the length of one side of a standard LP), “To Sleep Beyond the Earth” opens with some drawn-out, sustained, droney chords colored with a healthy amount of overdrive; giving the atmosphere a somewhat sinister tone is the occasional inclusion of a sound like the church bell from the intro to “Black Sabbath,” just a much larger (and hence heavier and deeper-sounding) one, heard from like fifty miles away. This section lasts for about three minutes before giving way to a (also rather slow) doomy riff, but the droney opening part returns no more than a minute later. These sections repeat, for roughly the same duration as before — Clouds Taste Satanic‘s brilliant idea is not to linger any longer than necessary on a particular bit, so as to keep the listener engaged more than one might expect over the entire duration of the album.

In the same way, alternating with returning to the initial theme, the band continues to introduce new riffs or variations on existing ones. Some may be slightly faster or more complex than others; some may be powerful and clean like Candlemass while others may be a touch rougher and fuzzier (in a Cathedral sort of way, never to the extent of Electric Wizard, for example). Without vocals to add a bit of melody and another dynamic level beyond the single or twin-guitar riffs, many of these sections add additional interest with short solo or lead guitar sections — this is especially true in the oft-recurring sustained chords part, with the guitar leads interweaving with the chord changes and the striking of the bell.

The second half of the album (indicated as “Parts III and IV”) opens on a rather slow introductory riff (not too dissimilar to one of the earlier ones from the first half), which similarly keeps reappearing in between other new parts that appear a couple minutes at a time, at least for about the first ten minutes (let’s go ahead and assume that this comprises “Part III”); after this point, the main section from the very beginning makes a re-entry, and again this section alternates with some other brand new riffs. When the drone/sustain bit comes back each time, it feels much more ponderous and full of gravitas, right up through the final few minutes when it devolves into a short exclamation of feedback and fades (mirroring the ending of “Part II”).

In the press release for follow-up album Your Doom has Come, it’s implied that this newer release is like the High on Fire to the debut’s Sleep. This analogy seems quite apt, as the six tracks contained here (ranging anywhere from four to nine minutes apiece) all seem a bit more faster, more aggressive, and more direct than the previous material had been. Of course, these are all relative terms: “faster” in this case means up to the speed of, say, the beginning of “Electric Funeral,” not that of its midsection, or on the level of a song like “Cornucopia,” not one like “St. Vitus’ Dance.”

This album’s songs are made up of doomy riffs that give off a dark, ominous, cautionary vibe — and for good reason. Each one is based on a different piece of the ultimate apocalyptic tale, the Book of Revelation. As you’re surely aware, this is a subject which has been an inspiration to no shortage of material throughout the history of metal music. But that doesn’t take anything away from your ability to enjoy these concepts and stories reinterpreted into cataclysmic instrumental stoner/doom music!

Grab yourself a copy of To Sleep Beyond the Earth here and Your Doom has Come here. Both may also be streamed via Bandcamp, right here: