Hello, and happy Easter Monday! Today’s kind of an ugly, rainy day here in Pittsburgh, so I guess it’s not such a bad thing that I’m stuck at work. Maybe the weather is nicer where you live, and maybe you don’t have to work because maybe in your country today is an official holiday — folks many parts of the world will be celebrating the beginning of Eastertide. In either case, I’d like to talk about an album that was released almost a year ago — actually, it was during the last week before Pentecost, the conclusion of the Eastertide season.

That album is the self-titled debut of crust-post-punk supergroup Tau Cross, whose name comes from the T-shaped symbol of the Franciscan Monks, based on the Greek letter Τ (Tau). In traditional symbolism, this letter is used to represent the cross, since ταυ is an abbreviation for the word Σταυρός (Stavros, which means “Cross”), and because the letter itself is cross-shaped. As such, the Tau symbol has also come to stand for Resurrection, and by extension, is closely associated with Jesus — nearly as much as the letter Χ (Chi).

Anyway, that’s surely enough of a history lesson for today, let’s get to the music! As an added bonus (for those who live in the northeastern U.S. — which includes Pittsburgh! — or southeastern Canada), scroll down to the comments section to find details about the band’s trip across the region which starts tomorrow night and runs for about a week and a half — their first live performances ever! 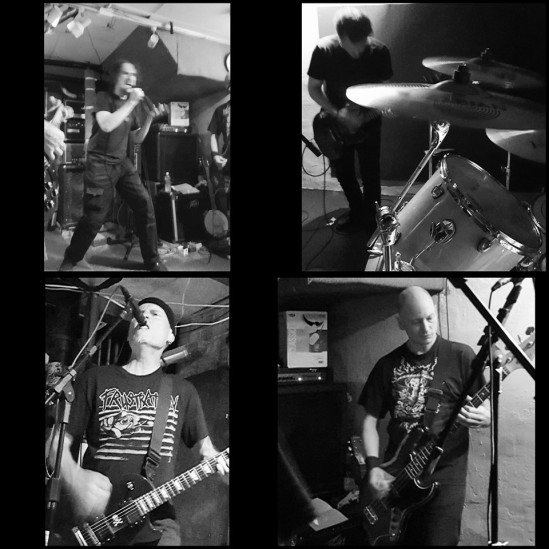 The group Tau Cross is fronted by Rob “The Baron” Miller, vocalist and bassist for the highly inventive and influential UK crust band Amebix; he is joined by drummer Michel “Away” Langevin of Canada’s Voivod, renowned for their rather progressive form of thrash; the line-up is rounded out by a pair of American guitarists: Andy Lefton of War//Plague and Jon Misery from Misery. On the surface, outside of an obvious resemblance to Amebix due to The Baron‘s distinctive vocal style, this album may surprise you if you were expecting it to sound exactly like a combination of its constituent parts. But bear in mind the wide variety of influences on its members’ other bands: for example, early post-punk like Killing Joke crept into Amebix‘ sound nearly as much as heavy metal and hardcore punk did, and one of the best-known songs from Voivod‘s breakthrough album was a Pink Floyd cover from their early, psychedelic/experimental days.

Many of the tracks here are indeed chiefly of the thrash/punk variety; songs like “Prison” or “Stonecracker,” with fast, chuggy riffs and Lemmy-style crooning, give off a bit of a Motörhead vibe. But the majority of the material here is a bit more complex than that, like “Fire in the Sky” which incorporates a church organ part that sounds like it could have been lifted from a Bach fugue, the primarily acoustic “We Control the Fear” and “The Devil Knows His Own” (both of which also include violins or other strings at various points), and “Midsummer” which starts out with the sound of a didgeridoo. Several of these, based on their arrangements, seem more reminiscent of early Hawkwind than of Mr. Kilmister‘s more famous later band. Elsewhere, like in opening track “Lazarus,” the thrash/punk guitar riffs are combined with an equal portion of Killing Joke/Public Image Ltd./Magazine-style post-punk sound, and “Sons of the Soil” expands on that post-punk influence — stopping just short of new wave territory, ultimately coming across like a somewhat more aggressive Midnight Oil.

The last of these features an example of a common thread throughout much of the album: augmenting the hoarse shouting and singing with darker-toned spoken word sections, also found in “Midsummer,” “We Control the Fear,” and “The Devil Knows His Own”; in places, these spoken bits almost reach the level of an ominous whisper, resulting in an effect similar to that occasionally employed by someone like Roger Waters. The real soul of this album, though, would have to be its lyrical content; most songs contain various metaphors and symbols (opening track “Lazarus,” and album closer “The Devil Knows His Own” both mention ravens, which has been a reference to either good or bad luck among various cultures throughout history, but most often has been used as a symbol related to death), or outright stories that seem to serve as parables. Many references are made to good and evil, truth and lies, but most significantly, life and death — and a resurrection or return after death. This is at its most overt in “Lazarus,” whose title and lyrics clearly allude to the principal character in one of the more famous resurrection stories in the Bible, but “Hangmans Hyll” makes mention of “a doorway to death, but a return,” and the sort-of-thrashy-yet-kind-of-upbeat/uplifting “Our Day” predicts a rebirth or renewal, declaring “our day will come,” and “our suffering will end.”


You can listen to the album via Bandcamp (below), and then grab a copy on CD, vinyl, or digital download right here.