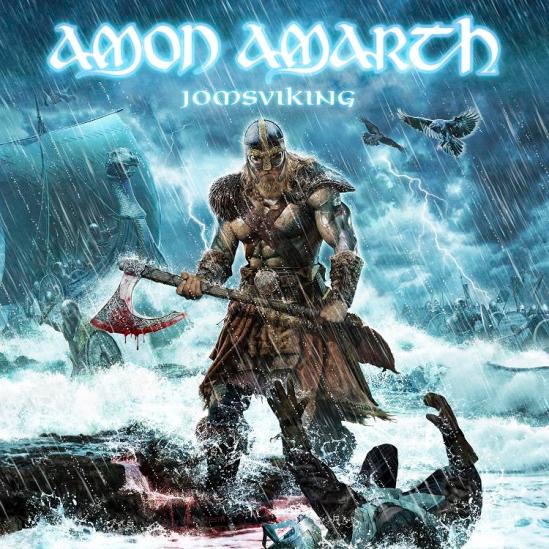 Well, it seems like this really turned into a week filled with black metal (or some form or variant of blackened-whatever), didn’t it? That wasn’t on purpose or anything, there just happened to be a few interesting things within that realm that I had wanted to share with you. But today we’ll be turning in a completely different direction: Viking metal!

(That was a little joke to piss off the Internet Metal Nerds, because the subject of whether Viking metal is really a thing, and if it is, how it should be classified, has been discussed endlessly, without ever really reaching a conclusion except for the fact that, as typified by bands like Enslaved and Bathory, it’s [somewhat] widely accepted as a subset of the black metal genre.)

But that’s not what we’re here to talk about at all — today’s topic is more along the lines of melodic/epic/anthemic metal. But I mean, look at that album cover (above)! Listen to the music (there will be previews near the end of the article)! Look at that photo of this band’s incredible stage setup from when I saw them a few years ago (below)! Despite their name (which means “Mount Doom,” a reference to the volcano from the Lord of the Rings books and movies), everything about Amon Amarth just screams “Viking metal”! What else would you call them?

In any case, this bunch of Swedes have a brand new album (their tenth) coming out tomorrow, so we’re going to take a look at that. Also, they’re coming back to the U.S. and Canada in about two weeks, marauding their way across the continent throughout April and May, so be sure to take a peek down at the comment section below where I’ll include the full list of those tour dates… 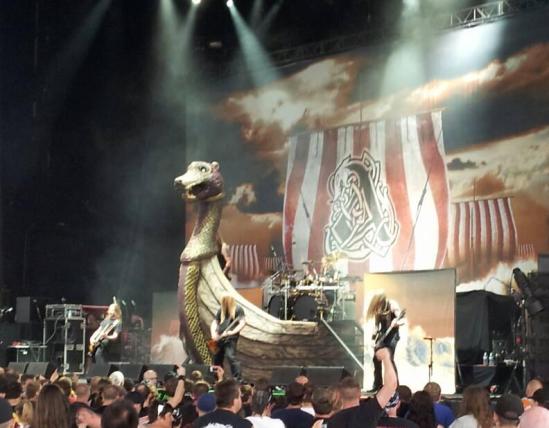 Jomsviking, named for a legendary brotherhood of soldiers of fortune, is a conceptual album with a narrative (written by vocalist Johan Hegg) running through the whole thing. He describes it as “a pretty simple story where a young man is in love with a girl but unfortunately she’s being married off. He accidentally kills a man when this happens and he has to flee, but he swears to have revenge and win her back.” The Jomsvikings, it seems, come into the story as part of this plot for vengeance.

Much of the album is presented as a first-person narrative; while this is essentially melodic death metal, complete with growled vocals, the lyrics are not indecipherable (somewhat akin to Amorphis during the period when they were transitioning away from strictly death metal, but still kept many of the genre’s characteristics) so that the story can come through.

Although at its root, this album centers around a love story, the majority of the material here focuses on more aggressive and angry topics: feelings of betrayal and seeking vindication, plus plenty of battles and all the other typical activities associated with the Vikings. In fact, the very first line from the first song (“First Kill”) — just twenty-five seconds into the album (following some suitably triumphal-souding twin guitar leads from Olavi Mikkonen and Johan Söderberg, and accompanied by some fancy fretwork by bassist Ted Lundström) — begins, “The first man I killed …,” so that pretty much sets the tone right there.

In keeping with our narrator’s furious frame of mind, most of the songs here take on a heavier, more death/thrash style. For example, “One Against All,” which also nicely showcases the contribution of session drummer Tobias Gustafsson (of Vomitory), who more than capably fills in on this recording, since the departure of Fredrik Andersson about a year ago. (For those who may be curious, the band recently announced that live duties for the upcoming tour will be handled by Jocke Wallgren of October Tide.)

But even the parts that don’t sound overtly heavy are still metal as hell; for example, the lead-in to “On a Sea of Blood” is just a few simple lines of spoken words, but the protagonist confides, “I’m haunted by dreams of blood, visions of death and gore.”

The setting obviously plays a major role in how the story develops, but also how it is recounted, because intertwined with delivering the plot, many of these songs also delve a bit more into the culture of the Jomsvikings. “The Way of Vikings,” in particular, contains many examples of the strict code of honor followed by the order, but the obligatory shout-along Viking drinking song “Raise Your Horns” and the Darker-toned “One Thousand Burning Arrows” (which mourns the loss of a respected leader in battle) also lend some insight into the lifestyle surrounding our characters.

Following the speed/death metal ode to the narrator’s sword “Vengeance is My Name” (a bonus track only available on the special edition CD), the story reaches its climax in “A Dream That Cannot Be,” told from the perspective of both the main character and the object of his affections, in the form of a duet with renowned vocalist Doro Pesch. I won’t spoil the ending for you, except to say that things don’t necessarily turn out exactly as our hero may have hoped. The final song “Back on Northern Shores” deals with the aftermath in a somewhat somber dénouement, but as lyricist Hegg explains, “I like sad endings, because they’re the ones that affect you the most.”

“When you write an album like this one, you’re basically making music for a movie,” according to guitarist Mikkonen, and that’s probably the most accurate way to summarize Jomsviking — not just an album of songs, but a whole musical saga that can paint a vivid picture for the listener; a picture that shows the tale itself as it unfolds, and the world in which it is set, as well as expressing all of the emotions and mood during each part of the story. You can preview two of the songs in the videos below, plus a bit of behind the scenes Q&A in the two videos after that:


Buy Jomsviking now in digital, CD, or vinyl formats, or go all-in and grab the special Viking Ship boxed edition which includes the album on CD (with exclusive bonus track) and a collector’s model viking ship (pictured below).