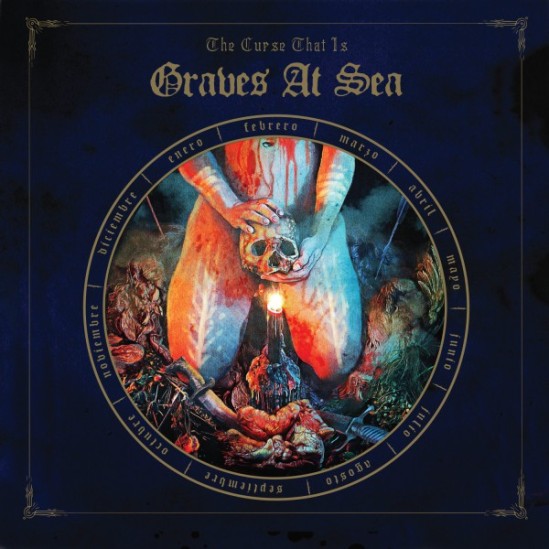 After forming nearly fifteen years ago, taking some time off and then reforming with a number of line-up changes over the years, and recording a spattering of demos and EPs and singles and splits during all that time, TOMORROW (Friday, April 1st) the crushing doom entity that is Graves at Sea will finally drop its debut full-length record on an unsuspecting world. A preview copy of The Curse That Is showed up in my email inbox earlier this month, while I was away on vacation. I was pretty excited to check it out, so as soon as I found myself with a spare 75+ minutes to sit and listen to it, I made sure to seize the opportunity. Which happened to be on the plane ride back home. Honestly, the irony inherent in that situation — listening to a band called that while watching the flight attendants demonstrate the use of flotation devices and various other safety features — didn’t dawn on me at all until sometime later.

Anyway, like I said, the album comes out tomorrow, so I’d like to tell you a little more about it. And then, about a week and a half from now, the band will be heading across the country to take a trip up the east coast — their first time doing so in quite a few years — with Atlanta’s Order of the Owl (who, you may recall, put on a hell of a show themselves, as I had discussed here a couple of years ago). So once you reach the end of this article, keep on scrolling to the comments section, where I’ll include a list of dates and cities these two groups will be visiting. 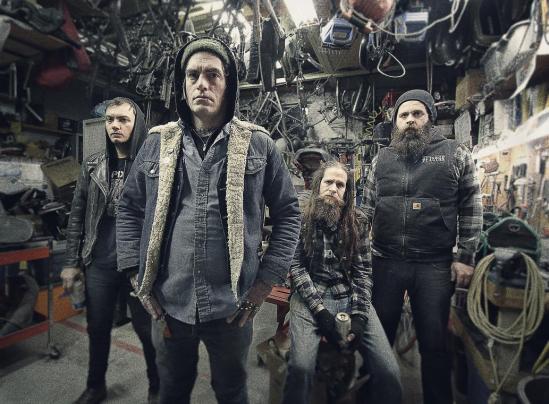 With eight tracks averaging close to ten minutes apiece, The Curse That Is is a titanic hulk of an album, oppressively heavy practically every inch of the way. When the first track (the eleven-minute title track) kicks off, it opens with a short prelude of droning sustained guitars, but at first it sounds more like a rumble than actual music. The feeling of anticipation before the song officially jumps into the weighty doom riffage is just like that “oh shit” moment when you’re sitting in an I-max theater, and you can’t see anything on the screen yet but you can feel the sound shaking your seat.

Despite the enormous gravity of the material here, overall the songs are not particularly slow. In a few spots things may decrease in tempo somwehat — around the middle of “The Ashes Made Her Beautiful” it gradually slows ploddingly, before speeding back up again; and toward the end the final track “Minimum Slave” turns very sludgey (although still not super slow, more like a marching sludge) — but for the most part it spans from a moderately slow speed to just moderate. Regardless, it really is heavy; every note ponderous and deliberate, the drums incredibly thunderous.

Only in a few spots does the crushing weight of the music relent: during the final two minutes of “Dead Eyes” everything else ultimately gets drowned out by an acoustic guitar and string section, playing a dark, brooding theme; “The Ashes” starts off with those same mournful strings and they make a reappearance along with the rest of the band close to the middle of the song; finally, the penultimate track “Luna Lupus Venator” (which, coming in at just under three minutes, is by far the shortest one to be found here) is an instrumental piece consisting only of the acoustic and string parts. But although those particular sections may not be blaringly, punch-you-in-the-face loud, doesn’t necessarily mean the tone or expressiveness of these parts are necessarily less heavy.

A hallmark of the band, which is prevalent throughout this album, is the employment of dual vocal parts that occasionally work in tandem, but more often they seem to alternate taking the lead. In the first song, the main vocal is basically a hoarse snarl, while the second is similar but much harsher, spitting out the words like a venom. This second part then takes over the primary position in most of the remaining songs, while backed up by one that sounds even nastier still: in “Dead Eyes” the second part is like the gurgle from a maggot-chewed zombie’s throat; in “Tempest” it’s basically the same as that, only this time also sounding like it’s under water. And so on.

With all of the vocals being so unclean, and with so much heft to the other layers of instruments, it does take a bit of straining to catch most of the lyrics. But in so doing, the listener will be rewarded with some rather bleak social commentary. For example, the song “Waco 177” — with references to civil liberties being stripped away and including plenty of specific details — apparently is concerned with those arrested in the aftermath of the May 2015 shootout in a Texas restaurant. Most of the views expressed are a bit broader than that, involving somewhat more universal conditions rather than such a specific topic, but in all, the lyrics often touch upon subject matter every bit as momentous as the sound of the songs themselves.

You can preview the first three tracks of The Curse That Is through the Bandcamp player below. Then, the album can be pre-ordered in CD, vinyl, or MP3 format right here.