Hey folks, HAPPY FRIDAY! As you’ve surely noticed, we’ve spent a lot of time this week talking about tours kicking off this weekend, and bands who are coming to Pittsburgh, but believe it or not I’ve got another announcement for you!

Starting TONIGHT (Friday, May 13th) instrumental legends Karma to Burn from West Virginia and long-running stoner trio The Atomic Bitchwax from New Jersey will be heading out on a month-long tour all across America, opening for The Obsessed (which was one of the earliest of Wino‘s plethora of bands).

The full list of dates for this tour (including a stop at Pittsburgh’s Altar Bar tomorrow night) will be listed down at the bottom of this page — in the comments. But first, lets take a closer look at a (relatively speaking) recent album from each of those two supporting bands …

Taking its name from the tombstone in the classic film The Good, the Bad, and the Ugly (that fact will become pertinent later, stay tuned), Arch Stanton includes a total of eight tracks, most of which are (coincidentally) right around 4:20 in length. Following a foray into songs with vocals, this 2014 release has been lauded as a return to the classic style of beloved fan favorites like Almost Heathen and Wild Wonderful Purgatory. And like most of the band’s material has been throughout their career, each track here (seven new, and one newly recorded but previously unreleased older song) has been given a number in lieu of a title.

Right off the bat, “Fifty-seven” grabs the listener by the ears and pulls you headfirst into a quick-paced tour de force of energetic rhythms and riffs. When the song breaks down a few times near the end and swiftly builds back up again, the compelling forward motion brings to mind flying down the road in the same way that a song like “Radar Love” does. Each track here seems darker, heavier, and at the same time catchier, than the last. One thing that’s immediately noticeable is that these songs were intentionally written as instrumental pieces. Too often with instrumental bands, the songs are written exactly the same as they would have been in a band with a singer, but then they simply don’t add vocals to it. Not the case here, because it never feels like there’s anything missing, or that the arrangement is empty or too repetitive. The band members feed off each other expertly, and manage to fill in all the gaps with intermingled riffage.

These intricately combined rhythms and riffs usually consist of some rather crunchy-sounding guitars, and a bassline that usually either follows or serves as a counterpoint against the guitar — sometimes fuzzy or sometimes with a sort of spaced-out wah sound. On occasion, certain other influences or flavors seem to creep through: the introduction to “Fifty-four” has a very southern-blues vibe to it, while the darker and angrier “Fifty-five” is nearly reminiscent of “Iron Man” at the beginning. Midway through “Twenty-three” the band seems to visit an almost mystical place — and this song in particular (as well as “Fifty-three”) really make this reviewer think of The Ravenna Arsenal in terms of the way the parts blend together, as well as some of the rhythms used, and even the guitar tone itself. I’m not sure if that comparison will be meaningful to all readers, but those Ohio natives are absolutely worth checking out for those who haven’t already done so! Finally — because I did promise to get back to discussing the album title — one of the darkest-sounding tracks here (and certainly the longest, clocking in around six minutes), closer “Fifty-nine” starts off with almost a minute worth of samples from the dialogue and famed score of The Good, the Bad, and the Ugly, with another snippet of dialogue halfway through — the only words found anywhere on the album. 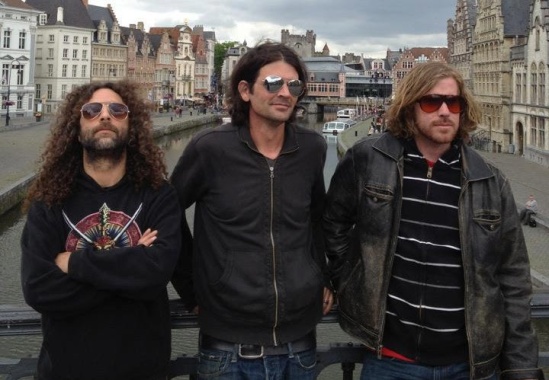 The Atomic Bitchwax are a band who have sort of lingered around the periphery of my radar screen for many years — I remember hearing of them for the first time when I stumbled across a YouTube video featuring a Pink Floyd cover they had done at a live show, quite a while ago. I couldn’t even say right now exactly which song it was, but I do recall appreciating the band’s stoner/fuzz reinterpretation of classic/psychedelic rock. Since that time, I’ve caught a few songs here and there, but to be honest Gravitron — released at the tail end of 2015 by Tee Pee Records — has ended up being the first whole album of theirs I’ve actually experienced. And the ten tracks here have managed to live up to the expectations.

Kicking things off with probably the best song I’ve ever heard that was named after both a song and former member of GWAR, “Sexecutioner” is a quick romp filled stoner-fuzz goodness, including a fuzzy bass solo, a wailing guitar solo, and plenty of crunchy riffs! These same elements pop up throughout the whole album — material that’s primarily full of stoner/grunge/alternative rock sounds, but with plenty of other influences like classic/southern rock sprinkled here and there: for example, the guitar solo in “It’s Alright” and the guitar sounds in “Coming in Hot,” among various other places.

Despite all the crunch and distortion going on here, the main classification for this album would definitely be stoner rock (with bits and pieces of the various other genres mentioned here); some of the heaviest moments come in later tracks such as the jazzy “Down with the Swirl” which incorporates a quick, bouncy bassline with guitar riffs that are rhythmically a little bit similar to “Señor Limpio”, and right at the end of the alt-grunge-esque “Roseland” — but at no point would anyone be likely to confuse this album with “metal” of any sort. Nevertheless, ironically, one of the biggest highlights (in my own opinion, of course) is actually one of the catchiest and — for lack of a better word — poppiest songs of the bunch. Closing track “Ice Age Hey Babe,” while still incorporating plenty of stoner vibes and a touch of classic/progressive rock, is just a fun excursion into 90s alternative revivalism, bringing to mind folks like Matthew Sweet and Urge Overkill (especially during the guitar solo) — making for a peculiar multi-layered sense of nostalgia, as it sort of feels like a throwback to some of the music from my high school years twenty years ago, that at that time was already a throwback to stuff from twenty years before that.


You can buy Arch Stanton right here, and Gravitron here. And don’t forget to scroll down to the comments section to take a look at those tour dates!