Coming back to work after a holiday weekend is always rough. It’s like struggling through the Monday after a regular weekend, but twice as bad — at least. Especially when, despite having an extra-long weekend, it didn’t actually feel more relaxing at any point, because each day was filled with stupid family obligations.

This past weekend was like that, plus one day was about eight hundred degrees with a million percent humidity, while the next day was all windy and rainy, neither of which makes for ideal weather for picnicking and outdoor activities. Probably the least worst part of the weekend was one point where I was able to disappear into the woods for a little while, just to have a change of scenery and to get away from all the people discussing whatever it is that people discuss. Even if I didn’t really see anything interesting besides a bunch of trees, and even if the only sounds were a few random bird noises that were mostly obscured by the ceaseless buzzing of the cicadas (which have really come out in full force around this area), it’s still nice to be able to escape, however temporary it may have been.

I generally feel the same way when I’m at work, which is why I have my headphones on more often than not. To be able to close out all the inane conversations around me, and to be able to immerse myself in what I’m working on, while forgetting (even if only for a few minutes) that there are other people around — this makes each day at least marginally less unpleasant. Today I’d like to share something with you that combines the sounds of nature with a blur of other noises into which you can easily submerge yourself, completely drowning out all of your surroundings. 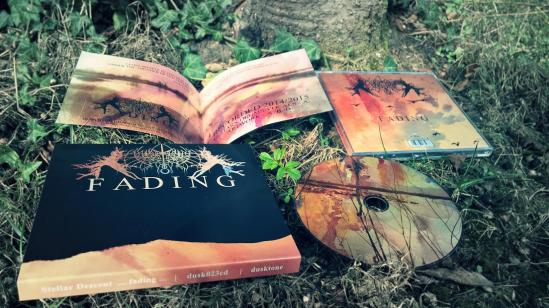 Fading is an album that consists of a single, sixty-seven minute track; it’s based on an experience in a wildlife refuge along the Pacific flyway — one of the primary north/south routes followed by numerous species of migratory birds. This refuge, while not identified by name in the album’s notes, would be one of several particular locations along that path where the traveling birds are drawn to rest — often numbering in the hundreds of thousands, or even millions at a time — to pause briefly for refueling, so to speak, before continuing along their journey.

The creative force behind Fading, also the sole member of the musical entity that is Stellar Descent, describes the inspiration for this composition: “I found myself completely enveloped by something almost unbelievable. Infinite expanses of waterfowl plastered against a blazing sky, taking to flight in huge, thunderous flocks that seemed to shake whatever lay below. The sheer numbers and sounds were like nothing I had ever imagined. Toward the evening, the sky turned a vibrant shade of yellow and orange and the coastal range turned to stark silhouette. And at that moment, it all seemed too much. I was just lost in this completely surreal, textured scene.”

This ‘song’ starts with actual bird sounds — honking, quacking, squawking — that were recorded on location in the Pacific Flyway refuge. To this foundation, layer upon layer of atmospheric and psychedelic-tinged black metal are piled. While describing the typical sound of black metal as “a whirlwind of angry bees in a cave” may have become a common trope in music-writing (for example: see here, here, here, here, etc.), the sound here is clearly designed to emulate and embrace the wide-open space upon which the material is based, and manages to successfully evoke images of the enormous swirling and swarming cloud of birds as they fill the sky like a writhing mass of living shadows.

At first the sound is rather droney; beyond the spattering of duck and goose noises, it features slow and hypnotic drums in the background, drawn-out screeched vocals, sustained synth/organ-sounding chords, along with plenty of static and random noise. Things gradually increase in speed and intensity, particularly the drums which become more prevalent and chaotic. Just like an actual mega-flock of birds, the sound here comes and goes in waves, sometimes clearing out a bit (such that the bird recordings gain prominence), with the music becoming relatively more mellow and droney; at other times, the whole thing is more full of noise, more intense — it may be a coincidence but these peaks and valleys often seem to occur at roughly seven-minute intervals.

Once thirty or forty minutes have gone by, it seems as though all the different sounds here have nearly become a homogenous blend, swelling to a crescendo and threatening to thoroughly overwhelm the listener. Just like the odd occurrence of a brief moment of silence in the midst of the myriad simultaneous conversations among a crowd of people in a large room, the music quickly drops out in a few spots over the last several minutes, allowing the gaggle of birds to reemerge for a few seconds here and there; and finally by the last minute or so, each part abruptly fades away in turn, just like how the movement of a few individuals (in a flock of sheep as well as birds) can spur the entire group to dissipate, leaving the area almost as a single unit, disappearing just as suddenly as they had appeared.

You can buy a copy of Fading right here, at the bargain price of just 99¢ since the whole thing is only one track!