Six Feet Under – Graveyard Classics IV: The Number of the Priest (Metal Blade Records, 27 May 2016)

Okay, here’s my story. About fifteen or sixteen years ago, the file-sharing software Napster had hit its prime. The MP3 file format had been around for a few years, and it was a revolutionary new way to store and transfer digital audio due to the way it compressed data, which meant that over a relatively decent dial-up connection, it became possible to download a song in a matter of several minutes rather than hours. But coinciding with the rise of the Napster service, cable or DSL internet services were becoming increasingly widespread among household users — and while these broadband connections couldn’t compare with the direct lines found in larger businesses or colleges (or even with the high-speed options available in homes today), this increased upload and download speeds exponentially: now (depending on the speed of the specific peer-to-peer connection), that same MP3 file could usually be downloaded in less time than it would take you to listen to the song it contained. There was still plenty of technological advances yet to come, to the point where you can now go to Bandcamp and download an entire album in about thirty seconds or less, but compared with the way things had been for years prior, this was a pretty amazing development.

At that time, I was just into my early twenties, and very eager to learn about all the music that was out there for me to discover. No longer limited to what was available on the radio or MTV, there was a whole new world now accessible with just a few keystrokes and mouse clicks. And so I set out to fill my ears with everything I possibly could. Wikipedia was still in its infancy then, and the Encyclopaedia Metallum had not yet been launched, but I remember finding an invaluable source of information at the now-defunct CDNow.com — which, at the time, was basically the music store equivalent of Amazon.com, who was still primarily involved in selling only books. CDNow had fairly extensive biographical information for most of the artists whose music they sold, and also had an excellent system of recommendations — a series of rabbit holes through which I spend many, many hours wandering. Between all of that online research, and sometimes just stumbling upon random things in the course of conducting Napster searches, I had started to amass quite a sizable library of music, in an ever-broadening range of styles.

The point of all this is that at some time — I guess it was probably around early 2001 — I happened upon a death metal version of Dead Kennedys‘ “California Über Alles” by a band called Six Feet Under, which I thought was well-done, in a somewhat amusing, tongue-in-cheek kind of way. As it turns out, just before this (specifically, in October 2000), the band had released an album called Graveyard Classics which was entirely made up of cover versions of old-school rock, punk, and metal songs — so naturally when I tried searching for more of their material, these were the songs that popped up most often: “Sweet Leaf,” “In League with Satan,” and so on. At the time I didn’t know anything about Six Feet Under, although I did learn that it had first launched as a side project of Chris Barnes who had been the vocalist for Cannibal Corpse. Now that was a band I was at least somewhat familiar with, as a high school classmate had introduced me to their highly disturbing brand of extreme metal back in the early- or mid-90s. Anyway, given that limited amount of information, and the selection of songs I had been finding available for download (for what it’s worth, I later did end up buying a copy of Graveyard Classics), the natural conclusion I drew at that time was that apparently Six Feet Under was essentially the Me First and the Gimme Gimmes of death metal …

I don’t remember exactly when, but eventually I learned the full story behind the band — that they do have original material as well, and that Barnes had decided to shift all his energy here after being expelled from Cannibal Corpse following their first few albums (and not long after forming this side project), for reasons that vary depending on which version of the story you hear, but which may have included being more interested in marijuana than in being seriously committed to the band. Whether there’s any truth to that could be debated endlessly, but I’ve always found it a bit peculiar that there might have been an issue with someone’s seriousness when it comes to membership in a band whose lyrics and titles were so offensive that it was almost cartoonish, and whose artwork was so absurdly graphic that their albums were normally sold mostly (or even entirely) covered with a plain cardboard sleeve. But anyway, none of that is really relevant here — we’re here to discuss Six Feet Under, who have always seemed to (at least at some level) embrace the inherent silliness of the extreme death metal genre — especially when it comes to tackling cover songs that are often, as I noted earlier, clearly intended to be at least somewhat tongue-in-cheek. 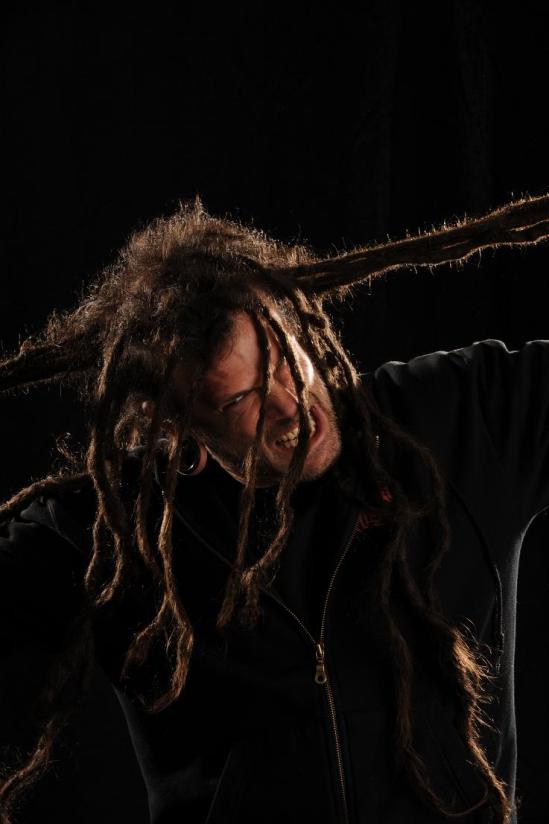 Which leads us to our actual topic of discussion: today, Metal Blade is unleashing the FOURTH installment of the Graveyard Classics series; this one, subtitled The Number of the Priest is made up of (as you might have guessed) half Iron Maiden songs and half Judas Priest. This collection follows almost exactly one year after the band’s previous studio effort, Crypt of the Devil, also a Metal Blade release. Bandleader Barnes has seen a bit of a revolving door in his supporting cast throughout the years; for both of these albums, he has recruited members of Cannabis Corpse as his backing band — ironically, considering that they’re named after the band who had fired him two decades ago, but also very fittingly, since this is a group who clearly recognize that it’s possible to produce vile and nasty music while also having fun with it. Not to mention an obvious shared interest in herbal supplements.

While some people may write off Cannabis Corpse as a gimmick — and it’s true that they operate mainly as a parody of extreme death metal bands — the fact remains that these guys are all skilled at what they do, and listening to the ten tracks of Crypt of the Devil it seems like a wise decision to pull in a group of musicians who already have had years of chemistry working together, rather than assembling a crew of random guns-for-hire. Frankly, there are those who also look at Six Feet Under as a joke as well, based on the mixture of reviews one encounters online, but I’m not sure I understand why this is the case. As the founding vocalist of one of the best-known death metal bands in the world, Barnes quickly developed a signature style, filled with inhumanly deep gutteral growls and grunts, and peppered with equally inhuman croaks and gurgles — which has been hugely influential to countless bands over the years. On this album — as with pretty much all of this band’s original material — the themes of brutal violence and gruesome evisceration are all around, certainly not songs you would want to share with your grandmother!

Musically, this is also in keeping with the traditional Six Feet Under sound: high-quality solos, and gut-punching riffs — sometimes slipping into faster double-time mode, but just as often slowing things down and taking more of a moderate- or even low-tempo approach, even going as far as incorporating a bit of a doom-metal vibe in some of the slower riffs (which, honestly, just seems that much heavier and more brutal compared with other bands whose philosophy is to go at maximum speed constantly without ever letting up). Unsurprisingly for anyone familiar with Cannabis Corpse or Municipal Waste, the bass work here is top-notch, and shines through at some point in nearly every song. Beyond the thrashy vamps and riffs, the twin guitar leads (for one example, see the beginning of “The Night Bleeds”) sometimes show a bit of traditional heavy metal or NWOBHM influence, which would make a great stepping stone to Graveyard Classics IV …

It might seem a bit risky for a death metal band to try and tackle songs by bands who have — without question — two of the greatest and most powerful vocalists in the history of heavy metal. Furthermore, aside from the vocals and the high-quality songwriting, both of these bands are also universally beloved for their famed guitar tandems. To that last point, I’ll say that — while the band doesn’t try to emulate the sound of the original songs quite as closely as on the original Graveyard Classics album, where it essentially seemed like death-growl karaoke for the most part; rather, they have adapted them a bit more into their own death-thrash style — the guitarists here do a respectable job, and comparing “Side A (Judas Priest)” with “Side B (Iron Maiden),” it’s clear that they have put a great deal of effort into differentiating their tone, to somewhat resemble that of both original bands. And as far as the other part — the vocals — there’s no mistaking Chris Barnes‘ performance style; this would not be recommended listening for die-hard Halford or Dickinson fans, and I have no doubt that this album will find its fair share of detractors online just like all of the band’s previous excursions into covering non-death-metal tunes. But basically, they have a schtick that works for them, and once again it’s all in good fun — so let the haters hate, I guess?

One final thing I’d like to point out, it’s nice to see them choosing some less-obvious songs to remake — instead of picking monster hits like “Breakin’ the Law” or “Run to the Hills.” While these are obviously two tremendously well-known bands, and as such they really don’t have any “obscure” songs, Six Feet Under have made some interesting selections, which span a wide range of each band’s respective discography: “Night Crawler” from Painkiller, “Starbreaker” from Sin After Sin, “Genocide” from Sad Wings of Destiny, “Invader” (featuring Ray Alder of Fates Warning wailing in conjuction with Barnes‘ growling) from Stained Class, “Never Satisfied” from Rocka Rolla; “Murders in the Rue Morgue” from Killers, “Prowler” from Iron Maiden, “Flash of the Blade” from Powerslave, “The Evil that Men Do” from Seventh Son of a Seventh Son, “Stranger in a Strange Land” from Somewhere in Time, and (a personal favorite) “Total Eclipse” from Number of the Beast.


You can get your hands on a copy of Crypt of the Devil here, and check out The Number of the Priest right here!