Hello, and happy Friday! Today I’d like to call your attention to a pair of releases you may enjoy, that just came out last month. The second one is an album called Fire of the Spirit, Twilight Fauna‘s sixth full-length record over the past several years, in addition to numerous other discographical items. (As you may or may not be aware, Twilight Fauna is a solo black metal project with strong Appalachian folk roots, with everything written and performed by sole member Paul Ravenwood of Johnson City, Tennessee.) But before that, in light of it having been released a week earlier, we’ll talk about a 12″ split record that features Green Elder — also a Ravenwood solo gig, but this one entirely eschews the black metal aspects in favor of a more somber, pure Appalachian folk style. The flip side of this split consists of yet another single-member ensemble — one that’s even more elusive than the others we’re discussing today, in terms of sharing any personal information. It’s called Pensive Ceremony, and everything here is done by an individual known only as Pythagumus, apparently from somewhere near Tacoma, Washington.

The split record opens with Green Elder contributing some slow and pensive acoustic guitar strumming, across three tracks that span about twenty minutes. The first of these, “Scattering Ashes,” uses a fairly consistent rhythm but with a slightly halting tempo. The vocals here are very quiet, and pensive as well, just a bit of melodic singing that hangs back in the distance; and this track later introduces some sort of wooden flute or recorder, which alternates with a sparsely plucked banjo.

Second track “Wood and Stone” employs a somewhat looser acoustic guitar part, and here it’s blended a bit more with the vocals, so that they are equally audible; a smidgeon of flute returns, right at the end. Closing track “Winter Spirits” has a very similar feel to the first song: although the acoustic picking is very sparse at first (and with occasional singing by woodland birds, as well as some angelic guest vocals), later some more flute and banjo combine with the guitar in a style that is remarkably similar to “Scattering Ashes,” except for the appearance of a different singer on this song.

Plaintive, sparse, and understated, this side of the record overall feels very restrained, but the careful listener may suspect there are floods of emotion bottled up just beneath the surface; like the attitude generally associated with the people of Appalachia and the hardships they endure, these tracks often give off a feeling of an ever-present underlying sadness, but mostly one of quiet and willful resolve.

Though it contains twice as many tracks, the Pensive Ceremony portion of the album also runs approximately twenty minutes long. Some of the songs here follow a similar style to that we have already heard: opener “Calm Obsecration” likewise is built upon quiet and pensive acoustic plucking, with additional mournful coloration provided by a few flutes and/or recorders, and near the middle of these six songs, “Cleansing” also has a strummy acoustic guitar, paired with some lovely (wordless) harmonic singing.

For a change of pace in between, “Wooded Shrine” and “Lost Fables” primarily consist of droney synth chords, spacey and atmospheric. The former very gradually builds to a very slight crescendo, but overall these tracks are fairly static — thoughtful and meditative, perhaps. Later, “Spiraling Samara” is also filled with spacey synth chords, although this one does see a little bit more motion than on the earlier tracks.

Neatly wrapping up the record, “Solace” unifies the threads of thought that have been running through these songs by combining much of the cast of characters from everything that has preceded it: quiet, slow acoustic arpeggios combined with drone notes (which, this time around, sound kind of like the bass chords of an accordion) in the background, as well as some more wordless singing. 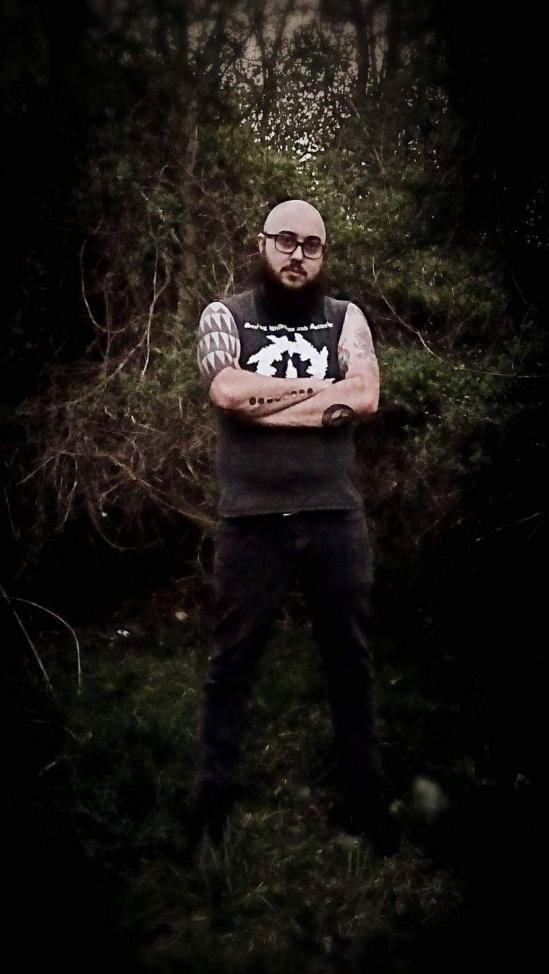 Years in the making, Twilight Fauna‘s Fire of the Spirit album centers around the concept of the ritualistic handling of venomous snakes in some rural churches — a practice that is supposed to demonstrate the strength of one’s religious faith. Paul Ravenwood states, “I do not share their beliefs, but I tried to approach the topic in the most honest, respectful way possible in order to tell their story.” Actual historical footage, in addition to extensive research and interviews, combined during the album’s creation; that research has also turned up numerous sound recordings of people discussing these deeply religious rituals, which have then become interwoven among the Fire of the Spirit‘s six tracks. This has added a definite sense of authenticity, in addition to propelling the record’s narrative forward, much in the same way this type of material was used to augment the effect of fellow Appalachian folk/black metal artist Panopticon‘s coal mining concept album Kentucky.

Opening track “Walking with the Ghost” introduces the main theme of the album by combining a ruminatively strummed acoustic guitar rhythm with a confused din of voices that sounds like a group of people settling in and greeting one another, such as might take place prior to the commencement of a church service. “A Green Moth in the Mist” begins with a sample of someone adamantly talking about the handling of serpents, whereas “Laying Out the Fleece” uses thoughtful acoustic rhythms to accompany someone talking about the concept of speaking in tongues. Another primarily acoustic track, “Anointing Oil,” features what sounds like an older woman talking about repenting and the coming of death, in a rather bold and unafraid manner; “Tongues of Knowledge” incorporates the sound of someone preaching passionately, and the final track “A Glass Dalia” also includes bits of talking in a few spots, interspersed with the music.

That music takes numerous different shapes and forms throughout this forty-minute-plus excursion. Halfway through the first song, it switches from a pensive acoustic to an echoey electric; a couple minutes later, the guitar becomes very raw and distorted, and very up-front. There seems to be a slight hint of vocals and occasionally the ghost of some sort of percussion is implied — which holds true for the more traditionally-black-metal-styled next song, “A Green Moth in the Mist,” as well; vocals and drums here are slightly more audible than in the last track (but still not that much). The song breaks down into a moment of introspection midway through, but before and after that, the level of cacophony reaches a furious state, with dissonant chords mimicing those in the guitar part of Syd Barrett‘s “Astronomy Domine“; in a similar vein, the music essentially on a psychedelic acid trip for the last few minutes.

More contrast between styles can be found in the later tracks: “Annointing Oil” introduces sustained heavy power chords, very slowly at first but ultimately sort of overwhelming the rest of the music, before again returning back to a simpler acoustic guitar with a bit of background singing. “Tongues of Knowledge” develops into doomy, atmospheric guitar notes that gradually increase in intensity and density, breaking down into a few sparse and introspective notes a couple minutes from the end before delving back into heavily distorted blackened guitars and confused layers of miscellaneous noise and sounds. And finally, in the lovely but somewhat forlorn “A Glass Dalia” some sort of harmonica or melodica part gives way to banjolin-style strumming, combined with one last helping of distant singing.

After all is said and done, the artist concludes in the album’s press release: “In a way we all have our snakes to handle and our poisons to drink in some form or another. I have great respect for someone who believes in something strongly enough that they are willing to risk death.” This sense of respect and awe is conveyed rather well through the way this album has been assembled and presented, between the inclusion of traditional folk sounds, and the incorporation of dialogue that offers some insights into the subject matter without commentary or judgement.

You can stream both records using the Bandcamp widgets below. The Green Elder / Pensive Ceremony split is available on vinyl here, while the Twilight Fauna album can be picked up right here.