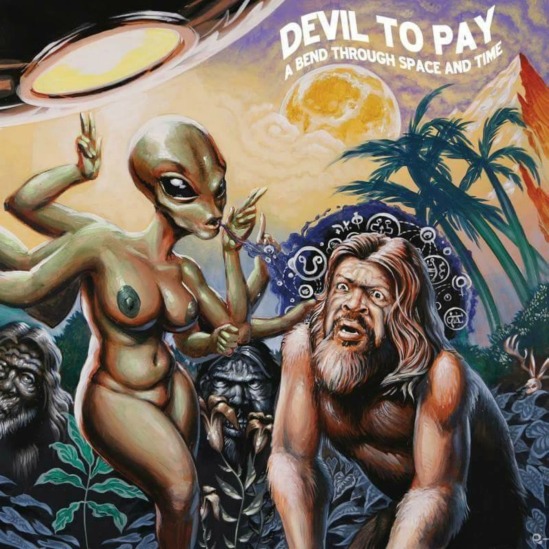 So — maybe you’ve noticed a running theme this week — but once again I’m sharing some music with you from a band that will be playing at The Maryland Doom Fest this weekend! That would be Apostle of Solitude, whose latest album Of Woe and Wounds has been hovering on my to-do list ever since it was released nearly three whole years ago. And while I’m at it, there’s another album I’d like to bring to your attention, last year’s offering by a band who are Indianapolis neighbors (and even overlap by one guitarist) with Apostle of Solitude, and whom we’ve spoken of highly in the past, Devil to Pay.

Apostle of Solitude formed back in 2004 with former The Gates of Slumber drummer Chuck Brown on guitar and vocals, joined by Corey Webb on drums. Several other members have come and gone since that time, but the line-up on their third album Of Woe and Wounds was rounded out by bassist Dan Davidson and guitarist/vocalist Steve Janiak (who also fronts Devil to Pay).

Like a tide slowly rolling in, the album opens with instrumental track “Distance and the Cold Heart” filled with guitar harmonies and cymbal crashes that slowly build up to the first song — and like that same tide receding later after washing away everything that was in its path, the album closes with the similarly slowly receding “Distance and the Cold Heart (Reprise).” In between, we find eight tracks of moderately-slow to medium-tempoed doom metal, with titles like “Blackest of Times” fittingly matching music that conjures images of darkness and despair.

Slow doomy riffs, more omnipresent cymbal crashes, a bass with a gravelly-rumbly tone that’s felt more often than heard, guitars that frequently soar in harmony with each other (when they aren’t trading off soloes like during the last few minutes of “Push Mortal Coil”), all blend together to create a gloomy mood that complements and supplements the vocals. Primarily done in a doomy/hard rock style, but here and there certain lines are nicely harmonized — always minor-key harmonies and diminished intervals (like Cultura Tres-style harmonies), matching up with the downtrodden feeling of the music.

Lyrically these songs are every bit as dark as the overall sound of the album; a few key phrases from penultimate track (and one of my favorites here) “Luna” center around “impending doom” and a “pain [that] won’t go away.” Another highly recommended track would be “Lamentations of a Broken Man” which features great examples of those harmonized vocals throughout, and which (in tone, in tempo, and in overall mood) seems a bit reminiscent of “Electric Funeral.” 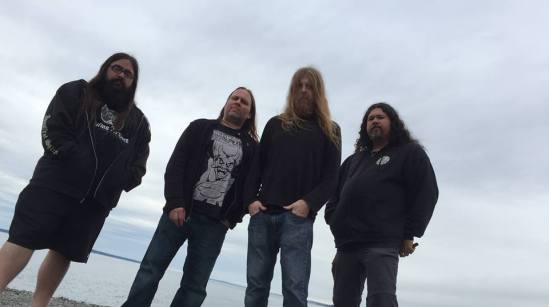 Devil to Pay have been around since 2002; while the line-up has been fairly stable for at least their past few albums, they did have their share of rotating members in the early days as well, including yet another ex-Gates of Slumber drummer (Chris Gordon, who is now with Wretch). At the present time, though, and for the past several years, in addition to vocalist/guitarist Janiak the line-up has included Matt Stokes on bass, Chad Prifogle on drums, and Rob Hough on guitar. A Bend through Space and Time is the group’s fifth full-length, and the second to appear on Ripple Music.

It’s always a concern — at least I find it is for me — when a band follows up a record you remember being really good. When I first heard that these guys were going to have a new album after how much I enjoyed 2013’s Fate is Your Muse, my initial reaction was excitement, but then a bit of trepidation, wondering if the new stuff could live up to the hype I’d mentally created for it. Far too often the first thing you hear from a band will blow you away — especially if you didn’t really know what to expect before hearing them for the first time — but then subsequent releases have such a high bar already set for them, they could end up being a disappointment, even if they are “very good.”

Well, those worries immediately abated within about thirty seconds of this record’s opening track “On and On (In Your Mind).” I feel like I could just tell you to go listen to that song (it’s one of the videos included below — as a side note, both of these bands really seem to like making videos for a lot of their albums’ songs!) and then go buy the damn record. But I’ll make an effort not to be so lazy. This first song features some nice blazing stoner-doom riffs, vaguely Spanish-classical-sounding melodies, and excellent vocalization in a sort of 70s occult metal meets 90s hard rock style, with harmonies not unlike the last band we discussed (perhaps unsurprising, since the lead vocalist here provided one of the harmonized parts on Of Woe and Wounds!)

The rest of the album follows suit nicely — generally tracks that strike a Graveyardesque balance between uptempo raucous songs and dark, doomy vibes, with vocals that blend classic metal melodiousness with a Sponge or Toadies semi-gruffness. Not too far removed from all of that, but definitely done in a distinctively unique style is the song “Your Inner Lemmy,” which was done in honor of the late Motörhead leader, and emulates that band’s sound so well that you might be excused for imagining it was actually a cover of one of their songs, rather than the lovingly-crafted tribute that it is.

Add Of Woe and Wounds to your collection here and A Bend through Space and Time right here.